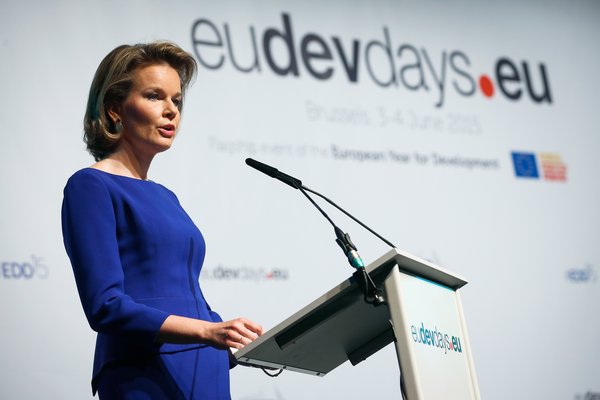 Mathilde, Queen of the Belgians, speaking at the 'Right to quality education' session.
Photo: © European Union

“Our world, our dignity, our future”

The European Development Days were held in Brussels/Belgium in early June, under the motto “Our world, our dignity, our future”. They formed the core event of the European Year for Development, declared by the European Commission for 2015 under the same motto. In more than 130 sessions, around 5,000 participants discussed burning development issues arising from a wide spectrum of cross-sector topics ranging from citizenship, inclusion, gender and human rights through food, education, health, climate and energy to financing, growth, jobs, migration and trade.

“Move up or move out”

Alone 13 of the sessions at the meeting centred on the topic of food and nutrition security. More than once, the key role that small-scale and family farming has in this context was stressed. After all, today’s small-scale farming concerns some 2.8 billion people and accounts for 30 to 60 per cent of the world’s least developed countries’ gross domestic product. The participants in the ‘Small-scale farming and sustainable food systems’ session emphasised that by supporting this model, millions of families could live decently from their work.

“Smallholders should be treated as a business, and we need a strategy to either move them up or move them out,” said Shenggen Fan, Director General of the International Food Policy Research Institute (IPFRI) in Washington. It was not fair to keep them on farms that could not sustain them adequately. In addition, there was the danger of their perpetuating the cycle of food insecurity – poverty – unsustainable production, because, for example, they were forced to manage already degraded land. At policy level, unsustainable subsidies such as those for water and fertilisers should be removed, and these resources  should instead be used to help small farmers to produce more – and especially more nutritious – food and to gain access to markets.

These demands were supported by Adriana Opromolla, International Advocacy Officer at Caritas Internationalis. Opromolla presented the results of an international survey on food security among its 160 members showing that the principal causes of food insecurity are a lack of resources such as land and seed, the absence of finance/loans, poor access to markets, low agricultural productivity and the impact of climate change. However, the report also demonstrates that there are significant differences from one continent to another. Whereas in sub-Saharan Africa, low productivity and climate change are key problems, in Asia, the priority is a lack of access to resources and a lack of governance. In Latin America and the Caribbean, the main problems are seen as food prices, speculation and a lack of infrastructure. And in the Middle East, the key issues are conflict and the lack of clean water.

A further option to empower smallholders is to help them get organised. This is being carried out, for example, by Caritas in Ethiopia, as Abdelghani Sourji, senior consultant for agriculture and rural development, explained. Although the country has around 30,000 agricultural cooperatives, as the state has pushed the farmers to create cooperatives at a very rapid pace, many of them lack infrastructure and resources. Caritas is helping them not only to build storage facilities to buy and sell grain and to store inputs, but also to build the infrastructure for cooperative unions. The unions are providing services for their members such as improved seeds, technical services and loans/credit services. The cooperatives are run as businesses that have to make a profit and sustain themselves. Sourij also reported that Caritas had helped set up a guarantee fund in which the risk was shared 50-50 with a cooperative bank. In addition, the organisation launched an asset building programme to help the poorest smallholders buy small ruminants and seed. Owing to droughts occurring every three to four years, many of the farmers in the project region are forced to sell their assets, making them dependent on food aid.

“We must invest more in nutrition security,” stressed Jean-Pierre Halkin, Head of the Rural Development, Food and Nutrition Security Unit at the European Commission's Directorate-General for Development and Cooperation. “We must also make agriculture and the food system more sustainable by using fewer resources.” By 2050, developing countries would need twice as much food as today. Here, priority had to be given to producing more nutritious food and using less water and other inputs. There was no single solution to this. The participants in the session ‘Feeding the planet together’ agreed that improved technology, better financing, improved education, easier market access and good governance all had to go into the mix.

“We don’t need a green revolution in Africa. It was conceived at a point when we had cheap energy,” maintained Patrick Caron, Director General for Research and Strategy of the French Agricultural Research Centre for International Development (CIRAD). “The context is different now, and the solutions that worked yesterday won’t work today or tomorrow.” Caron called for a global revolution in agriculture, a technologically smart revolution that would contribute to development and was sustainable. The panellists stated that the need for productivity to rise was undisputed. At the same time, the problem of wastage had to be tackled, given that a third of all food world-wide was lost. Measures were necessary not only to increase food availability, but also to protect the environment.

A vote in the audience showed that a majority felt that addressing climate change and focusing on sustainable development offered the best routes to achieving food security. While better technology would clearly be important, the panel was less certain about greater mechanisation in sub-Saharan Africa, where many farms were too small for tractors to be of much use. But greater mechanisation, together with more technology, could help to attract young people to farming; 350 million young people were joining the labour force in Africa over the coming 15 years, and other sectors were not able to provide the jobs.

With 160 million children stunted and millions more suffering from micronutrient deficiencies, global malnutrition remains an urgent development challenge. Malnutrition contributes to half of child deaths world-wide. But until now, only one per cent of Official Development Assistance has gone to addressing the problem, as Melinda Gates, Founder and co-chair of the Bill and Melinda Gates Foundation, criticised. In the session ‘Joining forces to make undernutrition history’, several initiatives were introduced. Germany’s Parliamentary State Secretary to the Development Minister, Thomas Silberhorn, presented the ‘One World – No Hunger’ initiative which was launched by the German Government last year and is backed with 1.4 billion euros annually. Silberhorn explained that the programme had two main goals: to address hunger and malnutrition now by focusing on women and nursing mothers, and to ensure that future generations had food by working on value chains in food production from the farm to the table.

Nigeria ranks second in the world in both deaths due to malnourishment and stunted individuals. With its endowment of 1.25 billion US dollars, Nigeria’s Dangote Foundation was making inroads in the battle against malnutrition, Zourera Youssoufou, Chief Executive Officer of the Foundation, explained. Youssoufou cited the example of the Foundation’s nutrition programme, which feeds 10,000 people three times a day, 365 days a year. Also, an economic empowerment programme helps people find ways to earn better incomes. Youssoufou argued that women’s empowerment had to be a key element of the drive as they were important players in their roles as farmers, consumers and mothers. This initiative would include encouraging mothers to breast feed, returning to what had always been the traditional method of feeding infants. The Foundation was also working to encourage more investment in the area by the African private sector and local philanthropists. “The reality is that most of our problems have to be solved by ourselves in Africa”, Youssoufou maintained. Here too, several speakers noted that nutrition could not be tackled by addressing any single cause. Linkages had to be made among a range of development issues, including agriculture, health, water and sanitation, and education.

Migration – a driver for development

“Migration is development. Development is migration. They go hand in hand,” maintained Dilip Ratha, Head of the World Bank’s Global Knowledge Partnership on Migration and Development (KNOMAD). Migrants’ remittances were a major source of revenue and development for their home countries, he emphasised. So were the savings built up by the diaspora and their massive support for philanthropic projects. Officially recorded remittance flows to developing countries are estimated at 382 billion euros for 2014, which represents three times the volume of official aid flows to developing countries.

Laura Thompson, Deputy Director-General of the International Organization for Migration (IOM) reminded the meeting that, as well as being workers, migrants were potential employers, entrepreneurs and investors. Facilitating legal channels and safe migration was important, she emphasised – also for enabling migrants to contribute to the societies of destination. More emphasis had to be given to protecting migrants’ human and labour rights and their health, she said. The panellists acknowledged that these demands had also been taken up in the Sustainable Development Goals (SDGs), to be adopted by the United Nations in September. Notably, migrants are mentioned in the SDGs on protecting labour rights, facilitating orderly, safe migration, and reducing the transaction costs on migrants’ remittances to less than three per cent by 2030.