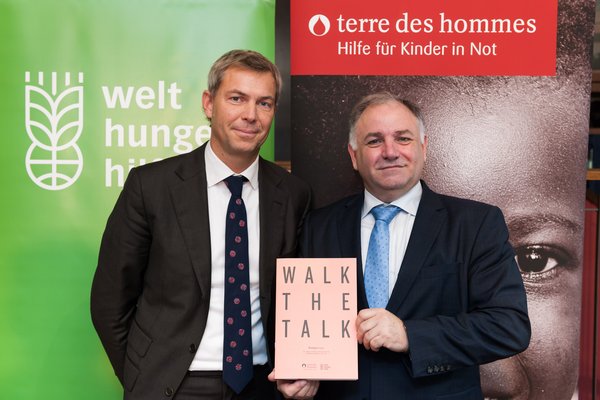 Jörg Angerstein, Board spokesman of terre des hommes (r) and Dr Till Wahnbaeck (l), Chair of Welthungerhilfe at the presentation of ‘Kompass 2030’.

In the report ‘Kompass 2030 – the reality of development policy: WALK THE TALK’ terre des hommes and Welthungerhilfe put German development policy to critical analysis, taking into account specifically the demands that the UN sustainability agenda adopted in 2015 makes on German policy.

The German Federal Government is increasingly placing development cooperation in the interests of domestic politics, according to the authors of the report ‘Kompass 2030 – the reality of development policy’. The report was presented in November 2017 by Welthungerhilfe and terre des hommes. The authors are concerned that achievement of common global goals and standards could fall behind.

Although Germany spent 0.7 per cent of GNP on development cooperation for the first time in 2016, putting it in second place among the biggest donors of the DAC nations, domestic costs for supporting refugees accounted for one quarter of German official development assistance (ODA). The report notes that the ODA funds rose only by one-fifth in ‘real’ terms, to a share of 0.52 per cent.

“This means that Germany must provide the agreed 0.7 per cent of GNP for the poorest countries, and the costs contained here for supporting refugees in Germany, which account for one-quarter of development aid spending, should be added to this,” says Jörg Angerstein, Board spokesman of terre des hommes.

The main recipients of German grants are emerging nations such as China and India, while there is just one country from Africa south of the Sahara under top ten recipients – South Africa. Only around one-seventh of Germany’s total ODA goes to the Least Developed Countries. According to the latest available figures, cooperation in 2015 fell to the lowest level since 2009 at EUR 22.34 billion.

The authors criticise that development cooperation needs to be aligned with Agenda 2030, and place particular value on the four fields of action: poverty, hunger, migration, and children. They also call for strengthening civil society actors in the partner countries.