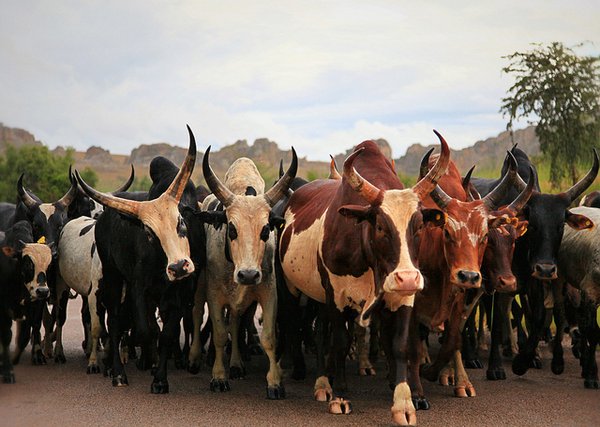 The CIRAD experts are very positive that the eradication programme should enable the intensification of livestock production while preserving the environment.
Photo: © Franx'/flickr.com

African animal trypanosomiasis is still the main obstacle to the development of livestock production in sub-Saharan Africa. To fight the disease, effective methods are now available for eradicating the tsetse flies that transmit it.

In Senegal, the government has launched a vast campaign to control animal trypanosomiasis, based on eradicating the tsetse flies that transmit this formidable disease.  The campaign includes trapping the flies, treating livestock with insecticides, and also aerial releases of sterile male flies during the eradication phase.

To target control operations better, researchers from the French research institute CIRAD and other research partners have been using species distribution models that can characterise very precisely the habitat of a species and predict its preferred sites, using environmental data. The results are a more effective control campaign and substantially reduced costs.

In order to implement integrated control, it is vital to know in detail the ecology of the population of tsetse flies, Glossina palpalis gambiensis, found in the Western African region. According to the CIRAD experts, this knowledge will serve to target the sites where insecticide traps will be installed and sterile insects released, and also to monitor more effectively the decline in tsetse fly population levels. Using species distribution models can be particularly useful in this respect, writes CIRAD in a recent press release.

The researchers used three types of models: an ENFA (ecological niche factorial analysis), a regularised logistic regression model and a Maxent (maximal entropy) model, the last of which proved to be best at predicting the flies' preferred sites.
By combining high spatial and temporal resolution environmental indicators (Landsat ETM+ and Modis images), the models enabled them to characterise very precisely the habitat of the species ― its ecological niche ― and to predict the sites propitious to its survival.

They determined that the tsetse fly lived in permanent habitats with dense tree cover, either natural or human-made, with temperate macroclimatic conditions in terms of temperature and relative humidity.

In practice, the study enabled the researchers to target the habitats in which traps impregnated with insecticide would be most effective, resulting in a rapid fall in tsetse fly population density. They were also able to determine the number of sterile males required to eradicate the remaining tsetse flies and to parameterise the automatic machine installed on a gyrocopter to release the sterile males, based on the extent of the habitats propitious to tsetse flies as predicted by the model.

Lastly, the location of those habitats was used to assess precisely the impact of the control campaign on tsetse fly population density.
In short, using species distribution models resulted in a substantial reduction in the cost of the control programme.

A project that is cost-effective in the medium term

The CIRAD experts are very positive that this eradication programme should enable the intensification of livestock production while preserving the environment. It was combined with a socioeconomic study to assess the financial impact, which revealed that for a total cost of around € 6 400 per square kilometre, animal product sales (milk and meat) by farmers could be boosted by almost € 2 800 per square kilometre per year, with a 45 percent reduction in herd size.

In line with the chosen scenario, this result would be obtained in the more or less medium term, with a payback period of between 13 and 18 years, say the experts.
CIRAD researchers strongly believe that eradicating tsetse flies will change livestock production systems. Traditional farms, based on trypanosomiasis-tolerant cattle, will be intensified, adopting improved races that could not previously be reared as they are too susceptible to trypanosomiasis, such as local zebus more appropriate for meat and milk production, or exotic cattle races for dairy production.