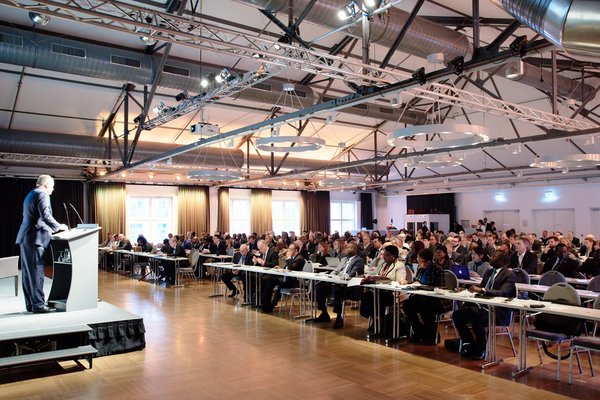 New kids on the block

“From Agricultural Farming to Food Processing and Distribution – opportunities and challenges along the value chain” was the title of the 4th German-African Agribusiness Forum. The German-African Business Association, together with the German Agribusiness Alliance, held the conference on the 22nd January 2018 in Berlin, Germany. Next to German private sector partners several African Agriculture Ministers presented their countries and their investment potentials in the sector.

"So far the agricultural sector in Africa has been mainly attributed to the field of development co-operation. But no region in the world has reached the industrialisation of the economy without first modernising its own agriculture. In order to generate added value in Africa, investment in processing must be made more attractive and marketing more professional. With appropriate foreign trade promotion, the German medium-sized agricultural sector can be a good partner for Africa – especially in the production of fertilisers and agricultural machinery as well as in the food and packaging industry," said Stefan Liebing, chairman of the German-African Business Association (Afrika-Verein der deutschen Wirtschaft – AV), opening the 4th German-African Agribusiness Forum in Berlin.

"African governments have recognised the importance of the agricultural sector for the economic and social development of their countries and are currently investing billions in a more productive agriculture", Liebing noted. "The African Development Bank (AfDB) itself wants to put about 24 billion US dollars into agriculture and agribusiness by 2025. Together with all stakeholders, we want to explore options and perspectives for the agricultural sector in Africa today.”

In order to develop in a timely manner, agribusiness in Africa needed not only responsible entrepreneurs, investing in large farms, but also co-operatives and communities of small farmers. These communities created synergies and scale projects. For example, pre-financing of the seed was made possible and the market position of producers was improved. "Germany has a lot of experience in founding co-operatives. After all our ‘big farmers’ started out as small farmers at some point," remarked the AV chairman.

“Africa has arable land still unused, fertile soils, water resources and people. But we have a lack of markets, technology, expertise and infrastructure Therefore we need investments,” Theo de Jager, president of the World Farmers’ Organisation and a South African farmer, clearly pointed out, adding that “markets do not know mercy”.

Gabon, Equatorial Guinea, Zambia, Zimbabwe, Sierra Leone, Uganda and Tunisia, represented by their agriculture ministers, actively participated in the meeting. All these countries are keen to step up investment in their agricultural sector. Representatives from Algeria, Togo, Ethiopia, Kenya and Côte d’Ivoire were also present, amongst others.

Different working groups spotted the light on aspects of the value chain. Interested participants could choose between

The 4th German-African Agribusiness Forum – "From Agricultural Farming to Food Processing and Distribution" – was organised by the German-African Business Alliance together with the German Agribusiness Alliance. The conference was one of the side events of the International Green Week in Berlin/Germany. More than 300 participants attended the event.