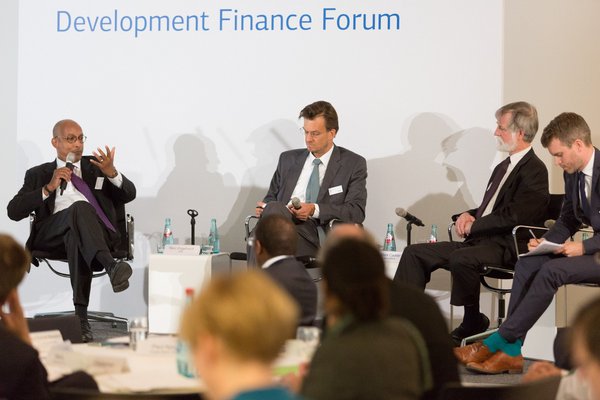 Ibrahim Hassane Mayaki, NEPAD and former prime minister of Niger, talking at a panel discussion at the KfW Forum in Frankfurt.
Photo: © KfW

There can be no development without a secure food supply, which is why food and nutrition are the top priority in German development cooperation, as Stephan Opitz, Member of the Management Committee of KfW Development Bank noted to the hundred or so international representatives of politics, business, universities and research, and civil society who had been invited to the KfW's first ‘Development for Finance Forum’ in Frankfurt/Main in July. He explained that the goal was to work with a selected group of experts from the agricultural, health and financial sector on formulating for solutions that would give humanity not only sufficient food but also sufficiently nutritious food, even in 2050, given that more than two billion people already suffer from ‘hidden hunger’, which is linked to serious negative consequences for human development from the cradle onwards.

Thanks to the results of research in the past ten years, the importance of nutrition security has come to the attention of political decision-makers, which has resulted in a revision of priorities in German development cooperation, as Christiana Hieronymus, Head of the 'One World – No Hunger' Division of the Federal Ministry for Economic Cooperation and Development (BMZ), explained. This has also led to recognition of the key role of the agricultural sector, and the fact that it is crucial to give the world's farmers better access to improved education and training, modern technologies and financial services. Hieronymus stated that the BMZ is making a contribution to this by creating ten development centres, currently under construction in Africa and Asia. She quoted the example of Kenya, where one of these centres will expand the dairy industry in west Kenya through knowledge transfer, financial services (such as credit and insurance) and extension work.

In his keynotes, Dr Matin Qaim, professor at the University of Göttingen, summarised the global move towards achieving MDG 1, noting that the prevalence of undernourishment had declined from 23 per cent in 1990 to 13 per cent in 2014. However, he warned against being too satisfied with this achievement, as things are looking down: while agricultural production is rising, it will still be unable to keep up with the even faster rise in demand, which will hurt the world's poor. Qaim sees a possible solution to this problem in increasing investment in rural areas, particularly in the infrastructure and direct interventions in favour of the poorest population groups to improve their poor nutrition. One example he gave was micronutrient supplement programmes for women and small children. Estimates suggest that the USD 10 billion invested in these programmes could reduce child mortality by 15-20 per cent.

Another intervention Qaim proposed was pro-poor growth programmes involving investment in irrigation, electricity, roads, access to digital services, education etc, which would require support from the financial sector for their implementation. Qaim also noted the need for dietary diversity in human nutrition. Although the green revolution succeeded in securing food worldwide, he warned that in many regions this had been at the expense of dietary diversity, and proposed giving new emphasis to neglected crops and livestock as a way of achieving better nutrition for families on small and subsistence farms.

Dietary diversity and local markets were also the subject for Steve Wiggins, professor at the UK's Overseas Development, Institute (ODI), who complained that these local markets no longer function, particularly in Africa. Wiggins emphasised that these markets could above all create an important link to the urban centres, both for supplying the cities with fresh food (for example, from home gardens) and as a valuable source of income for the rural population. Given this, he called for additional investment in the urban-rural infrastructure in particular, including investment in sanitation, and safe drinking water and ‘water education'. Wiggins cited statistics which credited sanitation and safe water measures for the decrease in the proportion of stunted children from 54 per centin 1970 to 29 per cent in 2010. He emphasised that “Investing in rural infrastructure is a human right of the rural people”.

Dr Ibrahim Hassane Mayaki, former Prime Minister of the west African nation of Niger and CEO of New Partnership for Africa's Development (NEPAD), sees the political neglect of rural areas in virtually all African nations as one of the key reasons for the lack of investment in these areas. He argued that the ministries of agriculture generally play virtually no role in the governments, and called for urgent rethinking by the latter, including upgrading the agricultural sector to be an equal partner with the other sectors, and considering food security as a multi- sectoral and interministerial task. Mayaki also called for rethinking the promotion of commercial and small-scale farming, moving away from considering them as opposed to each other and towards a comprehensive approach, e.g. contract farming.

How to achieve sustainable improvement in food and nutrition security through investment in the agricultural sector was one of the most important questions for the KfW Forum, and the answer offered by Keith Palmer, chairman of AgDevCo, London, was that the reason for the failure to date in improving the income of farmers in Africa is not because of a lack of funding, but because of a lack of opportunities for funding. He proposed using pump-priming financing to link small-scale farmers to the value chain, and so unlock the chain as a whole. He argued that small-scale farmers must be given access to patient, long-term credits to enable them to test new crops and farming methods.

Palmer used the example of a funding concept for maize farmers in Mozambique to show how allocation of patient capital enabled farmers to enter into a long-term contract with a local mill, have the maize certified, and create sufficient storage for the harvests. The profits were then reinvested in early-stage businesses.

Wrapping up the Forum, participants agreed in particular that food and nutrition security can only be addressed from a multi-sectoral perspective, and that this is not just an agricultural issue but one where health, water, education and better urban-rural infrastructure play an equally significant role. Investment should be used for improving productivity, the quality of food and neglected crops, and – above all – for substantially improving the infrastructure and educational and training services. This requires a financing framework with long-term orientation.