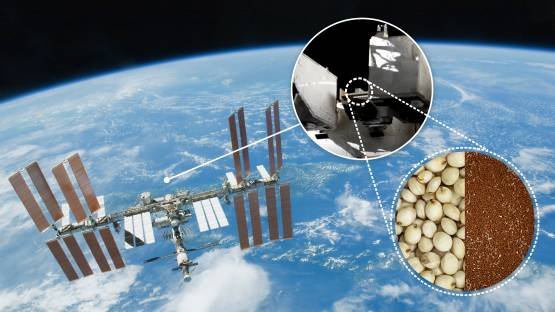 Arabidopsis and sorghum seeds are being exposed inside and outside of the International Space Station for about three months.
Photo: © IAEA/FAO

The International Atomic Energy Agency (IAEA) and the Food and Agriculture Organization of the United Nations (FAO) launched seeds into space last November as part of their joint efforts to develop new crops able to adapt to the ravages of climate change here on Earth.

Seeds launched into space in November last year have now been positioned inside and outside the International Space Station to be exposed to the full range of cosmic radiation and the extreme temperatures of space, according to a recent press release of the International Atomic Energy Agency (IAEA).

This astrobotany investigation, an undertaking of the IAEA and the Food and Agriculture Organization of the United Nations (FAO) through their Joint FAO/IAEA Centre of Nuclear Techniques in Food and Agriculture, aims to explore the effects of cosmic radiation on seeds as part of ongoing research into strengthening crop varieties to withstand the effects of climate change and increase global food security. The aim is to determine whether the harsh conditions of space, such as extremes of temperature and cosmic radiation, will lead to evolutionary changes in the seeds, and in turn, whether those changes could help plants become more resilient in the face of increasingly difficult growing conditions on Earth.

“We have a responsibility to explore nuclear techniques that could make a positive difference to human health and food supplies,” said Najat Mokhtar, IAEA Deputy Director General and Head of the Department of Nuclear Sciences and Applications. “As the world grapples with adapting to consequences of climate change, we need to speed up with plant breeding research to find adequate and cost-effective solutions.”

Arabidopsis and sorghum seeds were launched into space from NASA’s Wallops Flight Facility in Virginia, USA, on the 7th November 2022 as part of the cargo load of the CRS2 NG-18 mission to the ISS. On the 13th December, half the seeds were moved to the ISS Nanoracks external platform. The other half have been kept inside the ISS for comparison, exposed mainly to microgravity and to some levels of radiation.

Spontaneous mutations arising from exposure to different conditions in the environment are the bases of evolution in all organisms, and the IAEA and FAO, through the Joint FAO/IAEA Centre, have a long history of supporting countries in finding new crop varieties with desirable traits through radiation-induced mutagenesis techniques, improving food and nutrition security and farmers’ income.

Arabidopsis and sorghum seeds were selected for the study because there is already a large bank of genetic knowledge to draw up for analysis and comparison. Arabidopsis has been studied extensively by plant botanists and geneticists, while sorghum is a crop of the semi-arid tropics, a grain that is grown in many developing countries for food.

The Joint FAO/IAEA Centre, based in Vienna/Austria, has been speeding up plant breeding research using radiation to develop new agricultural crop varieties for almost 60 years. In the history of plant agriculture, natural selection or evolution breeding, also called mutation breeding, have been the drivers of crop domestication and plant breeding. They are responsible for the genetic adaptation of plants to their changing environments and lead to the improvement of crops. So far, over 3,400 new varieties of more than 210 plant species have been developed using radiation-induced genetic variation and mutation breeding — including numerous food crops, ornamentals and trees used by farmers in 70 countries.

When the seeds return from space, currently expected in April 2023, they will be germinated and grown in the IAEA greenhouses and laboratories in Seibersdorf/Austria, managed by the Joint FAO/IAEA Centre, and examined for DNA structural variations and biological effects.  These analyses will help understand whether cosmic radiation and space conditions have a uniquely valuable effect for crop improvement and could potentially benefit people on Earth.

Joint FAO/IAEA Centre of Nuclear Techniques in Food and Agriculture