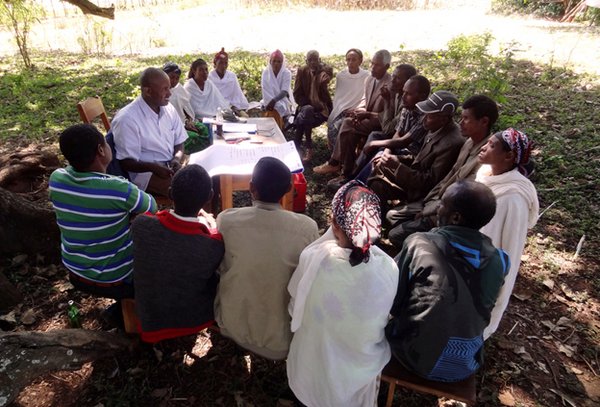 Researchers in the BiomassWeb project interviewed around 400 farmers in Southwest Ethiopia in order to identify the biggest food security risks in these areas.
Photo: © Till Stellmacher/ZEF

The first pan-African expert network on food and non-food biomass has been launched by Germany’s Center for Development Research (ZEF) and the Ghana-based Forum for Agricultural Research in Africa (FARA).

Biomass has already found use in areas ranging from high-rise buildings incorporating timber structures to energy production based on algal fuel or the use of enzymes to reduce effective washing temperatures. Africa is facing a growing demand for biomass, which can not only provide industrial raw materials and energy but also holds a huge income potential. However, many of the continent’s countries are still struggling to attain food security. BiomassNet, the first pan-African expert network on food and non-food biomass, aims to support African countries in achieving food security while simultaneously developing sustainable bioeconomies. The network was launched by the Center for Development Research (ZEF) and the Forum for Agricultural Research in Africa (FARA), in mid-July.

A biologisation of the economy

Addressing the BiomassNet inauguration and networking meeting in Bonn, Germany, Professor Joachim von Braun stressed the bioeconomy’s dependence on value webs, as opposed to value chains. “Bioeconomy processes are pervasive. They cut across sectors, biologising the economy itself,” German Bioeconomy Council Chair von Braun noted. Material from biomass production could be directly used. It could be processed and incorporated in new, biobased products. And biological intelligence could be applied in novel products and processes. Von Braun is also Director of ZEF, an international institute affiliated to the University of Bonn that conducts interdisciplinary research on development-related issues.

Von Braun pointed to the vital role that science and innovation played in solving problems such as the seemingly conflicting goals of food and feed, bioenergy and nature and natural resource conservation. And he emphasised the need for a clear measurement of progress in the bioeconomy. “What is its share of GDP and employment? What is the share of renewable biobased content? We must have outcome measurements, and we need to know what the impact on the wellbeing of people is like,” von Braun told the meeting.

Issues like these are where BiomassNet comes in. It aims to promote the production, processing and trading in Africa of biomass, which, according to the developers of the scheme, will enhance food security and support knowledge-based bio-economies by facilitating exchange and discussions among stakeholders.

From value chains to value webs

The new initiative is an output of BiomassWeb, a project already started by ZEF and FARA in 2013 to provide concepts to increase availability of and access to food in sub-Saharan Africa through more and higher-value biomass for food and non-food purposes. According to Dr Manfred Denich, Project director at ZEF, BiomassWeb seeks to promote the shift from value chains to value webs and is also there to enhance the impact of research on processes in the bioeconomy. The scheme is supported by a wide range of partners, including the private sector, research centres and universities in Germany and throughout Africa. A number of research projects have been carried out in the context of BiomassWeb, covering issues such as risk analysis among Ethiopian smallholders and the problem of Africa’s rising demand for staple food versus dwindling available cropland.

“BiomassNet provides an interactive platform for science, politics, decision-makers and practitioners,” explained Christine Schmitt, BiomassNet co-ordinator at ZEF. “It is also there to disseminate research results and spread ideas.” Schmitt above all stressed the potential of the new network to promote knowledge-sharing and exchange among countries in sub-Saharan Africa. BiomassNet is sponsored by two of Germany’s Federal Ministries, Education and Research (BMFT) and Economic Cooperation and Development (BMZ).

Do not compromise food production and the environment

“The challenge is to attain food security in Africa while also developing biomass as a source of energy and other non-food products,” Dr Raymond Jatta, Programme Co-ordinator at FARA, told the meeting. “This requires a scientification of relevant issues such as the shift from a fossil-fuel based to a biomass-based economy.” In this context, Jatta maintained, BiomassNet could play an important role in facilitating change. Based in Accra, Ghana, FARA was established in the late 1990s by academics and donor aid officials and now acts as the technical arm of the African Union Commission on agriculture science, technology and innovation issues.

Adebayo Abass of the International Institute of Tropical Agriculture (IITA) noted that many African countries had already adopted the bioeconomy in their policies. Abass stressed the need for training more academics in the field. He reckoned that industries could already be producing from biomass with new technologies in Africa by 2020, and that such industries could account for up to 20 per cent of the continent’s GDP by 2030. “The important points are that we produce with, rather than export, biomass, and that we do not compromise food production and the environment,” Abass said in Bonn.