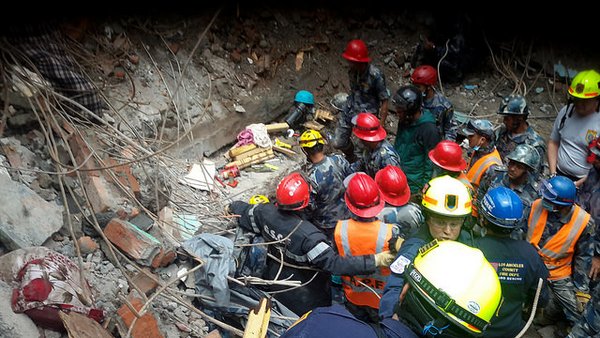 An estimated eight million people are affected by the disaster, among them villages in the most vulnerable agri-cultural areas of Nepal.
Photo: © USAID/Flickr.com

The impact of the recent major earthquake in Nepal on food security and agricultural livelihoods is expected to be very high. Farmers who miss the planting season that is expected to start from late May onwards will be unable to harvest rice – the country’s staple food –again until late 2016. This, together with likely losses of food stocks and wheat and maize harvests, would severely limit food supplies and incomes in the South Asian country, where around two thirds of people rely on agriculture for their livelihood, the UN Food and Agriculture Organization (FAO) warns.

Agricultural areas among the worst hit

An estimated eight million people across the country’s Western and Central Regions are affected by the 7.8 mag-nitude earthquake that shook Nepal on the 25th April 2015, killing thousands of people while limiting access to food and leaving some 3.5 million in need of food assistance.

Although damage to the agriculture sector has not yet been assessed, affected families are likely to have lost live-stock, crops, food stocks and valuable agricultural inputs. At the same time, the disaster has destroyed markets and infrastructure, including roads and crucial irrigation and drainage canals. As a result, internal trade, including the movement of emergency assistance, is severely constrained.

Before the earthquake struck, the FAO estimated Nepal’s wheat production in 2015 at 1.8 million tonnes – some 5 per cent below last year’s record harvest. But crop damage and the inability of farmers to harvest in earth-quake-affected areas are likely to change this forecast. In addition, disruption of planting operations for rice and maize may severely reduce the planted area for these crops in the worst-hit areas.

In addition to distributing crop-production packages to secure this year’s harvest, the FAO and its partners have agreed to support the Nepalese government in preventing further loss of livestock by provid¬ing animal feed and veterinary supplies that will ensure that animals stay healthy and productive for families relying on them for food and income. In all, the FAO will help 20,000 of the most vulnerable farming households protect and rebuild their livelihoods. Timely agricultural interventions are essential to increase the resilience of affected farming families and greatly reduce the time and cost of recovery.

“There is a critical window of opportunity to help crop producers plant in time to have a rice harvest this year and regain their self-sufficiency,” said Somsak Pipoppinyo, FAO Representative in Nepal. “At the same time, we need to do all we can to preserve vital livestock assets which provide affected families with much needed income and nutrition.”

UN agencies and their partners have launched a 415 million US dollar emergency appeal for Nepal to address the most urgent needs. The FAO’s appeal is part of a larger 128 million US dollar request under the Food Security Cluster, led by the FAO and the World Food Programme. In addition to emergency agriculture support, the cluster aims to distribute 50,000 tonnes of food to families in need, along with setting up cash-transfer programmes and helping communities rebuild.