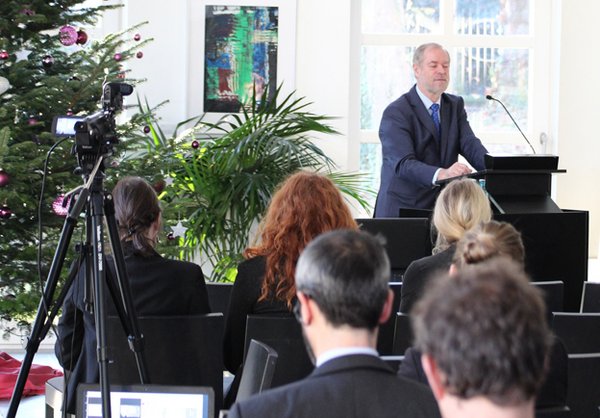 “Diasporas are an important channel to increase the economic gains of migration”, Klaus Zimmermann noted in his keynote lecture.
Photo: © ZEF

Migration as an opportunity for development

The European Development Conference 2016 invited around 200 participants to Bonn, Germany, in December to discuss the impact of migration on development.

Migration has increased by 40 per cent over the last two decades. According to the Organisation for Economic Co-operation and Development (OECD), 213 million people were living outside their countries of origin in 2010. Flows of people coming from developing countries are on the increase and comprise both legal economic migrants, refugees, asylum-seekers and illegal migrants. South-South migration flows are roughly as large as South-North flows.
And the annual amount of remittances, totalling USD 414 billion in 2014, is about three times as large as Official Development Assistance (ODA). Challenges posed by migrants in recipient countries have resulted in resistance to migration in some cases, such as in the USA, the UK or Austria. The “toxic policies” of these countries called for rational policy debate informed by research, Stefan Klasen, President of the European Development Research Network (EUDN), told the European Development Conference 2016 in Bonn, Germany. The event, which focused on “Migration and Development”, was organised by EUDN and the Bonn-based Center for Development Research (ZEF).

In his keynote lecture, Klaus Zimmermann, a professor of economics at Harvard University (USA), looked at the risks and opportunities of migration for development prospects. Zimmermann noted that global and demographic changes were resulting in an overall greater provision of human resources, and also in higher education levels. Ethnic diversity, political conflict, tensions in developing countries as well as an increase in natural disasters were causing the forced migration potential to rise. At the same time, new challenges were emerging in the shape of anti-migrant and anti-globalisation sentiments and national egotisms. Policy-making was seeing a shift from evidence-based to evidence-free. Against this background, economic rationality was gaining significance.

Zimmermann also stressed the role of diaspora economics in development, referring to diasporas as “an important channel to increase the economic gains of migration”. Rejecting notions of stemming the flow of migrants by spending more on development co-operation, he pointed out that this had not been particularly successful. Moreover, those migrating were not necessarily among the poorest. “The best development policy is to use migration as a possibility to foster development,” Zimmermann concluded.

Introducing a panel debate on the impacts of migration on developing countries, Hillel Rapoport, a professor of economics at University Paris 1, Panthéon-Sorbonne, France, discussed various externalities of migration, such as the significance of remittances for countries of origin. Money sent back home could boost welfare but could also stir conflicts. Furthermore, there was a danger of remittances leading to some parts of the local economy benefiting from the inflow of money while others suffered decline.

While acknowledging the significance of the brain drain, Rapoport also pointed out that circular migration – with migrants returning to their home countries after a certain period – bore the potential to diffuse knowledge and technology. History had shown that diaspora networks promoted economic integration. Furthermore, migratory processes could lead to the transfer of behavioural and cultural norms to countries of origin. For example, foreign-trained individuals could improve the prospects for democracy in their home countries. Rapoport generally noted the trade-boosting effect of migration, e.g. through migratory processes spreading information on products and markets and language skills facilitating communication.

Ahead of the panel debate on improving migration processes, Dean Young, a professor of economics at the University of Michigan, USA, summed up the general benefits of remittances in migrants’ countries of origin, including higher household consumption, lower poverty rates, and also support in times of acute need. In the Philippines, for example, the 1997-98 economic crisis brought about drastic improvements in the USD exchange rate that heavily benefited remittances.

This caused education levels to rise and led to higher school attendance, more vehicle ownership and increased entrepreneurship. Young explained that migration could offer huge wage gains, in some cases several times the amount earned at home. He also stressed the importance of migrants maintaining some form of control of remittances. The highest level of saving was achieved if they themselves were solely in control. Pre-departure education and training measures could greatly enhance economic prospects for migrants, particularly with regard to language skills and financial literacy.

The debates reflected a general opinion that migration has a positive impact on development. But they also highlighted the need for policies facilitating migratory processes and benefiting migrants both in recipient countries and countries of origin.