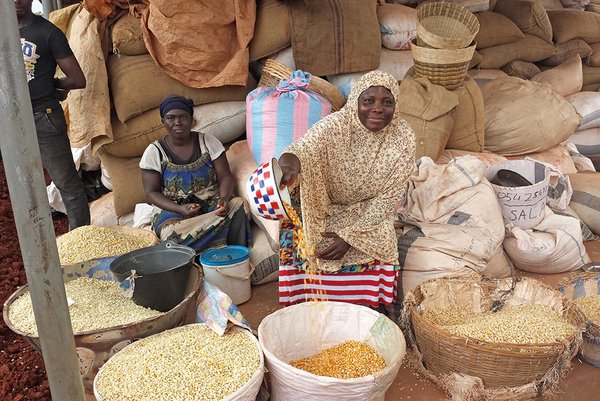 The earlier quality is measured in the agricultural value chain, the more efficiently and sustainably farmers can reach higher quality of their products. However, there is still a lot to catch up on in providing such services for smallholders in particular. This article focuses on maize and pineapple value chains in Ghana to demonstrate what perceptions of quality there are and how the adoption of quality infrastructure services could be promoted.

Twenty-two per cent of Ghana’s GDP is produced in the agricultural sector, which currently employs 45 per cent of the country’s total labour force. The sector is characterised by a smallholder production base and low productivity. Agriculture plays an essential role – not only for peasants, but also for the growing middle class in Ghana’s cities who demand agricultural products from rural areas. In this exchange from rural to urban areas, trade is being stretched over much greater distances, requiring, in theory, transparent and universal communication on quality. The earlier quality is measured in the “farm-to-fork” sequence, the more efficiently and sustainably farmers reach higher quality. At the smallholder level, services to analyse product quality therefore need to be applied at the beginning of value chains. A team of the Centre for Rural Development (SLE) at Humboldt University of Berlin has examined the use of such services, focusing on maize and pineapple value chains in Ghana. They looked at smallholders who cultivate approximately 2 to 8 acres (0.8 to 3.2 hectares) of land and who sell their produce on local markets, national markets or even for export. The research focused on:

Since the capital of Accra hosts most quality infrastructure service providers and laboratories, the distance to the production sites and smallholders was considered in choosing the area to conduct the study in. For maize, the Brong-Ahafo region was selected as a highly commercialised production area, hosting the most important supranational maize market in Techiman. For pineapple, an interesting border area was chosen: the Volta region. It is located only half the distance from Accra as compared to Brong-Ahafo.

Aflatoxin in the maize value chain: a lack of quality awareness

Ghana produces 1.9 million tons of maize annually. The staple crop is utilised as whole grain for human consumption, in processed maize products (such as cornflakes or Banku flour), and as feed. Brong-Ahafo is the leading maize production region of the country, part of the maize is directly consumed by the poultry industry.

Aflatoxins play a major role in this context. Aflatoxins are toxic carcinogenic by-products of the moulds Aspergillus flavus and Aspergillus parasiticus. Mould is caused by insufficient drying and storage, in combination with humid, warm conditions. The Accra-based laboratories of the Ghana Stand-ards Authority (GSA) and the Food and Research Institute (FRI) are active in the detection of the highly poisonous mycotoxin. The maize standard GS 211 sets the national threshold value at 15 parts per billion. However, more than half of the maize samples tested in the laboratories of the GSA are above this limit. No farmer was found to perform aflatoxin tests in the observed regions. But if aflatoxin remains undetected at the farm level, the poison trickles further down the value chain with detrimental results.

Aflatoxin can be prevented by drying maize timely to the moisture level of 13 per cent, which is prescribed in the national maize standard. In order to safely determine the moisture level of maize, handheld moisture meters can be used outside laboratories. However, smallholders were found to be unaware of the link between aflatoxin and the moisture content. None of the smallholders interviewed actually used a moisture meter. Experiments that the research team carried out with 44 farmers indicate that traditional methods used to determine the moisture content, e.g. biting on maize grains, report the maize being, on average, over three per cent dryer than it actually is. This misjudgement raises the threat of infestation with moulds.

Quality does not seem to play a major role in the view of maize farmers and traders. This can partly be explained with the absence of the consumers’ quality exigencies. Therefore, there are no incentives for smallholders to invest in aflatoxin tests or moisture meters. Further obstacles include cash constraints of smallholders, as well as insufficient drying and storage facilities that restrict their ability to respond to test results. In contrast to smallholders, poultry farmers and processors check for moisture levels before storing maize and perform aflatoxin tests since they would otherwise be afflicted by high economic losses.
The bulk-good maize is traded in bags of various sizes. Instead of weighing the mass, the maize bags are arbitrarily filled and traded with different prices according to perceived moisture. Up to now, authorities have not used their power to rule trading maize only in kilograms as neighbouring Francophone countries do. At the same time, the Ghana Standards Authority has only been partially successful in convincing Ghanaians to trade by weight.

In the pineapple value chain, a low level of QI use was observed at the smallholder level. Only in the context of export is quality infrastructure utilised, mostly because of certifications that require QI. Large-scale pineapple farmers who certify their pineapple for the lucrative export business invest a lot of time and money in the related processes of obtaining the certification. For smallholders, it is practically impossible to obtain certificates for export without financial support. Only outgrower schemes allow smallholders to take part in group certification. GLOBALG.A.P.-certified farmers (GlobalG.A.P. is a retailer-based certifiation system for Good Agricultural Practice) are required to utilise all the QI services, such as soil analysis or the testing of pesticide residuals or sugar levels of the fruits. Interestingly, many exporters test in recipient countries and not in Ghana. One reason might be that the Ghanaian labs of the GSA can only test 36 out of 452 residuals for which the European Union prescribes maximum residue levels.

A considerable portion of the 40 to 50 per cent of harvested pineapples gets sorted out – mainly for optical reasons – before export, so that quality demands of the international customers are fulfilled. The second-grade pineapples are traded on the domestic market. Here the quality demands of consumers of fresh pineapples are limited to shape, taste and juiciness of fruits. This lack of pineapple value does not encourage smallholders to use QI services. Fruit processors have higher quality demands for the domestic market than consumers of fresh pineapples and give high attention to the sugar content and colour of fruits. Here, the Food and Drugs Authority (FDA) prescribes the full range of tests on the juice products before allowing juice production. For example, refractometers – handheld devices that determine the sugar content in pineapples – are commonly used by exporters, large producers and most processors since the sugar level directly affects the quality of the products. In contrast to juice makers, refractometer utilisation among smallholders is absent.

Not only the quality of agricultural products, but also the quality of the soil is an important parameter for smallholder production. The use of soil testing was studied where pineapple production takes place. Interviews revealed that smallholders are largely unaware of benefits from soil testing. Even if the potential is known, farmers do not know how to understand the test results, and there are only few developing agencies to help interpret the findings. Besides high costs for soil tests, another obstacle for smallholders is the lack of available specific fertiliser needed for a given soil fertility. Soil testing is regularly performed by larger producers, particularly when required for certification. While soil analysis laboratories are concentrated in Kumasi and Accra, eight agricultural colleges and farm institutes across the country have been found with the ability to offer commercial soil testing. These institutions also provide vocational training for extension officers.

The study found that pineapples on the local market are traded by piece. In contrast, the more transparent trade by weight is practised by large producers and processors, and when exporting pineapple. A few smallholders use scales, and a growing trend was observed. Smallholders using scales find weighing to be beneficial for them because there is no need for the time and labour intensive sorting and grading of pineapples.

In three cost-benefit analysis this study found concrete potential cases where economic benefits would occur if QI services were actually used. The observed case of a maize processing company testing and measuring its products contributed to a reduction of input losses and costs due to over-drying. The costs of purchasing a moisture meter were recovered because the savings are five times higher. This study further confirmed the losses that farmers incur due to the limited use of QI services. For example, it was found that pineapple farmers measuring fertilisers with matchboxes instead of scales overdose the fertilisers by 77 per cent, thus wasting money and potentially harming the environment.

How to promote the use of QI services?

In the course of the research, four general aspects emerged that determine the use of QI services. The demand for QI seems to be increased by smart management of both, voluntary and obligatory measures. In particular, consumers have not used their power to improve quality through consumer protection mechanisms. Centrality of quality infrastructure services seems to be a hindering factor for smallholders that the Ghanaian quality infrastructure, which has its laboratories in Accra and Kumasi, has yet to overcome. The observed inconsistent and unorganised maize and pineapple value chains do not contribute to the desired QI utilisation. Instead, this report finds that higher organisational levels of value chains and trust among their actors are conducive to an increase in quality. Looking at pineapple and maize products as well as the export business, the value of agricultural production proves to be the determining parameter for the use of QI in rural areas.

Quality infrastructure needs to be seen in the context of agricultural practices and processing. Given the large number of districts and the vast number of locations where QI is required for rural areas in Ghana, it is important to have a very focused use of resources. For example, since Techiman district harbours the largest market for maize, this district or the capital of the Brong-Ahafo region, Sunyani, would be good locations for QI service providers to set up their laboratory capacity. Similarly, each commodity has its main hubs where QI should be offered. Such “rural QI hubs” could also serve to influence good agricultural practices of smallholders. Concretely, the Ghanaian Ministry of Food and Agriculture and the districts’ agriculture departments could learn from a specifically built up quality infrastructure expertise and capacity in the regions and help to share the expertise accordingly.

In addition, producer and legally driven approaches should be combined with consumer-driven approaches. Governmental pressure for improved food safety needs to be complemented by more private initiatives to gain sufficient momentum for consumer protection. This should lead to higher quality demands of customers and subsequent QI use, thus ensuring a higher quality of agricultural products.

The study was conducted at the Centre for Rural Development (SLE) at Humboldt University of Berlin on behalf of the National Metrology Institute of Germany (PTB). The PTB has been operating in Ghana since 2007. In the context of technical co-operation with developing and emerging countries, the PTB is working on an improvement of National Quality Infrastructure – the institutional framework that establishes and implements the practice of standardisation, including conformity assessment services, testing, metrology, certification, and accreditation, thus guaranteeing quality assurance and consumer protection.