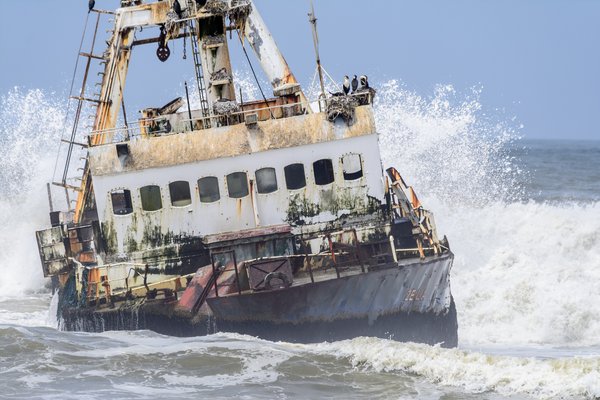 Overfishing, marine pollution and disputes over islands are turning oceans and seas into political issues. Unlike terrestrial areas, the seas are only assigned to individual nations as Exclusive Economic Zones (EEZs) up to a limit of 200 miles. Beyond this boundary, maritime freedom prevails, although it is supposed to be “regulated somehow” in the context of Agenda 2030 and the Paris Climate Agreement. The process towards an internationally sustainable use of the seas continues.

There is much talk of the sea. More than half of all edible fish comes from aquacultures now that marine stocks are overfished. But will it really be possible to cover the rising demand for important proteins with fish? Endless amounts of fertiliser end up in the sea via the rivers, and they have created regular “death zones” in which only algae thrive. In the Pacific, 1,000 to 2,500 grams of plastic waste per square metre are circling in a gigantic gyre known as the Pacific Trash Vortex, and mining corporations are vying for the mineral resources that the ocean bed holds.

Oceans and seas are the last refuges not to be covered by any “true treaties”. Any coastal country can claim an exclusive right of usufruct in the 12-nautical-mile zone, and in the adjacent Exclusive Economic Zone (EEZ), which stretches to 200 nautical miles away from its coastline, it still enjoys limited sovereign rights and may hold sole responsibility for fisheries. Everything that lies beyond this boundary belongs to the public as a whole – together with the above-mentioned problems for which no-one now wishes to be responsible.

At least there is the 1982 United Nations Convention on the Law of the Sea (UNCLOS). However, according to Guido Genrich of Germany’s Foreign Office, it is not shared by all nations. At the Marine Congress held by Forum Environment and Development in Berlin, Germany, last December, Genrich explained that so far, countries had agreed on regulations governing maritime shipping via the United Nations International Maritime Organization (IMO). Ninety per cent of goods traded world-wide are carried by ship. The 1973 International Convention for the Prevention of Pollution from Ships (MARPOL) is still in force, too.

However, no regulations address sustainability in terms of its significance for the high seas. In the individual countries, this is usually due to the way responsibilities for the oceans are shared. Fisheries are either dealt with in an individual department or they are allocated to the ministry of agriculture, while maritime shipping belongs to the ministry of transport, environmental issues are up to the environment ministry, and the foreign office settles foreign policy issues.

Germany’s Federal Ministry for Economic Cooperation and Development (BMZ) has compiled its own ten-item plan of action summarising the responsibilities of all German ministries in the field of marine conservation. In addition, the BMZ Blue Action Fund, which exclusively benefits international non-governmental organisations and is supported neither by “Kreditanstalt für Wiederaufbau” (KfW – Germany’s development bank) nor by private investments. The BMZ’s initial 24 million euros for the Fund was promptly followed by the Swedish Government’s pledge to provide a further twelve million. The first call for project proposals has just closed.

Oceans and seas at the international agenda

However, the topic of oceans and seas has not only gained significance at national level. The common frame for activities is provided by Agenda 2030 and the Paris climate goals, in which the sea plays a wide range of roles for food, value chains, biodiversity and combating global warming. For example, the sea absorbs around 93 per cent of anthropogenic warming, thus damping temperature increases. For the first time, an international conference was held in New York, USA, in 2017 that exclusively dealt with a single Sustainability Goal: SDG 14 and reference it makes to the conservation and sustainable use of the seas. With its recent “Our Ocean” conference, the European Union placed the topic right at the top of the agenda.

EU fisheries policy regarding its own waters is guided by the sustainability recommendations of the United Nations Food and Agriculture Organization (FAO), sets national fishing quota and issues yellow or red cards to trade partners in a warning system if they do not do enough to curb illegal fishing and show weaknesses in their control regime. Here, Bruno Hoffstadt of the German Federal Ministry of Food and Agriculture sees the EU in a pioneering role world-wide.

Things are slowly moving. On the 5th December 2017, a set of regulations was submitted to the UN, the first of its kind to correspond to modern marine conservation. The regulations would provide for a clear designation of marine conservation areas, seek to have environmental compatibility assessments required for deep-sea mineral extraction and demand legal security in the use of maritime genetic resources.

The EU is negotiating as a political entity, and according to Guido Genrich, it has met with a mainly positive response among the Group of 77,which mostly comprises developing countries. However, there is still a long way to go before a new UN agreement has been reached. Russia in particular objects to interventions in its fisheries. Japan, South Korea, China and Iceland are sceptical, too. The alternative does not bode well. Individual efforts are being made to extend the EEZ to the high seas, which would spell the end of “maritime freedom”.