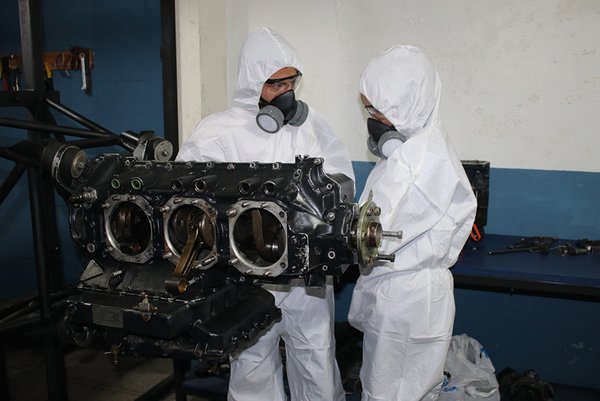 Youth gangs are a widespread phenomenon in Latin America. Often, it is poor prospects for income generation because of insufficient education and work experience that drive young people into the hands of these gangs. International co-operation projects can help by facilitating the acquisition of skills and initiating alliances with local key actors, as the example of a Plan International project in El Salvador shows.

El Salvador is the smallest country in Central America, having only 6.8 million inhabitants, 30 per cent of whom are adolescents and young adults (between 15 and 29 years of age). One of the biggest problems youth face is the high rate of unemployment (15 %), with an even higher rate of underemployment (35.7 %; Plan International El Salvador, 2016). The situation is worse in rural areas, where the poverty rate is currently 38.8 per cent, compared to 32.7 per cent in urban areas. A 2014 study shows that reasons for the high unemployment rate among adolescents and young Salvadorians include lacking education (22 %), lacking work experience (21.2 %) and the low hiring age (12.3 %; Oficina Internacional del Trabajo, 2014). The rates for a low educational level are higher in the rural areas. Only 27.7 per cent of youth in rural areas are in secondary education, compared to 45.3 per cent in urban areas (Plan International El Salvador, 2016). This is mainly due to a concentration of educational institutions in urban areas. Gender is another important variable, as women face more obstacles to entering the job market than men. Only 40.6 per cent of the economically active population are women (Ministerio de la Economía, 2015).

Young people finding themselves in an economically unstable situation need to look for other means to cover their basic needs. One mitigation strategy is migration, as the net migration rate of 6.6/1,000 inhabitants suggests (IOM, 2016). Another strategy appears to be integration in youth gangs, as 71.3 per cent of the youth gang members in El Salvador had a monthly family income of less than 250 US dollars when entering a gang (FUNDE y la Universidad de Florida, 2016). The youth gangs generate income by trafficking of drugs, arms and humans, prostitution, theft, blackmailing and collecting duties.

The root dynamic behind youth gangs and the state response

The phenomenon of large-scale illegal activities among youth gangs in El Salvador is a relatively new one. Whereas youth gangs have existed in El Salvador since the 1950s, their organisation and activities have experienced deep changes. In the 1980s, prompted by the civil war in their country, El Salvadorians fled to the USA, where they were confronted with US-American youth gangs. Some of them joined these gangs or founded youth gangs themselves, for their own protection and to generate income. Integration in the formal job market in the US was difficult as most of the immigrants had only limited educational backgrounds and asylum applications were often rejected, resulting in many Salvadorians staying on illegally.

In 1992, the US started to deport Salvadorians who were charged with accusations. Back in El Salvador, these individuals, most of them men, carried on with their illegal activities and transformed the already existing local youth gang structures. It is important to point out that the economically unstable situation is not the only motivation of young people to join youth gangs, which also serve as a substitute for shaken family structures, as the country and many families are affected by migration patterns (Warnecke, 2013). Traditionally, the state saw the youth gangs as a threat to national security, the answers to this approach being “mano dura” policies (Iron Fist Policies) including repression, more power for the military and changes in the penal code (Holland, 2013). Nowadays, the Salvadorian state has recognised the role of the high unemployment and underemployment rate as the root cause of many social challenges that the country faces. In 2015, the Plan “Safe El Salvador” was passed, which emphasised the need to reduce youth unemployment with the aim to integrate 250,000 youths in the job market, 30 per cent of whom are female. The state, private enterprises and international co-operation are identified as the responsible partners for this action.

Besides unemployment, adolescents in El Salvador are confronted with a high rate of violence and security problems. Youth gangs are present in rural and urban areas, and 75 per cent of their members are younger than 30 years (FUNDE y la Universidad de Florida, 2016). The average age of joining a youth gang is twelve years, but cases are known of members being just seven years old. Although 90 per cent are male, there is a tendency towards increasing female membership in youth gangs. At the same time, adolescents are the main victims of social violence. In 2016, 500 women were murdered, 41.4 per cent of whom were between 15 and 29 years of age (Ormusa, 2016). Neither the unemployment, nor the youth gangs, nor homicide in El Salvador are unique phenomena, but the scale and dynamics they cause are.

Plan International supports the El Salvadorian state in its efforts. Since 2011, the organisation has been implementing the Youth Economic Empowerment Program. In 2016, as part of the Program, it started the project “Youth, Employability and Opportunities” in the districts of San Salvador, La Libertad, Sonsonate und Chalatenango with the support of the German Federal Ministry for Economic Cooperation and Development. The project has two main aims. The first one is the integration of 900 youths at risk, 60 per cent of whom are female, by providing them with education and training opportunities to find a job or to start their own small business. The second objective is to create strategic alliances with key actors in order to transform local structures to become more favourable for youth employment.

The project has been really successful right from its inception. A market scan allowed some more insights into the needs of the employers and helped to involve local enterprises in the project. Up to now, 39 firms have supported it by providing internship possibilities to the project participants or other means. More than 372 youths have completed life skills training to strengthen their soft skills, and 175 of them have already completed their education and training in the areas of tourism, merchandise or airplane cleaning. Co-operation with the local aircraft training centre shows the great support and synergies that the project is achieving with local partners and the importance of thinking outside the box. The case of twenty-two-year-old José illustrates this. Owing to financial difficulties, José could not finish high school and started to work in a shoe shop to help his mother cover the basic costs. But this did not offer any perspective to advance to a position with better working conditions, especially since the youth gangs were controlling some areas close by, limiting his possibilities to visit education centres. As he has now successfully completed his airplane cleaning course, he is more confident and has better prospects of entering the formal job market.

Other curriculums are being developed in order to respond better to market demands, for example for warehousemen and filling-station attendants. All in all, 97 of the trained youths have already found regular work thanks to the project. Besides supporting youth education and training, the scheme has resulted in 37 youths already identifying ideas for their own businesses, most of them in the area of agriculture and crafts. The next step will be a competition where they can present their ideas in order to win a small grant to start their own business. All the youths are accompanied by a psychologist during the duration of the project, so that problems can be worked on before they even exist. The local government is supporting the project by helping to organise get-togethers with representatives of local firms and job ferries. These close interactions between government and private firms will help to create sustainable structures which can last a lot longer than the project period of three and a half years and therefore benefit even more youths in the future.

Towards a more stable society

This example shows that civil society can play an active role in the creation of job opportunities for young people and complement state efforts. In this manner, the youth in El Salvador have possibilities to generate income in legal ways in their home country, resulting in less motivation to become a youth gang member or to emigrate. And in the end, more youths with stable income do not only benefit themselves and their family but strengthen society as a whole.

Plan International is an international non-governmental organisation which works in more than 70 countries. It focuses on the promotion of children rights by using a community-centred approach. The main impact areas include Education, Protection, Youth Economic Empowerment, Participation, Sexual and Reproductive Rights and Early Childhood Care and Development. The new strategy “100 Million Reasons” focuses especially on the rights of girls. More information: https://plan-international.org