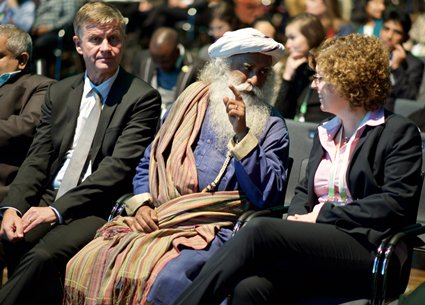 Around one thousand people got together at the Global Landscapes Forum in Bonn, Germany, to discuss topics surrounding the restoration and sustainable use of landscapes last December.

Eighty per cent of deforestation world-wide is linked to agriculture, which is also responsible for 30 per cent of greenhouse gas emissions world-wide. The landscape approach seeks to tackle forestry and agriculture issues together to achieve sustainable solutions for the use of landscapes that benefit everyone living in them. The Center for International Forestry Research (CIFOR) has described ten principles characterising the landscape approach and addressing aspects ranging from continual learning and adaptive management through rights and responsibilities of different actors to resilience to strengthening stakeholder capacity. The approach has been adopted by many organisations and institutions, and several of them were represented at the Global Landscapes Forum in Bonn, Germany, in late December. The event comprised plenary sessions and numerous workshops focusing on individual topics as well as a wide range of side events.

Opening the Forum, CIFOR Director-General Robert Nasi pointed out that it offered a good opportunity to discuss the landscape approach in contexts such as climate change and sustainable development. Reminding the meeting that 60 per cent of the global population were living in coastal areas, Nasi stressed that while focusing mainly on agriculture and forestry, the approach was also important in discussing seascapes. “The landscape approach looks at the whole picture,” he concluded. “It is a concept to solve problems created by humanity itself.”

One of these problems is the world-wide threat to biodiversity. In Africa, biodiversity is declining at twice the average global rate. Ameenha Gurib Fakim, President of the Republic of Mauritius, told the meeting that the island in the Indian Pacific had lost almost 100 species since the arrival of the first humans. “This represents an obligation to build a bridge between biodiversity and research,” remarked Fakim, herself a biodiversity scientist. “Science is an investment in the future. Basic research will help develop a sustainable economy and boost innovation. There will be less disease, a better environment and more economic growth.” She stressed the link between hunger and biodiversity, issues that needed to be addressed together. The potential of agrobiodiversity management and sustainable diets had to be explored.

However, Fakim also noted Africa accounted for a mere two per cent of global research investment. “This dilutes the ability to address issues like drought, which reduces harvest yields,” she said. “And access to water is the biggest single cause of conflict.” Progress in implementing the Aichi Convention on biodiversity had been mixed in Africa, which was still lacking in necessary information and financial resources. Nevertheless, 80 per cent of the continent’s countries had enhanced their efforts e.g. in establishing designated areas.

Fakim highlighted the significance of women in maintaining biodiversity, a role that she traced back to ancient hunter-gatherer societies. Women had always largely held responsibility for nurturing biodiversity, accumulating an intellectual property that warranted their empowerment as stewards in this area. The United Nations Environmental Programme (UNEP) had referred to biodiversity as a cornerstone of their livelihoods.

UNEP Executive Director Eric Solheim drew attention to some of the positive developments regarding the environment in 2017, among them the “Powering Past Coal” alliance aimed at phasing out coal and launched by Canada and the UK at the COP23 summit in Bonn. “China is now talking more about the environment than the economy,” Solheim maintained. Progress was also being made in India, with landscapes clearly at the centre of changes in many areas. Botswana, where people were protecting biodiversity and developing a vibrant ecotourism industry, provided a good example of linking job creation with taking care of landscapes. While acknowledging the importance of business and job creation in greening the economy, Solheim also emphasised reaching out to faith communities. “All world religions say that Mother Earth has to be protected,” Solheim remarked. “And Mahatma Ghandi stated that we must do what we can in this respect.”

The dark side of the Green Revolution

Later on in the meeting, Solheim spoke to Sadhguru, founder of the Isha Foundation, a non-profit service organisation supported by over nine million volunteers in more than 250 centres world-wide. Sadhguru said that the total length of rivers in his home country of India had been halved in a matter of 25 years. Many rivers were now just seasonal, and a number of them no longer reached the sea. Most of India’s rivers are forest-fed, and since rain only falls 45 days a year on average, they have to rely on substantial vegetation to store the water. However, according to Sadhguru, in the course of the Green Revolution, vast amounts of trees have been removed over the past 35-40 years. The same amount of water is coming down, but most of it is not stored. The UN predicted in 1998 that 60 per cent of India would be desertified by 2025. To address this problem, Sadghuru initiated tree-planting campaigns in some of the affected areas that were soon enjoying the support of around 35,000 schools, with trees being adopted as “pets”. In all, 35,000 trees were planted. “But this is not enough,” Sadhguru warned. “Depletion of forest cover has been worst over the last seven years. If it is not halted, most rivers will be seasonal in 25 years’ time.”

According to Sadhguru, more and more people are planting trees in India today. Organisations are eager to break tree-planting records, and around 160,000 schools have taken part in planting competitions. Focusing on the actual needs of people was key in these campaigns, Sadhguru noted. However, gaining the support of the government, and in particular the Ministry of Economics, was equally important. “If people are forbidden to cut trees on their land, nobody will grow them,” he explained. “The more wood is used, the better. Unlike iron ore or minerals, it just grows back.” Sadhguru also pointed out the role of trees in shifting back from rice-growing to horticulture along rivers, which would encourage people, especially children, to revert to their former high fruit diet.

The economics of restoration

Karin Kemper, Senior Director for the Environment and Natural Resources Global Practice at the World Bank, looked at the more general aspects of the “economics of restoration”. Landscape restoration had the potential to end extreme poverty and also to boost shared prosperity. “Landscape degradation has a big price tag, whereas the gains generated by restoring landscapes are huge,” Kemper noted. Kemper emphasised that with global demand for timber and other forest products growing and that interest in forest management increasing, prospects were good for sustainable forest products and also for creating millions of jobs supporting green growth. In Ghana, for example, landscape restoration had led to an eightfold increase in yield. Innovation, information and incentives were crucial to accelerating landscape restoration. More research efforts and technologies were required, as well as new models to combine public and private finance.

According to the International Panel on Climate Change (IPCC), Central America is among the world’s regions that are most vulnerable to climate change. And a recent UN report states that El Salvador is in turn the most vulnerable country in this region. Moreover, it is one of the most deforested countries in Latin America, with just five per cent of its original forest cover left. Lina Pohl, El Salvador’s Minister of the Environment and Natural Resources, explained in Bonn that the region was suffering both from severe rainfall and droughts. The rainy season had shifted from May to October to June to November, and several insect species were appearing a month later. The weather changes were having a severe impact on hydropower, infrastructure and agriculture, especially for coffee producers. And forest fires were braking out more and more often.

To address the severe deterioration of ecosystems and the loss of key ecosystem services, the government introduced the National Landscape and Ecosystem Restoration Program in 2012. Gathering information on the country’s ecological situation was among the first steps taken. Maps were drawn showing priorities for restoration and taking food security into account. Various climate information systems were established. The Program aims at creating resilient territories and simultaneously raise productivity. One of its core elements is a “Coffee Agreement” under which coffee producers work together with the government in restoring and maintaining coffee agroforestry systems. Benefits include enhanced freshwater supplies and the prevention of landslides. Indigenous communities working together with the Program provide traditional knowledge to develop solutions and have a say in decisions. A National Council for Sustainability has been set up comprising the government, NGOs, churches, business representatives and several other stakeholders. However, the country continues to face huge problems, not least that of acquiring international funding to adapt to climate change as Pohl pointed out in Bonn. “We have to restore 50 per cent of the country by 2030, otherwise we just won’t survive,” she concluded.

Winding up the meeting, Robert Nasri announced that nearly a thousand people had come to Bonn, representing 103 countries and more than 80 organisations in all. Around 51,000 people had followed the presentations and discussions via livestream, and more than 21 million people were reached through the Social Media. The event marked the Global Landscapes Forum being turned into a year-round platform for governments, researchers, NGOs, civil society and the private sector. Bonn is now host city for the Forum secretariat and annual conference events.