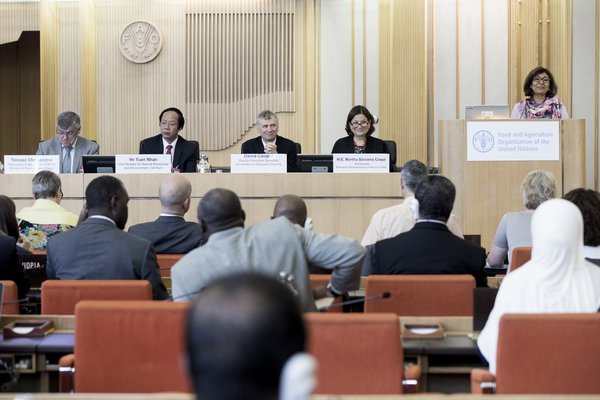 The Dialogue brought together stakeholders from governments, research, intergovernmental and nongovernmental organisations and the private sector.
Photo: ©FAO/Alessandra Benedetti

The Food and Agriculture Organization of the United Nations hosted the first Multi-stakeholder Dialogue on Biodiversity Mainstreaming across Agricultural Sectors. Stakeholders discussed concrete areas of joint action for the conservation and sustainable use of biodiversity.

Biodiversity and the ecosystem services it provides are essential for humanity, particularly in the face of emerging challenges such as a growing population with changing dietary demands, rapid urbanisation and the impacts of climate change. Biodiversity is essential for safeguarding global food security and nutrition, for improving rural livelihoods and for enhancing the resilience of people and communities. However, we see a steady loss of biodiversity and forest cover and a degradation of soils, water and air quality.

A systemic approach with the Rio conventions

To reinforce its work and to promote discussion and sustainable use of biodiversity in agriculture, fisheries and forestry, FAO launched a Biodiversity Mainstreaming Platform in 2017. As one of its first activities, the Multi-Stakeholder Dialogue on Biodiversity Mainstreaming across Agricultural Sectors, jointly organised with the Convention on Biological Diversity (CBD), took place at the FAO Headquarters in Rome/Italy end of May 2018. It brought together stakeholders from governments, research, intergovernmental and nongovernmental organisations and the private sector to discuss current biodiversity mainstreaming efforts and the way forward. The informal character of the Dialogue allowed for engaged and rich debates, demonstrating the willingness of the different stakeholders to understand each other’s point of view.

The dialogue resulted in a widespread agreement with FAO’s offer to act as a Biodiversity Mainstreaming Platform. This will allow for important contributions to the mainstreaming of biodiversity in the framework of the 2030 Agenda for Sustainable Development and for raising the voice of agricultural sectors. Participants emphasised that the Platform should reinforce synergies and explore a systemic approach with the Rio conventions, and that the dialogue’s outcomes should be reported to the CBD Conference of Parties (COP) 14 in Egypt later this year. Hope was expressed that the CBD COP 15 in China (in 2020) would become the ‘Paris of Biodiversity’, stressing the linkages between biodiversity loss and climate change and the risks associated with inaction.

Participants recommended that FAO, acting as the Platform, could take action on three broad fronts:

Firstly, at the international level, by engaging with partners to improve global governance. Participants suggested that the Platform could foster the development of integrated cross-sectoral approaches for mainstreaming biodiversity and contribute to the CBD’s Post-2020 Global Biodiversity Framework towards the 2050 Vision for Biodiversity.

Secondly, at the national level, through support to government agencies, agricultural producers, and other food systems actors. It was proposed that the Platform could assist countries in the development and implementation of national biodiversity mainstreaming strategies. National policy initiatives, governance mechanisms and regulatory approaches that effectively mainstream the conservation and sustainable use of biodiversity could be monitored and best practices shared.

Thirdly, in the marketplace, by exploring ways to incentivise investment in biodiversity. Participants recognised that the Platform could contribute to the improvement of incentive schemes and of methods for valuing biodiversity and ecosystem services in national accounts.

At all levels, the development of metrics and indicators was considered as an important tool for measuring the impact and performance of sustainable use and conservation of biodiversity in agriculture, fishery and forestry. Knowledge was stressed as a critical driver of change.

Therefore, FAO was tasked with using its Platform to facilitate sharing of information. It was suggested to promote learning among all stakeholders on how to include sustainable use and conservation of biodiversity into the management of agricultural ecosystems. In this regard, the value of local and indigenous knowledge was highlighted.

When closing the Dialogue, FAO’s Director General José Graziano da Silva announced that FAO would consider developing a Biodiversity Strategy in close consultation with its partners and stakeholders.

The views expressed in this publication are those of the authors and do not necessarily reflect the views or policies of the Food and Agriculture Organization of the United Nations.

© Food and Agriculture Organization of the United Nations