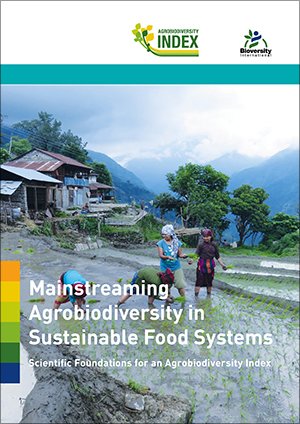 Overreliance on too few varieties and species is leaving the food system unnecessarily exposed to shocks and stresses, this study warns. Moreover, it is neglecting a high-impact solution to major health, environmental and food security challenges.

A scientific analysis of how agrobiodiversity can make our vulnerable food system more resilient, sustainable and nutritious was published by Bioversity International in September 2017.

According to the guide, entitled Mainstreaming Agrobiodiversity in Sustainable Food Systems, investments in agrobiodiversity play a critical yet overlooked role in tackling wider global targets such as reducing poverty and malnutrition, reversing environmental degradation and combatting climate change.

Of the estimated 7,000 edible plant species, just 30 are used to feed the world. Tens of thousands of alternatives exist that can grow in difficult environments, have high nutrient content and have potential to increase their yields. However, almost 80 percent of land areas dedicated to cereals only grow wheat, maize and rice.

The guide details a range of affordable, nutrient-rich foods that can alleviate the burden of malnutrition affecting two billion people, such as the vitamin A-rich To’o banana and the darkina fish, which is high in iron and calcium.

It highlights the potential for heat- and drought-tolerant traits to be found in traditional crop varieties, at a time when climate change is expected to reduce the yield of major crops like wheat by six percent with each degree Celsius increase.

Furthermore, it argues that biodiversity-based practices such as intercropping trees with vegetables and rotating crops can significantly boost carbon and nitrogen content in the soil, to replenish the 33 percent of the world’s farmland that is degraded.

For a full copy of the book visit: Mainstreaming Agrobiodiversity in Sustainable Food Systems