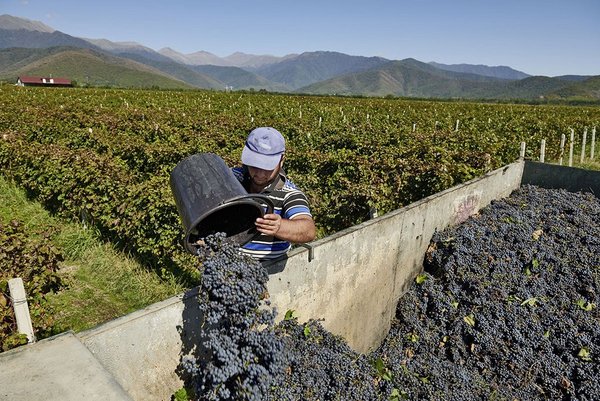 Lots of water for intensive cropping

The Kakheti region is one of the oldest wine-growing regions in the world. But it is not just fine wines that are produced here: walnuts, apricots and other fruits also flourish in the fertile valleys to the south of the Caucasus. The intensive cropping in the area is based on an abundance of water that is skilfully managed by state institutions. What is still lacking, though, is a supranational water management arrangement with neighbouring Azerbaijan.

Baise la Police” is the slogan in bold letters on the wide T-shirt that drapes in folds over the chest and bulging stomach of Sacharia Gorgishveli. The good-humoured 60-year-old becomes animated when he talks of his new wine store that is still under construction. “Yes, what do you think we did during Gorbachev’s prohibition of alcohol in the 1980s?” he asks rhetorically. “Of course we made and drank wine and schnapps and sold some of it too.” He grins and refers to his family’s long wine-growing tradition, which goes back to well before the Soviet era. “At our house, several underground qvevri were installed back in 1892. The Soviet authorities knew nothing about them and so we were able to make our wine in the earthenware vessels without being detected. Now we have dug up our old wine vessels at the family property and we are replacing them in the ground here at the new wine store,” says Gorgishveli as he talks enthusiastically of his activities.

“Here we plan to create a small showroom for guests and tourists who want to sample our wines,” adds his son Valeri. His business studies in Chicago have left their traces. “I am very busy,” he says more than once, in English. “Alongside the wine production, I also want to start growing blueberries. I get the plant material from Michigan and then clone it in my own laboratory in Akhasheni,” he explains. Could we perhaps take a closer look at the lab? “No, I’m afraid that’s not possible,” replies the young Georgian warmly but firmly as he takes his leave.

Like the Gorgishveli father and son, many Georgians are currently investing in Kakheti, one of the oldest wine-growing region in the world. The eastern region of Georgia does indeed provide excellent conditions for agricultural activities thanks to a favourable climate, good soil and adequate water from the mountains of the North Caucasus. Word of this has now spread far beyond the Georgian border and has drawn foreign investors from Europe, China and India to the fertile Alazani Valley. Wine-growing is not the only attraction, but it is the main one. In the three decades since the collapse of the Soviet Union it has undergone a tough transformation from mass production to an emphasis on quality. The process has been very difficult – not least because in 2008 Russia suddenly imposed an import ban on Georgian wine. The Russian boycott, which was maintained until 2013, was disastrous for many large Kakhetian wine-growers; a number went to the wall.

From mass production to quality

Despite this, Hilarius Pütz is of the view that some good came of the boycott. “Up until then, the mainstream philosophy in the wine industry still involved focusing totally on industrial mass production, Soviet style,” explains Pütz, a German wine expert who has been living in Georgia for 13 years. We are in the tasting room of the Avtandil Bedanashvili family vineyard in Kardenakhi, which he helped establish. “But when the Russians stopped buying this mass-produced product, the Georgian wine sector was forced to come up with strategies for finding new customers and new markets.” Pütz says that in the last decade many vintners and wineries in Kakheti and Georgia’s other wine-growing regions have – voluntarily or of necessity – invested in quality, and new wineries are springing up everywhere. Despite this, he points out, harvesting logistics are stuck at Soviet level. A large number of old Russian trucks such as the well-known ZIL-130 are still being used during the grape harvest. The grapes are tipped loose into the truck bed until it is full to the brim; the trucks then queue, sometimes for hours, because the grape reception point cannot cope. “That’s not good,” criticises Pütz.

The trucks are not the only reminder of the Soviet era: the storage and irrigation system in Kakheti also dates from state socialist times. The dam in Duisi on the region’s western edge was built in 1971. It holds back the water of the Alazani before the river flows into the valley of the same name. From here, the crystal-clear mountain water is fed into a concrete canal. At the end of September, after a long, dry summer, only a trickle flows in the natural stony bed of the Alazani. “About two-thirds of the stored water then flows into the canal system,” explains Soso Gigolashvili, an official from the state water and soil authority in Duisi. “When the snow starts melting in spring, then we have a huge volume of water,” adds Gigolashvili; he mentions the ten-megawatt hydropower plant in Akhmeta that is fed by canal water. The importance of an adequate water supply – for agriculture generally but in particular for the fruit plantations, nut trees and special crops – is emphasised by Governor Irakli Kadagishvili in Telavi, the provincial capital. “To grow apricots, peaches, hazelnuts, walnuts and also grapes and other special crops, the rainfall is not enough; additional water is needed, and we can guarantee that with the state irrigation system,” says Kadagishvili. “And demand is likely to increase further as a result of climate change, which is gradually becoming noticeable here.”

Water is a valuable resource: is its use discussed with the Azerbaijanis? Kadagishvili shakes his head somewhat incredulously. “No, we don’t talk to the Azeris about our water management; we only gear it to the requirements of our own agriculture,” says the governor. But there is considerable doubt over whether this regional or at most national approach can be maintained in the same way in future. From the perspective of Christian Georgia, the Islamic world seems further away than the country’s northern neighbour Russia, but the geographic reality is quite different. To the east of Kakheti is the border with Azerbaijan, which the Alazani River crosses. If intensive agriculture in Georgia claims almost all the water in the upper reaches of the river for itself, then very little remains for farmers in Azerbaijan. If climate change in this region leads to summers becoming even drier and hotter and there is still no supranational water management system, distribution conflicts are almost certain to occur.

The various political upheavals in the whole Caucasian region from Syria to Russia are already closely interlinked; this is illustrated by the situation in the area above the dam in the Pankisi Gorge. In the past, Chechens who had fled from Russia sought refuge there in the woods and mountains. It is rumoured that Isis scouts have been recruiting young men from among these Chechen war refugees for the war in Syria, but the facts are hard to pin down. “The police have that under control now,” states water construction manager Soso Gigolashvili at the dam, which has received a fresh coat of blue paint. Hopefully that is the case, because – as in many agricultural regions – crops succeed or fail with the availability of water. If – in line with the long-term goals of Governor Irakli Kadagishvili – the blue gold in Kakheti continues to flow peacefully, if Georgian agriculture and wine-making continue their greening process and if more use is made of solar energy than is currently the case, then the region need have no fear of the future. Indeed, many young people like Valeri Gorgishveli will then return to contribute to the development of their fertile and sun-drenched homeland.

The Kakheti region stretches eastwards from the Georgian capital Tbilisi to the border with Azerbaijan, with a population of 312,000. The provincial capital is Telavi. Archaeologists believe that people were growing grapes and drinking wine in Kakheti more than 7,000 years ago. The tradition continues to this day through the “qvevri” (clay amphorae), which are usually buried in the ground so that the wine can ferment at an almost constant temperature. In addition, burying the amphorae ensures that virtually no oxygen enters the wine through the vessels’ clay pores. The only oxygenation is through micro-oxidation, which is important for the maturation of the wine. The qvevri are filled with the grapes, including skins and seeds, and fermentation then takes place, followed by storage on the skins for four or five months. This releases additional tannins and polyphenols, making the wine very full-bodied.

In the second half of the 19th century, vineyards covered some 71,200 hectares of Georgia. As a result of fungal diseases (powdery and false mildew) and pests (e.g. phylloxera) imported from North America, this had shrunk to around 37,400 hectares at the start of the 20th century. To restore the destroyed vineyards, American phylloxera-resistant rootstocks were imported in Georgia, as they were in the rest of Europe. There was a strong market for Georgian wine during the Soviet period. An era of mass production began and by 1985 Georgia’s vineyards had expanded to cover some 128,000 hectares. After the collapse of the Soviet Union, this figure shrank. Moreover, the industry suffered a severe setback as a result of the ban on imports of Georgian wine imposed by Russia in 2008. In the meantime, however, it is estimated that the vineyard area has recovered to considerably more than 50,000 hectares.

Dierk Jensen is a freelance journalist based in Hamburg, Germany.
Contact: dierk.jensen@gmx.de