There is still an urgent need for a large number of countries to engage in land governance reforms
Photo: AFROTO/ WRI

Without doubt, the Voluntary Guidelines on the Responsible Governance of Tenure (VGGT) have promoted development and uptake of global and regional land policy frameworks and guidelines. But what about implementation on the ground? In order to assess this, the Land Matrix Initiative has examined large-scale land acquisitions and investments in 23 African countries – and arrived at a sobering result.

Demand for land and natural resources has significantly accelerated in the last decade, and this trend is likely to continue, leading to a surge in large-scale land acquisitions (LSLAs) – a phenomenon which has been dubbed the “rush for land”. But decision-making processes over land and natural resources often lack transparency, which, together with weak and deficient governance, commonly create conditions which negatively impact local stakeholders. This state of affairs was to change with the adoption of the Voluntary Guidelines on the Responsible Governance of Tenure of Land, Fisheries and Forests in the Context of National Food Security (VGGT) in 2012.

The guidelines are intended “to serve as a reference and to provide guidance to improve the governance of tenure of land, fisheries and forests with the overarching goal of achieving food security for all and to support the progressive realisation of the right to adequate food in the context of national food security”. The Land Matrix Initiative (see Box at the end of article) recently assessed the compliance of large-scale land acquisitions and investments with the VGGT in Africa.

While acknowledging the progress made in terms of investment guidelines and land policy reforms at national and global levels over the last ten years, the findings of this assessment reveal staggeringly low VGGT compliance – an indication of the lack of change in land governance practice by foreign as well as domestic investors – across the African continent. In Africa, for example, 78 per cent of all LSLA deals assessed show unsatisfactory levels of VGGT uptake and implementation, and 20 per cent do not comply with any of the VGGT principles at all. Likewise, when LSLA deals are aggregated at country level, 87 per cent of countries assessed present unsatisfactory results regarding VGGT implementation. 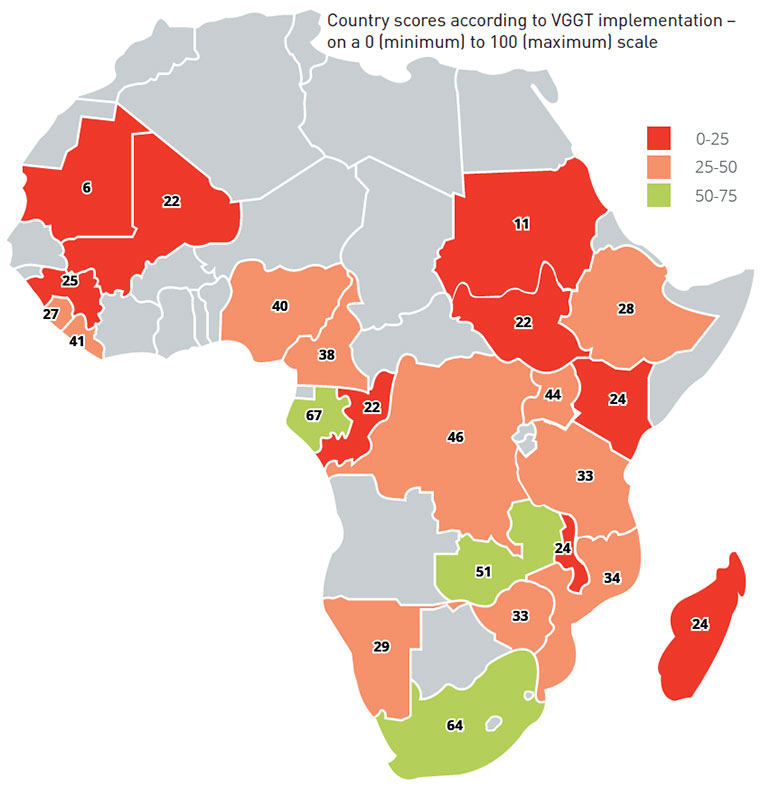 The VGGTs include 25 chapters, each composed of several articles, ranging from legal recognition of tenure rights to the administration of tenure. Taking a deeper dive into the thematic areas represented by the chapters (also see Box), results show, at a continental level, that overall land deals in Africa are the least performing with regard to i) consultative processes, ii) respect of national law and legislation, including investment and land legislation, and iii) respect of legitimate tenure rights, including informal tenure (chapter 10) of local communities and Indigenous Peoples.

Against this backdrop, measures to respect human rights and provision of impartial and competent judicial and administrative bodies, which include timely, affordable and effective means of resolving disputes over tenure rights (as well as alternative means of resolving such disputes), remain limited. This is also the case for aspects related to safeguards, unlawful expropriation and application of agreed-upon compensation measures. One transversal challenge to this assessment is access to information on land overall and on land deals in particular. Although the results of the evaluation show relatively positive results with regard to the improvement of publically available information and data concerning land transactions (in certain countries, for example Liberia and Sierra Leone), sectors (forestry) or through particular initiatives (OpenLandContracts, Land Matrix), LSLAs remain characterised by a continuous lack of information. 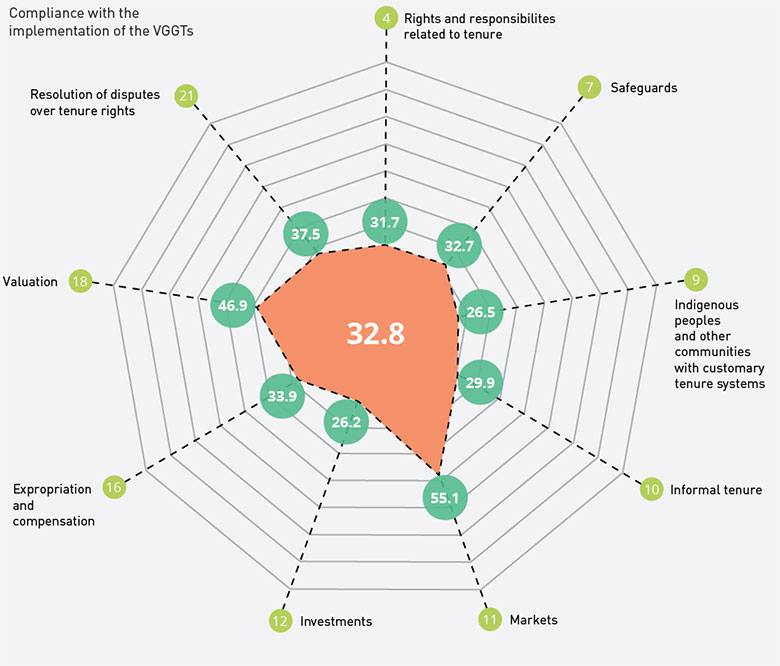 There is still a long way to go by governments and, more particularly, by investors to make contracts public and transparent. Based on the data used for the monitoring presented in this report, only few deals and countries have extensive information for the aspects covered by the VGGT principles with regard to land investment. Just one country (Liberia) has data for about 30 per cent of the variables covered in this VGGT monitoring exercise; most countries cover between 5 and 20 per cent. This gives a concrete picture of the lack of data and dire state of transparency in terms of information surrounding LSLAs – one of the primordial guidelines of responsible investments in general and the VGGTs in particular (chapter 12 of the VGGTs). It also exposes the factualness of the results we are presenting, and of LSLA overall, which will remain incomplete as long as transparency does not improve.

These results are all the more alarming since governments and private funders of the countries from which numerous of these investors originate just pledged 1.7 billion US dollars at the COP 26 in Glasgow in the UK, in support of Indigenous Peoples and local communities’ role in preventing deforestation that fuels climate change. These global pledges and policy changes are meaningless if they are not accompanied by compliance mechanisms and do not lead to effective (sustainable and inclusive) transformation on the ground.

The European Commission’s adoption of the long-awaited proposal for a Directive on corporate sustainability due diligence (CSDD), aimed at addressing human rights and environmental abuses in global value chains, is promising. But here again, while the text represents a historic opportunity to enhance protection of affected communities and the planet, as the draft stands, it might fall short of expectations. The compliance-based mechanism, relying on company codes of conduct and contract clauses between companies and suppliers, risks weakening the directive when applied in total darkness. Fast-tracking land reform and imposing more stringent and binding corporate and investor country accountability, both supported by increased transparency and monitoring, are thus indispensable.

Towards more inclusive and sustainable investments in land

Hence, despite the progress made regarding the development of global and regional land policy frameworks and guidelines, and their uptake into policies at national level, land governance practices on the ground have yet to change. This goes beyond questioning and pinpointing the shortcomings of the frameworks and tools deployed to accompany these changes, such as the VGGTs referred to in this article. It is about how to mobilise these relevant global frameworks, guidelines, and references in view of achieving effective change overall, and more responsible land investment and increased accountability in particular. Three indispensable follow-up actions and reforms seem to be needed if effective change in investment practice in land is to be achieved:

Fast-track land reform: Overall, besides some progress as highlighted in the report, the results show that there is still an urgent need for a large number of countries to engage in land governance reforms, and more particularly their effective implementation, aimed at sustainable, equitable, and inclusive land investments. This calls for all countries, and in particular those that ratified the VGGTs as well as other global frameworks, such as the Principles for Responsible Investment in Agriculture and Food Systems (RAIs), to effectively fast-track their implementation as a necessary and prerequisite step.

Corporate and investor country accountability: This needs to be accompanied by corporate accountability measures throughout global value-chains in all investor countries to hold investors (and their suppliers) to account with regard to investments abroad. Legislation will need to be combined with voluntary sustainability standards and go beyond compliance-based approaches, such as company codes of conduct and contract clauses, which could allow parent companies and investors to avoid responsibilities.

Increased transparency and monitoring: All countries should continuously monitor land ownership and control, land transactions and land use change. In particular, all actors engaged in LSLAs must increase transparency around agricultural investment projects. When public institutions and public capital are involved, this should be made compulsory. It applies to investor and recipient countries as part of their commitment to the implementation of the VGGTs and RAIs. This can also be done by providing a mandate to and support for independent transparency and monitoring initiatives, such as the Land Matrix, to ensure that the information can be used by relevant stakeholders and in more inclusive decision-making processes, such as multi-stakeholder platforms, to hold investors and governments to account.

Monitoring of the VGGTs by the Land Matrix

Launched in 2009, the Land Matrix Initiative monitors large-scale land deals involving conversions of land over 200 hectares from either local community use or important ecosystem service provision to large-scale commercial production in the food, biofuel, mining, tourism, timber and carbon-trading sectors. To do so, the Initiative uses official data as well as non-official data such as company reports, contracts, analytical and research reports, press articles, etc. Since 2019, the variables captured have been expanded to incorporate data on conflicts, consultation, involvement of actors etc. – variables that are crucial for the monitoring exercise of global frameworks such as the VGGTs. In this VGGT implementation assessment, 16 Land Matrix variables align with 18 VGGT articles focusing on LSLA. Although mainly covering articles of chapter 12 on investments, they also address issues related to rights and responsibilities regarding tenure (VGGT chapter 4), safeguards (chapter 7), Indigenous peoples and other communities with customary tenure systems (chapter 9), informal tenure (chapter 10), markets (chapter 11), expropriation and compensation (chapter 16), valuation (chapter 18) and resolutions of disputes over tenure (chapter 21) – also see figure.

Ward Anseeuw is a senior researcher at the French Centre for Agricultural Research for Development (CIRAD), seconded to the International Land Coalition (ILC) as Lead for Data, Research and Knowledge. CIRAD and ILC are members of the steering committee and technical team of the Land Matrix.
Jeremy Bourgoin is a human geographer and senior researcher at CIRAD in Montpellier, France.
Angela Harding is the global coordinator at Land Matrix. She is based at the University of Pretoria,  South Africa.
Contact: w.anseeuw(at)landcoalition.org

Food and Agriculture Organization of the United Nations (FAO), (2012). Voluntary Guidelines on the Responsible Governance of Tenure of Land, Fisheries and Forests in the Context of National Food Security.