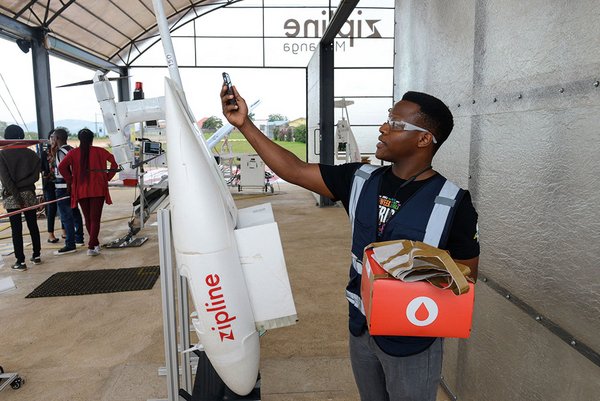 Zipline staff member Michael doing a final check of all data before putting the consignment of blood conserves into the drone’s cargo hold.
Photos: Jörg Böthling

Lifesavers from the air

The prompt arrival of blood and medical supplies can mean the difference between life and death. In regions with difficult access, drones can rapidly cover distances that normally take hours or days. An example from Rwanda.

The signal has just come from the radio tower: the sky is clear. No helicopters, no planes. So, no possibility of a collision. Michel takes a last look at the monitor, then counts down the seconds. Then, with a whirring sound, the drone lifts off skywards. In other countries, such as Afghanistan and Yemen, drones are weapons of war. Here, in Rwanda in East Africa, they bring life rather than death: each of the small aircraft carries two batches of blood over the mountains. “The furthest health centre that we can reach from here is a 45-minute flight away,” says Michel, who has just launched the drone. This young man, in his late twenties, studied pharmacy. He regards what has been possible to do in his home country since 2016, with the aid of Zipline, a start-up from California, as a minor miracle. “It used to take hours or days for the blood to reach the place where it is used,” says Michel. “Now it’s only a matter of minutes.”

An order from another clinic is just being loaded. At Nyamabuye airfield in a suburb of Muhanga, the second largest city in the country, 45 kilometres by road south-west of the capital Kigali, Michel goes into the little storeroom where his colleagues store blood and medicines in floor-to-ceiling fridges. He checks the contents of the package again, loads it into the drone’s belly and places the drone on the ramp. A colleague brings the wings, checks that they are working properly using a mobile phone app and QR code, and then inserts the battery containing the GPS module that determines the drone’s destination. One last glance at the monitor. The drone is ready to take off.

About 30 kilometres away, in the waiting room of Gikonko Health Centre, old men with walking sticks who have walked several kilometres to get here sit next to young men playing with their phones. The centre, run by the German-based Institut St. Bonifatius, was founded in 1974. After the genocide in Rwanda the surgeon and director Uta Düll rebuilt the centre, which had been completely destroyed. She sees about 200 patients per day from a catchment area of 15 kilometres: that is 15 kilometres over hills and mountainous terrain, meaning an arduous journey for most people here.

For the country, which lost around a million people in the genocide, leaving its past behind and finding a way to move forward has been a tour de force. “Unlike other African countries, Rwanda is a country with vision,” says Uta Düll, “but not everyone can keep up with the pace.” Many advances have been made, the surgeon explains, with things that are still woefully inadequate elsewhere: electricity supplies, the will to make schooling accessible to the entire population, the “mutuelle”, i.e. universal health insurance. However, the vision is not being realised everywhere.

“The drone will be here in 30 minutes,” says Dr Düll, glancing at her phone; Zipline has confirmed her request via WhatsApp. The arrival of the drone is a popular sight among the children who play in the health centre grounds. Today Uta Düll gives a ten-year-old boy the job of fetching the package from where it lands. At exactly the time specified there is a whirring sound above, and the little aircraft comes into view. It slows down and circles, then drops the package, which drifts down to earth on a small parachute. The boy races off, picks it up and carries it proudly on his shoulder to the centre’s director.

The package that he is carrying will save the life of a new-born baby. At the health centre Dr Düll has specialised in procedures that are only performed in a few hospitals in Rwanda: for hydrocephalus, also known as water in the brain. Up to 100 of the complex operations are carried out each year at the small clinic. The doctor can only cover the 1,000-euro cost of each operation because a medical technology company from Potsdam in Germany provides her with the costly aids (called shunts) free of charge. In Rwanda up to three out of every thousand children are born with the life-threatening condition.

The chances of a child leading a largely normal life, even after a successful operation, are hard to predict. Uta Düll knows that the families themselves already suffer enormous hardship. That is inasmuch as one can talk about families at all: “Only a third of the expectant mothers who come here are married, while another third are at least in a halfway stable relationship,” she says. Twenty-two-year-old Aldine is in the third group, that is, those young women who come to Gikonko alone to give birth. She cradles her baby son, whom she has named Umuhoza, meaning “comforter”. In a few days, he will undergo an operation for hydrocephalus. “His chances are good,” the doctor says, meaning of getting through the operation. The rest remains to be seen.

In the next bed is a young woman called Albertine, holding her first child, a little girl, in her arms. The baby has come through the procedure successfully, and the two of them can go home in a few days. There is no father to share responsibility for the child in Albertine’s case either. In the foyer of the health centre blankets are spread out on the floor, with every inch occupied by mothers with babies and toddlers. There are also one or two older children, aged between four and six. Their mothers have sent them from the villages, knowing that milk is distributed at Gikonko Health Centre for the youngest children. There is bound to be some left over for the older ones, as no child is likely to be sent away hungry from the centre.

Zipline, a medical product delivery company based in San Francisco, California, has been operating in Rwanda since 2016. Besides the Muhanga site in Southern Province, it has had a base in Kayonza in the east of the country since 2018. Since April 2019 the drone service has also had a distribution centre in Ghana, and there are plans for sites in India and the Philippines.

The start-up’s unmanned aircraft deliver blood supplies, vaccines and medicines to remote regions at speeds of 110 kilometres per hour, and have a maximum range of around 130 kilometres. The health centres send in their orders by text, the messaging service WhatsApp, or online.

The drone is launched by an electric catapult and lands by catching an arresting gear. Information from a 3D satellite map and manual ground surveys is used to calculate and programme the flight routes. According to the company, the cost of delivery via drone is comparable to conventional means by road, especially in the case of emergencies.

Zipline has been approved by the US Federal Aviation Administration for delivery of medical supplies and productive equipment in the US state of North Carolina during the COVID-19 pandemic.

Barbara Brustlein is Editor-in-chief of missio magazine, based in Munich, Germany.
Contact: b.brustlein@missio.de