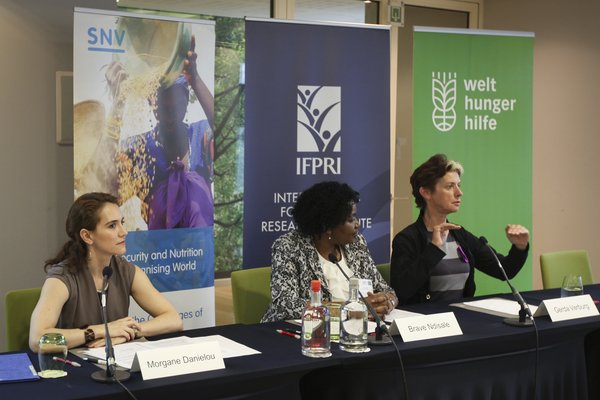 By 2050, four-fifths of humankind will be living in cities. The impacts that this urban growth is going to have on food security and nutrition were discussed at a workshop organised jointly by the International Food Policy Research Institute (IFPRI), SNV Netherlands Development Organisation and Welthungerhilfe.

Urbanisation is growing in leaps and bounds. Whereas two thirds of the world population were still living in rural areas in 1990, this ratio will have reversed by 2050, with far more than two thirds of humankind then living in cities. The impacts that this urban growth is going to have on food security and nutrition, how it is reshaping agricultural value chains and how small farmers can benefit from it were items discussed by the International Food Policy Research Institute (IFPRI) with Germany’s Welthungerhilfe and the Dutch development organisation SNV in the run-up to the European Development Days held in Brussels, Belgium, early in June.

The organisers dispelled one myth right at the beginning. Urbanisation is not the same thing as megacities. In the Global South, it is above all small- and medium-sized towns that are driving growth. By 2030, they are expected to accommodate around 40 per cent of sub-Saharan Africa and Asia’s population. And it is vital to find solutions for these people if they are not to suffer the same fate as the 1.5 billion people already living in urban slums today. These unique challenges faced by the urban poor were summed up by IFPRI Director-General Shenggen Fan: limited access to basic services (access to good food is not enough if e.g. no sanitation is available), vulnerability to income and price shocks, an increase in malnutrition/obesity owing to dietary changes and a strong dependence on informal markets for food supplies.

Informal markets are often associated with a lack of regulation, insecurity and poor quality, characteristics none of which we actually want to see in modern agri-food systems. So does the future lie with a formalisation of markets? Things aren’t that simple, as Delia Grace of the International Livestock Research Institute (ILRI) demonstrated. For most of the fresh food in developing countries is produced and marketed in the informal sector (e.g. 80 % of dairy products in Kenya, 83 % in India and 98 % in Tanzania). These so-called wet markets have numerous advantages. Food is fresh and cheap, and local breeds are used. ILRI veterinary epidemiologist Grace also explained that the equation “informal = unsafe, formal = safe” was by no means correct, referring to the results of surveys in Vietnam as an example. There, 100 per cent of the pork samples from a supermarket counter did not meet the country’s food standards; contamination with bacteria was not lower than in meat samples from the informal market.

Another aspect that must not be forgotten according to Grace is that women dominate food processing, where they ensure quality. A survey in Nigeria revealed that beef sold by women was much safer than the beef sold by men. Grace concludes: “If we only concentrate on risks and achieving formalisation in reshaping markets, this will have an anti-poor and anti-women effect.”

A need for rural-urban recognition and investment

The conference participants agreed that the broken linkages between cities and rural areas had to be brought on track again. Not only because despite all the encouraging developments regarding urban agriculture, the amount produced would never suffice to feed the entire urban population. Pointing to cities like Beijing in China, Gerda Verburg, UN Assistant Secretary-General and Coordinator of the Scaling Up Nutrition (SUN) Movement, noted that factors such as air pollution were jeopardising the production of healthy food. Moreover, supplying the urban population with food offered huge opportunities for small-scale farmers.

Rodney Mushongachiware, Linkage Advisor of the Agricultural Partnerships Trust (APT) presented an example in this context. In Zimbabwe, a country with 15.6 million inhabitants, an urban population share of 32.4 per cent and a 2.3 per cent annual urbanisation growth rate, that is hit by periodic droughts and suffers from food insecurity, about 70 per cent of the population derive livelihoods from agriculture. In spite of this, most horticulture and fruits are imported from South Africa, also because the quality of the imported goods is valued more highly than that of goods produced domestically. For a long time, the economy was developed with the aid of cash crop cotton. A European Union-funded programme has now enabled several thousands of small-scale farmers to successfully shift from cotton growing to horticulture and to be linked to the urban markets. “Smallholders can supply the quality in demand. All they need is information on which crops to produce and in what quality,” Mushongachiware believes.

Challenges and opportunities of smallholder farmers

Of course numerous other obstacles have to be overcome in addition to the information deficit if such success stories are to be scaled up. They include delay in payments by buyers, poor farmer organisation and low bargaining power vis-à-vis big companies on the farmers’ side; high transaction costs, traceability questions and unwillingness to invest in and capacitate farmers on the private sector side; and poor infrastructure and transport to support storage of perishable fresh produce, the specialisation of formal agricultural extension institutions in traditional crops, low financial literacy and the competition from big suppliers who enjoy economies of scale as cross-cutting issues.

However, the wide range of opportunities for the involvement of small-scale farmers and rural areas as a whole should not be forgotten: increasing demand of the growing urban population, local markets benefiting from spill-over effects from production for urban markets with regard to new types of food with a high nutritional value, the growing demand for organic food with the prospect of higher profit margins, and value addition for rural areas, for example through processing on the spot.

A food system for everyone

The supreme goal for all activities had to remain that of making the food system inclusive and resilient, the participants stressed at the end of the meeting, taking up the keynote address by Brave Ndisale, Strategic Programme Leader for Food Security and Nutrition at the UN Food and Agriculture Organization (FAO). This also included that contract farming systems, which were generally desirable, did not jeopardise crop diversity, as FAO agro-industry expert Jorge Fonseca criticised in corresponding programmes in Costa Rica, or that concentrating on the high standards required for the export markets must not lead to jeopardising food safety in the local markets with inferior quality, as Clement Onyango, Director of the Consumer Unity & Trust Society Africa Resource Centre (CUTS ARC), pointed out in the case of Kenya. There was a need for  strong consumer groups demanding safe products, the latter maintained.

Ultimately, everyone – men, women and youth, producers and consumers, the users of formal and informal markets, and the rural and urban population – were to benefit from these food systems. The prospects for this to happen are not bad, according to Ann Tutwiler, Director General of Bioversity International. “We used to be annoyed by the urban bias in political interests – now we ought to take advantage of it,” she noted.