Land prices and expected deforestation in Brazil: The role of infrastructure and forest conservation policy

The expansion of commercial agriculture in Brazil has detrimental effects on natural ecosystems. Our authors have examined how the Brazilian land market responds to transport infrastructure investments and shifts in the environmental governance regime especially in the Amazon region. Their results indicate that land users speculate based on planned infrastructure improvements and may also relocate in response to conservation policy.

Preserving tropical forests while providing food, feed, fuel and fibre to a growing population is a key challenge for sustainable development. With massive land reserves and a modern agricultural sector, Brazil has a key role to play in managing the trade-off between related SDGs, such as “Zero Hunger” and “Life on Land”. Correspondingly, Brazil’s output of globally traded commodities, such as soy and beef, has been on the rise in the last two decades while impacts on tropical forests have been quite variable over time and throughout the landscape. Extremely high levels of annual forest loss early in the 2000s were reduced by almost 80 per cent between 2004 and 2012 due to stringent conservation governance. Since these years of consistent reduction of deforestation in the Amazon, rates have been on the rise again with a dramatic increase of 30 per cent between 2018 and 2019.

Pressure on forests depends on the net benefits land users expect to obtain from different land use options. These expectations are based on local agro-biophysical characteristics, but also on past experiences of, and access to, information on infrastructure investments and environmental governance. The former can make forest conversion more attractive, for example, as a means to claim land which can later be sold at higher prices, whereas the latter makes deforestation less attractive. Using land market data from Brazil, we have studied whether, where, and to what extent, information about planned road infrastructure investments on the one hand and actual changes in environmental governance effectiveness on the other have affected expected returns to land under different uses as reflected in land market prices.

Standard economic theory predicts that per hectare prices of land correspond to land users’ discounted expected net returns to its use. Without information about the future, these expectations are formed based on past knowledge about possible net returns to alternative land uses. If actual prices on land markets exceed expectations based purely on knowledge of the past, we can assume that land users are pricing in information about the future – in other words, they speculate. In our study, we used this notion to provide evidence for causal relationships between forest land prices, road infrastructure investment and conservation policies during the period between 2001 and 2012. We focused our analysis on the Brazilian Amazon and Cerrado biomes because they host socio-ecologically important ecosystems, together with a dynamic agricultural frontier, and they differ in the degree of land use restrictions imposed by Brazil’s environmental policy regime.

Research has repeatedly described land market speculation in the Brazilian Amazon as a process in which forest clearing is a means to secure future rights to land. Since the 1960s, road infrastructure investments and agricultural subsidies have lured farmers and investors to Brazil’s agricultural frontier in expectation of a better life or high rents from timber extraction and commercial agriculture. Increasing demand for land thus has often preceded both legal and illegal deforestation.

In our study, we adopted an ex-post perspective to quantify the effect of information on the location of future road infrastructure investments on land prices. Public investment plans are regularly published and can thus inform land use behaviour. If land users and investors are sufficiently confident that planned investments materialise, we should be able to see that reflected in land prices. In fact, we found that expected improvements in travel time from forest margins to major market places do increase prices of forest land long before the actual improvement materialises. This increase in demand for land under forest can be interpreted as an ‘early warning signal’ for deforestation, but not equally across the region. We compared our identified zones of land market speculation with a map of deforestation hotspots and found that effects are more pronounced in areas along the South-North transport route BR-163 and in the so called MATOPIBA region (MATOPIBA is an acronym that uses the first two letters of the four states into which soybean production is expanding: southern Maranhão, Tocantins, southern Piauí and western Bahia). Both areas have experienced a massive expansion of soy and beef production in the past decade.

Land markets as a barometer for conservation policy leakage

If improvements in environmental governance reduce land users’ expected net returns from forest conversion, do they relocate investments to places with weaker regulations? If so, forest conservation policies can become less effective as a result of leakage, i.e. the displacement of land uses from one to another region. Following our reasoning above, such leakage should be accompanied by an increase of land prices in the untargeted region. In our study, we measure changes in environmental governance in terms of the number of fines issued for infractions of forest conservation law by Brazilian authorities. In the Amazon biome, changes in fine intensity were associated with reductions in forestland prices. However, we also observed that forestland prices simultaneously increased in the less protected Cerrado region, thus potentially indicating conservation policy leakage. 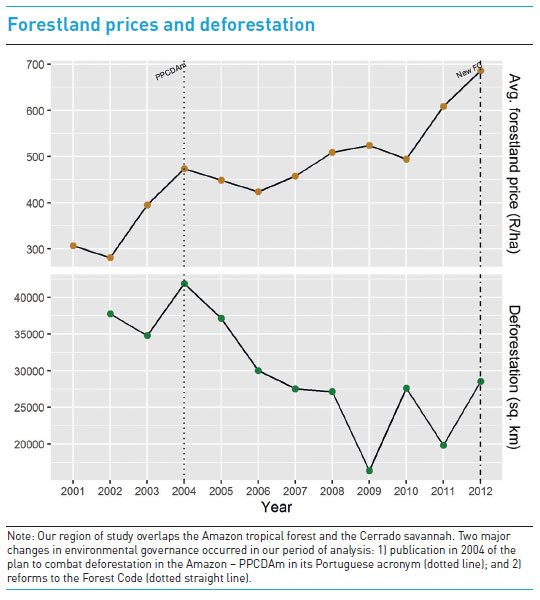 We have looked at the well-documented trade-off between conservation and agricultural development at the Brazilian agricultural frontier through the lens of land markets. The role of land speculation in fuelling this trade-off has been repeatedly described, but was rarely quantified. Our results show, moreover, that studying land markets can help us to understand conservation policy leakage, another well-known phenomenon that is notoriously difficult to measure. Data on land market transaction is not always easy to come about, but digitalisation and improvements in land registry systems across the tropical world, including as a result of international REDD+ investments, are likely to change this in the future.

One key lesson from our study and related prior work is that land use governance is a nexus challenge and can only be effective if incentives to land users are coherently aligned across public policy sectors. This was the spirit of the so-called PPCDAm, Brazil’s plan to combat deforestation in the Amazon that miraculously turned the country into a global conservation pioneer in less than half a decade. In addition, our findings warn against reckless communication strategies by political leaders. If political discourse raises expectations of better road access to primary forests and lower support to environmental law enforcement, irreversible damage will be caused regardless of whether politicians actually walk their talk. Land markets can be leveraged to allocate natural resources to their most productive uses, but only if coherent policy mixes safeguard equal access and promote sustainable investment decisions.

Jan Börner is a professor at the Institute for Food and Resource Economics (ILR) and Senior Researcher at the Center for Development Research (ZEF) at the University of Bonn.
Contact: javier.miranda@ilr.uni-bonn.de