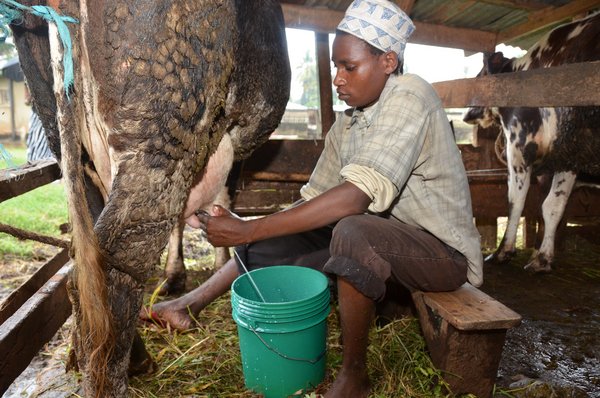 In late February 2018, members of the European Parliament’s Committee on Development analysed how to improve policy coherence for development when reforming the Common Agricultural Policy.

Ever since its inception in 1962, the European Union’s Common Agricultural Policy (CAP) has seen constant change. Whereas one of its original aims was to secure food in post-war Europe, agriculture had to cope with milk lakes and butter mountains. Government money was spent to sell large surpluses, which disturbed trade.

Nowadays, there are no export subsidies, and with the exception of arms, the poorest countries may export anything they want to the EU without duties being charged. But whether this really makes the CAP, whose next reform is scheduled for 2020, “fit for development”, was discussed in the European Parliament’s Committee on Development (DEVE) in Brussels, Belgium, in late February 2018.

Exports are threatening the milk market in Burkina Faso

The production approach was still at the core of the new CAP, criticised Olivier de Schutter, Deputy Chairman of the International Panel of Experts on Sustainable Food Systems (IPS-Food), in Brussels. Adama Diallo, dairy herdsman and Chairman of the National Union of Smallholders and small dairies in Burkina Faso (UMPL-B), explained what this meant for the producers in the South. With nine million dairy cattle, the sector accounts for 17 per cent of the country’s gross income. Since the 1990s, numerous micro-dairies have developed that take in between ten and 2,000 litres a day for processing. Rising demand for dairy products is interesting not only for smallholders but also for international corporations, which export the milk powder to Burkina Faso, according to Diallo, who maintains that with just five per cent duty being charged, local dairy producers are not sufficiently protected. Whereas local milk costs around 500 CFA Francs a litre, the same quantity of milk made of skimmed milk powder and palm oil additive can be bought for just 250 CFA Francs. This dumping price was preventing the development of social structures and Burkina Faso establishing a value chain of its own, and it was making the country dependent on food imports, Diallo told the committee. Diallo demands that his own government introduce flanking measures for domestic milk production and that the EU halt skimmed milk exports.

It was not at all easy to circumscribe the negative impacts in the developing countries to trace them back causally to the EU Common Agricultural Policy, according to Maria Blanco, an agricultural economist from Madrid, Spain. Blanco examined the latest CAP financing period with regard to such impacts. In the context of world-wide agricultural trade, the CAP had fewer effects on prices and quantities than were commonly ascribed to it. Blanco nevertheless maintained that there were elements that ought to be changed. Unfortunately, the Member States were once again opting more strongly for coupled payments, which was keeping production at a constant level and putting pressure on prices for farmers within and outside the EU. However, Blanco praised Germany for no longer having payments coupled to production.

Nevertheless, this is not a growth guarantee, either. For, according to Blanco, without payments depending on production, less protein feed is produced, and the demand for feed has to be covered by imports, putting pressure on the natural resources in the region’s countries. Therefore, Blanco argues, it has to be carefully assessed which products are supported by coupled payments in which regions and for how long. He maintains that the global treaties of Agenda 2030 and the Paris climate agreement provide an umbrella for a coherent development policy in which the CAP would be one of a number of elements, and concludes that a sector approach is more important than just focusing on the CAP itself.

Olivier de Schutter drew distinctions between several groups of poor people and people suffering from hunger. The major share of them, around 300 million, were living in the slums of the large cities and were producing virtually no food. Local governments could only provide these people with imports. The next largest group is the smallholders, whose production potential, de Schutter claims, has not yet been fully exploited. Smallholders like Diallo produce for the local market, but they have hardly any opportunities to gain access to the domestic market as a whole. In many countries, they compete with the smallest group of farmers who are integrated in the value chain and mainly grow cash crops for exporting. Forty-five per cent of soy cultivated world-side is exclusively for export, and maize and sugar show similar figures.

While international trade was resulting in those crops being cultivated that grew best in certain countries, de Schutter maintained that there could be no mention of a balance between countries with a food surplus and those with a food deficit. He explained that agricultural produce went wherever purchasing power was greatest. Against the background of climate change, decentralised and regional food security was the best option.

Berlin agricultural economist Harald von Witzke explained that agricultural production and dietary habits in the EU required around 30 million hectares of land for food and feed in other countries. Witzke believes that extensifying agriculture through organic farming is the wrong approach. If Europe was 100-per cent organically farm-managed, virtual area import would rise to 70 million hectares. Von Witzke recommended raising productivity in the total existing area under cultivation and making use of available innovations in pesticides and herbicides, genetic engineering and digitalisation as well as modern seed and fertiliser, both in Europe and in the developing countries. The precondition for this was free access to resources. It had become clear that among the developing countries and regions, those with good governance, market economies and skilled labour were making the most progress.