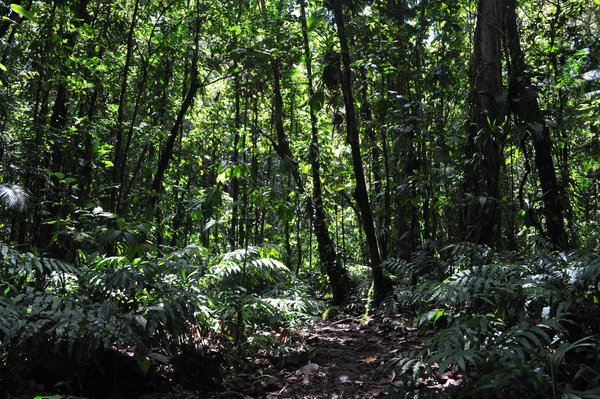 Rroughly 1.6 billion people depend on forests for their livelihoods.
Photo: S. Richter/Rural 21

The restoration of forest landscapes holds a considerable potential for sustainable development, climate change mitigation and adaptation. However, the involvement of the local population is key in this context, various aspects of which were discussed by experts at a meeting in Bonn, Germany last May.

Forests cover around 30 per cent of the world’s land surface, and roughly 1.6 billion people depend on them for their livelihoods. While deforestation has lessened somewhat in recent years, it is still progressing at an annual rate of 0.08 per cent. Forest Landscape Restoration (FLR) initiatives have been agreed at international level to restore degraded land and forest ecosystems. FLR initiatives seek to combine the restoration of the ecological integrity of a forest with the wellbeing of the local population to achieve sustainable development. The potential of such measures for the achievement of the Sustainable Development Goals (SDGs) was discussed at a meeting organised by the Institute for Ecology and Action Anthropology (infoe) in Bonn, Germany in May 2017. The focus was on an ecosystem- and rights-based implementation of FLR measures in Africa, where three million hectares of forest is lost each year.

Lena Bretas of the Department for Rural Development, Land Rights and Forests at Germany’s Ministry for Economic Cooperation and Development (BMZ), told the meeting about the challenges that the African Forest Landscape Restoration Initiative (AFRI100) faces. AFRI100 seeks to bring 100 million hectares of degraded landscapes into restoration by 2030. The scheme pursues an inclusive approach considering the rights of locals and aims to enhance forest management, build institutional capacities and promote agroforestry. AFR100 is supported by the BMZ, and the World Bank is among its partners. Twenty-two countries have made contributions to the scheme so far.

BMZ bases its forest action plan on the so-called REDD+ activities: reducing emissions from deforestation and degradation, forest carbon stock conservation, the sustainable management of forests and the enhancement of forest carbon stocks in developing countries. Governments, businesses, civil society and Indigenous Peoples have formed the Forest Carbon Partnership Facility (FCPF), which assists countries in their REDD+ activities. Daniel Ole Sapit is FCPF Observer for Indigenous Peoples and Programme Co-ordinator for the Mainyoito Pastoralist Integrated Development Organization (MPIDO) in Kenya. At the Bonn meeting, he explained the significance of FLR Initiatives for indigenous communities and their rights.

Ole Sapit described the symbiotic and interdependent relationship between indigenous peoples and forests. “With their climate-resilient livelihoods, they contribute least to emissions but immensely to nature conservation,” he said. “These people continue to suffer from historical marginalisation and exclusion. Restoration approaches tend to be state-centred and do not target their unique challenges.”

However, Ole Sapit also noted that indigenous forests and peoples were addressed in various contexts at international level. The Paris Agreement on combating climate change offered a platform for an exchange of experiences, while the 2030 Agenda for Sustainable Development mentioned securing land rights. And the United Nations had explicitly adopted a resolution addressing the rights of indigenous peoples.

Referring to essential elements at the interface between ecology and rights, Ole Sapit stressed the need for the local population to participate in decision-making at national level and shape national strategies and policies. In Tanzania’s Shinyanga project, state-imposed solutions had failed, and progress was only made when local institutions came up with their own bye-laws. In Kenya’s Loita Forest Project, indigenous Massai rejected sustainable forest management over concerns about gazetting forests. Integrating locals and respecting human rights were key to the sustainability of projects, Ole Sapit concluded.

The role of the VGTT

Marion Aberle, Senior Advisor on Land Policy at Deutsche Welthungerhilfe, noted that the struggle for resources such as arable land was intensifying, with land growing scarce and populations growing. Just a fifth of the people depending on forests actually held rights to their land. And governments were sometimes actively involved in land-grabbing. Aberle noted the significance of the Voluntary Guidelines on the Responsible Governance of Tenure (VGTT) endorsed by the United Nations Committee on World Food Security (CFS) in 2012 in the context of forests and indigenous people.

The VGGT states key principles such as food security as a human right, the recognition of land rights and respecting indigenous knowledge. It stresses the right to consultation and participation, centring on prior informed consent, and pursues a bottom-up approach adhering to the guideline of “nothing for the people without the people”.

“The VGGT is a good tool, but it is very complicated and has many compromises,” Aberle said. She emphasised that people affected by land issues should be given time to consider its implications. DWHH was working on VGTT in six countries. Peter Saile, Senior Advisor on Forests at Deutsche Gesellschaft für Internationale Zusammenarbeit, explained that GIZ was reaching out to colleagues involved in VGGT issues at the United Nations Food and Agriculture Organization to develop a structure to consult indigenous groups and draw on existing experience. Bretas noted that BMZ was seeking to mainstream the VGTT and was negotiating with partner countries on the issue.

Much of the discussion focused on government respect for human rights in the VGTT context. Aberle pointed out that the Voluntary Guidelines had been internationally negotiated and agreed. In this respect, they represented a good framework for forest restoration efforts. However, without a country’s government support for human rights and the integration of people affected in the decision-making processes, restoration projects could hardly be sustainable.