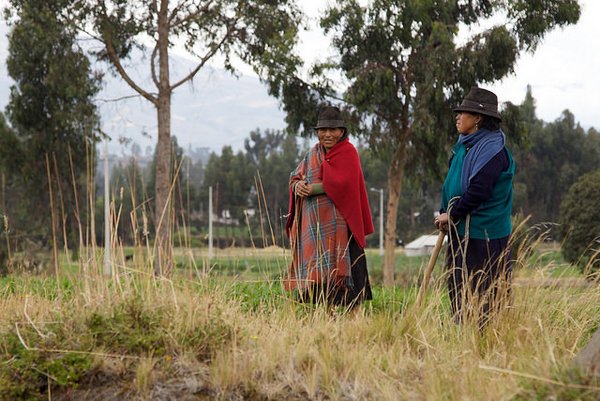 Three German NGOs organised an event in September to mark the tenth anniversary of the Declaration on the Rights of Indigenous Peoples by the United Nations General Assembly. Participants stressed the role of indigenous peoples in achieving the SDGs.

“Indigenous peoples make a special contribution to achieving the Sustainable Development Goals. But they also need support to retain their practices and assert their rights,” said Angelika Kappel, Mayor of the City of Bonn, Germany, in her welcome to participants at an event held on the 13th September 2017 to mark the adoption of the Declaration on the Rights of Indigenous Peoples by the United Nations General Assembly (UNDRIP) ten years ago.

The event was held by the United Nations Association of Germany, an independent organisation that aims to raise awareness among the German public of events in international politics and German UN policy, infoe, a German non-profit organisation that seeks to provide a forum for indigenous peoples and the Climate Alliance, a network of some 1,700 municipalities and districts in 26 European countries, regional governments and other organisations active in combating climate change.

Delivering the keynote at the meeting, Eriberto Gualinga, official representative of the Kichwa community of the Sarayaku, gave an account of experience with rights-based development in the southern part of the Ecuadorian Amazon Forest.

His people live in a region covering around 135,000 hectares, have their own political system, and recently elected a woman president. Gualinga told the meeting that their common goal was to “achieve a ‘good life’ based on knowledge handed down by ancestors about living in the forest, the fertile soil the area offers, a legal system the community has developed and its traditional culture”.

Gualinga emphasised his people’s dependence on the forest, and he explained that the big threat to his community was oil exploitation, which was destroying not only parts of the forest but also people’s livelihoods.

Ecuador received international acclaim for its recognition of the rights of nature and its vision of “buen vivier” (good life) stemming from its indigenous peoples. However, its ambitious proposal in 2007 not to exploit oil in its Yasuni National Park in return for financial compensations by the international community did not find favour with the industrial nations.

A mere four per cent of the 3.6 billion US dollars the government had demanded had been raised by 2013. The scheme was scrapped, and in 2014, Ecuador’s government gave its own oil company the go-ahead to drill for oil in the park. Around half of the country’s income is earned with oil.

Indigenous lands were still being granted to oil and mining companies

A group of Climate Alliance representatives who visited Ecuador claim that companies operating in its oil industry are relying on a decrepit and hazardous pipeline network prone to leakages. They say that more than a thousand oil mud and formation water ponds have been left behind that have contaminated the groundwater and brought disease and death to the locals, while international corporations operating in the region have so far refused to pay compensation.

Gualinga explained in Bonn that indigenous lands were still being granted to oil and mining companies, while community leaders were being persecuted for claiming their rights. More people had been forced to abandon their territories, entirely in violation of their ancestral rights.

To demonstrate how the Sarayaku and other indigenous peoples in the region live and draw attention to their plight, campaigners like Gualinga have organised tours for NGOs and others interested in the issue. They have learnt how to use the computer and how to speak in public. Sarayaku representatives have shared their experiences with other Latin American tribes as well as with other communities throughout the world.

Thomas Brose, Executive Director of the Climate Alliance, stressed the notion of the forest as a living organism that had to be addressed at local, regional and international level, and hence the need to embed Amazonia in an international network. The lack of legal security for indigenous peoples was a crucial issue, although here, some progress had been made, with reference being given to them not only in the UNDRIP but also in Convention 169 of the International Labour Organization.

Annett Moehner, Team Leader at the Adaption Committee of the UN Framework Convention on Climate Change, presented the new UN Platform for Indigenous and Local Climate Action. Created by the Paris Agreement, the platform is to enable indigenous peoples and local communities to share knowledge and experience on reducing emissions and adapting and building resilience to climate change.

It will be defined in more detail at COP23, the Bonn Climate Change Conference, in November 2017. “Indigenous peoples are threatened by oil exploitation and by climate change, but they also hold a treasure trove of knowledge showing the world how to adapt,” Moehner told the meeting.

Stefan Ehrentraut of the Human Rights Sector Programme run by Gesellschaft für Internationale Zusammenarbeit (GIZ) noted that activities supporting and drawing attention to indigenous peoples were under way mainly in Latin America, but hardly in Africa and Asia. In most countries, indigenous peoples were among the poorest and most marginalised members of society.

According to Ehrentraut, GIZ maintains a safeguard system in which all new projects are assessed with regard to human rights and the rights of indigenous peoples, and the German government has introduced binding guidelines for human rights encompassing free prior informed consent.