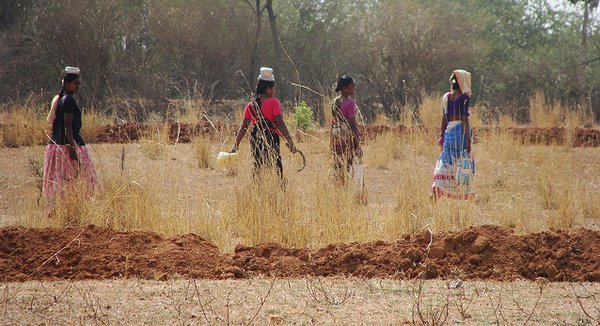 India is suffering from a heatwave

In India, more than 300 million people are currently affected by the prolonged heatwave triggered by El Niño. Field labourers no longer have any work, many children are not attending school, the population is suffering from malnutrition and shortage of drinking water.

More than 300 million people are affected by the continuing heatwave that has hit India, reported World Vision at the end of April 2016. The long-lasting dry period has caused harvests to fail several times in succession. According to government information, out of desperation more than 200 farmers have taken their own lives since the beginning of the year.

The whole of south Asia is currently suffering from the impact of the El Niño climate phenomenon and the drought it has caused. But India is being hit particularly hard, the worst affected federal states being Uttar Pradesh, Madhya Pradesh and the Marathwada Region with some 30,000 villages. Hardly any drinking water is to be had in these regions, most wells have dried out, and scarcely any feed is available for the animals.

Many people have now abandoned their home villages hoping to find better living conditions elsewhere for themselves and their families. Numerous children are already exhibiting symptoms of malnutrition.  Vitamin A deficiency is a particular problem. Vitamin A is important for sight and for strengthening the immune system. Half of the families in the areas hit now eat just rice and potatoes. Lentils, a major source of protein, particularly for children, have become so expensive that many people can no longer afford them.

Numerous children no longer attend school because their parents are unable to care for them and pay schooling fees, or because they have left the region with their families. Some 60 per cent of the people in the drought-affected regions work as day labourers on the fields, but currently there is no work for them.

The acute shortage of drinking water drives people to draw water from the remaining waterholes which, however, are often contaminated with germs. Consequently, there is a rise in diseases caused by polluted water. The government has begun to send drinking water to the affected regions on trucks and trains. But the demand is so high that rural areas in particular are often not reached.