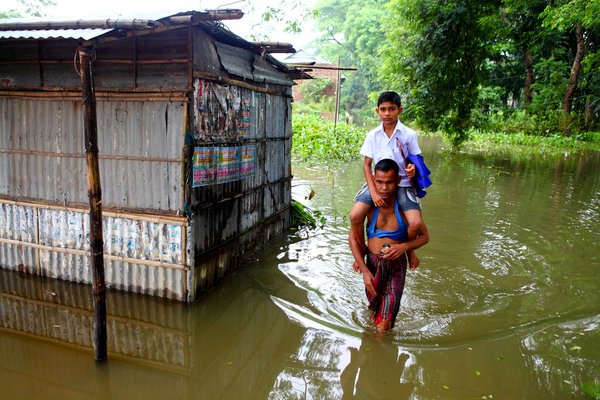 Future warming will lead to increasing river flood risks worldwide, according to experts from PIK. Hence, it is necessary to invest now in additional adaptation measures to protect millions from flood disasters in years to come.

Rainfall changes caused by global warming will increase river flood risks across the globe, warned experts from the Potsdam Institute for Impact Research (PIK) in January 2018. Already today, fluvial floods are among the most common and devastating natural disasters.

The experts have now calculated the required increase in flood protection needed up to the 2040s worldwide, breaking it down to single regions and cities. They find that the need for adaptation is greatest in the US, parts of India and Africa, Indonesia and in Central Europe. Inaction would expose many millions of people to severe flooding.

An increase in river flood risks over the next 2-3 decades will be driven by the amount of greenhouse gases already emitted into the atmosphere, hence it does not depend on whether or not we limit global warming.

Without additional adaptation measures such as enhancing dykes, improved river management, intensifying building standards or relocating settlements – the number of people affected by the
worst 10 per cent of all river flooding events will increase in many places.

Asia is hardest hit by floods

In South America the number of people affected by flooding risks will likely increase from 6 to 12 million, in Africa from 25 to 34 million, and in Asia from 70 to 156 million. The real numbers might be even higher in the future as population growth and further urbanisation is not taken into account. In Africa, the largest adaptation need will arise in the Niger River basin, and along the Nile and the Zambezi.

Asia is the continent with the largest historical high-end flood risk as well as the strongest increase in that risk. Historically, Pakistan is already highly affected and will observe almost a doubling in high-end flood risk on a subnational level. All of its eight provinces are already affected in the historic period. Most affected are the eastern provinces of Punjab and Sind. A similarly strong flood risk and adaptation need can be seen in 26 of India’s 36 states and union territories, most affected is the province of Bihar.

The study is based on comprehensive computer simulations using existing data on rivers from a great number of sources. Data on changes in rainfall, evaporation and the like are from the worldwide largest modelling inter-comparison project of climate impacts (ISIMIP). The spatial detail of the new study is roughly ten times more precise than in commonly used climate computer simulations, according to the researchers.