Improved water management offers a range of benefits to people living in the dryland tropics, where water is scarce. Watershed programmes based on active participation of the rural population bear the potential to ensure food security, contribute to economic growth and help conserve natural resources. An ICRISAT programme in India provides an example of a science-led, knowledge-based approach in this field.

The word “drought” no longer triggers spells of anxiety or fears of falling into the poverty trap for 270 farming families of rainfed Kothapally village in Andhra Pradesh, India. Their confidence stems largely from an active involvement in the unique Adarsha (ideal) watershed programme that was initiated by the International Crops Research Institute for the Semi-Arid Tropics (ICRISAT) 13 years ago. And the payoffs of their involvement have been enormous. When the drought in 2002 led to a drastic decline in the share of agricultural income of non-watershed families in Kothapally village from 44 to 12 per cent, no ripple effects were felt by the farmers who had participated in the programme. In 2001, two years after the launch of the watershed project, the average household income in the village was 795 US dollars (USD) compared with 622 USD in the neighbouring village.
Rainfed agriculture is the source of most of the food from 80 per cent of global agriculture for poor communities in developing countries, and its importance varies regionally (95 % in Africa and 60–65 % in Asia). With growing evidence of global warming and its associated impacts on climate change, the existing water scarcity scenario is getting exacerbated by increasing rainfall variability. Hence, developing water resources, expanding irrigated area with a minimum of environmental impacts, and enhancing food production with progressively diminishing water supplies are a major challenge (see Figure below).

Fully aware of the existing yield gaps and a lack of knowledge among small and marginal farmers, ICRISAT and its partners developed innovative, farmer-centric, knowledge-intensive soil, water, nutrient and crop management options at the watershed scale through community participation. A consortium model was adopted with partners including international, national, governmental and civil society organisations (CSOs). The programme used a holistic approach that involved (i) conservation, upgrading and utilisation of natural endowments such as land, water, plant, animal and human resources in a harmonious and integrated manner with low-cost, simple, effective and replicable technology and (ii) reduction in inequalities between irrigated and rainfed areas and poverty alleviation.

A combination of people-centred interventions, up-to-date science tools that enrich watershed programmes and capacity building that enables them to develop adequate adaptation strategies drawing on a combination of local knowledge were some of the key features of ICRISAT’s involvement in watershed development. Based on participatory assessment of the constraints faced and potential as well as yield gap analysis using crop simulation models in consultation with the community, interventions such as rainwater harvesting, soil moisture conservation, soil fertility management, use of drought-tolerant high-yielding varieties, land and water management practices and integrated pest management options were introduced in partnership with the community (see Box at the end of the article). The model was started in India and scaled out in China, Thailand and Vietnam.

A range of positive effects 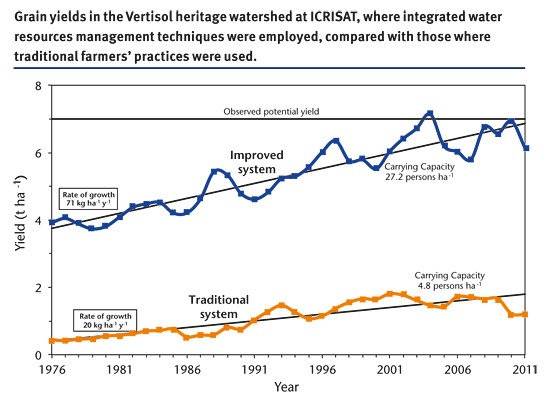 Improving water availability. The ICRISAT model ensured improved productivity (see Figure above) with the adoption of cost-efficient water harvesting structures as an entry point for improving livelihoods. This was made possible with the efficient management of rainwater and in-situ conservation, establishment of water harvesting structures and improved groundwater levels. In Bundi, Rajasthan, for example, water levels in the wells were enhanced by an increased groundwater recharge of 5.7 metres, which permitted an expansion in the irrigated area from 207 to 343 hectares. In Kothapally watershed, the groundwater level rose by 4.2 metres in open wells (see Figure below).

The construction of check dams was based on the community needs and executed by the villagers themselves. Due to increased groundwater recharge, an additional 200 hectares in the rainy season and about 100 hectares in the post-rainy season were cultivated with different crops and cropping sequences. The effectiveness of improved watershed technologies was evident in reduced run-off volume, peak run-off rate and soil loss and improved groundwater recharge. For instance, in Tad Fa watershed in Thailand, contour cultivation, vegetative bunds and fruit trees grown on steep slopes reduced seasonal run-off to less than half and soil loss to less than one-seventh as compared to the conventional system.

Income generation. Income generating options for the landless and women in Kothapally and other benchmark watersheds have included the setting up of village seed banks through self-help groups, value addition through seed material, product processing such as dhal making (a preparation of pulses), grading and marketability, poultry rearing for egg and meat production and vermicomposting. An average household income of 1,066 US dollars (USD) was generated from crop diversification and other systems in the watershed compared to 734 USD in the non-watershed, reflecting an increase of 45 per cent due to watershed interventions.
The consortium’s success in Kothapally led to its replication elsewhere in Andra Pradesh and in the other Indian states of Karnataka, Madhya Pradesh, Rajasthan and Jharkhand. Between 2000 and 2003, investments in new livelihood enterprises such as a seed oil mill, tree nurseries, and vermicomposting increased average income by 77 per cent in Powerguda, another poor village in Andhra Pradesh. Impact assessment studies for Andhra Pradesh’s Rural Livelihoods Program (APRLP) in five districts with improved watersheds revealed impressive returns of 608 million USD in ten years for four major crops (sorghum, groundnut, pigeonpea and maize).

Improving soil health. ICRISAT and the Government of Karnataka have opted for a knowledge-based mission mode initiative by forming a consortium and a network of stakeholders to share their knowledge on weather and soil health and improved management practices covering all the 30 districts of the state. During 2011, the soil test-based nutrient management interventions, along with improved seeds, seed treatment and use of biofertilisers, led to a 21–66 per cent increase in crop yields covering three million hectares. An innovative extension system was used as well as an institutional arrangement to empower the farmers through the Rytha Samparka Kendra (the state’s extension service centre), farm facilitators and innovative supply chains. The approach has benefited 3.3 million farmer families since 2009 through increases in productivity of 21-66 per cent thanks to the farmers’ new practices. For the Government of Karnataka, this translated into an annual agricultural growth rate of 5.9 per cent during 2009–10 and 11.6 per cent growth during 2010–11. During 2011, three million hectares were covered in the rainy season, and the economic returns were to the tune of 130 million USD.

Introducing micro-enterprises. Consortium partners introduced a number of micro-enterprises such as vermicomposting, biopesticide production, livestock rearing, nursery raising and wasteland development using biofuel (Jatropha) plantations for women self-help groups (SHGs) in Kothapally. Lakshmi, once a poor farm labourer, today earns 36 USD per month from vermicomposting. She has inspired and trained 300 peers in 50 villages of Andhra Pradesh and was honoured as Fellow of the Jamshedji Tata National Virtual Academy for Rural Prosperity for empowering women.

Conserving biodiversity. Pronounced agro-biodiversity impacts were observed in Kothapally watershed, where farmers now grow 22 crops in a season with a shift in cropping pattern away from cotton (200 ha in 1998 to 100 ha in 2002) to a maize/pigeonpea intercrop system (40 ha to 180 ha).

In China and Thailand, the watershed projects resulted in changes in cropping systems such as the addition of new crops (legumes and fruit trees), new varieties, and adjustment in the cropping calendar and new investments in aquaculture and poultry.

Crop-livestock integration. Better crop-livestock integration is another tool for poverty reduction. The Lucheba watershed, located in Guizhou province in Southern China, has transformed its economy through modest injections of capital-allied contributions of labour and finance to improve its roads and water supply. With technical support from the consortium, the farming system intensified and diversified from rice and rapeseed to tending livestock and horticultural crops. Forage production, especially wild buckwheat as an alley crop, is a good forage grass for pigs and has controlled erosion and increased farm income.

Policy impacts. ICRISAT’s consortia experience has positively influenced recent policy reforms on watershed management in various Asian countries. The Indian Federal National Farmers Commission has made recommendations to the Government based on ICRISAT’s consortium watershed model. An ICRISAT-led consortium undertook a comprehensive assessment of impact of watershed programmes in India. Watersheds recorded an average benefit-to-cost ratio of two, with an internal rate of return of 27 per cent. Only one per cent of the watersheds studied showed less than one benefit-to-cost ratio in the country. The assessment demonstrates that community watershed management is a growth engine for the development of dryland areas.

The Adarsha watershed’s broad vision emphasises the fundamental importance of improved water management in a warming world. What has made the project model unique, replicable and so successful is the combination of technical solutions supplied by ICRISAT with community empowerment and socio-economic development. Watershed programmes can indeed ensure food security and add to the sustainability of natural resources when projects are executed based on scientific knowledge and with the participation of the rural population, as was done in Kothapally.

The major objectives of watershed management are the conservation, up-gradation and utilisation of natural endowments (land, water, plant, animal and human resources) in a harmonious and integrated manner with low-cost, simple, effective and replicable technology; generation of employment; reduction of inequalities between irrigated and rainfed areas and poverty alleviation. It effectively addresses the problems of rainfed areas that are hotspots of poverty, malnutrition, food insecurity, with severe land degradation, water scarcity and poor social and institutional infrastructure, and is a potential engine for agricultural growth and development in these areas. Management of natural resources at watershed scale produces multiple benefits in terms of increasing food production, improving livelihoods, protecting the environment, addressing gender and equity issues along with biodiversity concerns.

Its components include a knowledge-based entry point activity that is undertaken to build rapport with the community; in situ and ex situ conservation practices; integrated nutrient and management and integrated pest management to maintain soil fertility, manage pest and the environment; crop diversification and intensification through the use of advanced technologies, especially good variety of seeds, balanced fertiliser application and  supplemental irrigation; integration of agriculture (on-farm) and non-agriculture (off-farm) activities; and capacity building, among others. ICRISAT has adopted a holistic and participatory consortium approach that brings together various partners with expertise in different areas to expand the effectiveness of watershed initiatives and interventions.