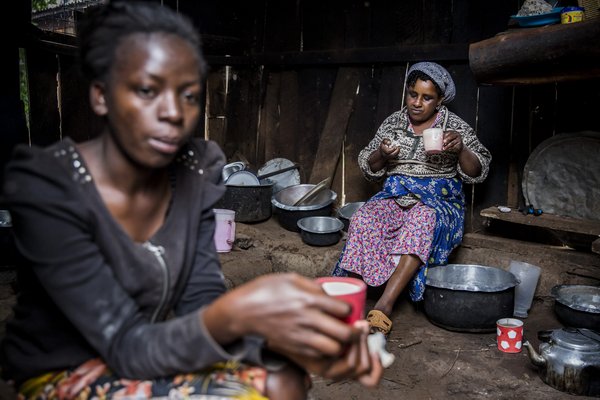 Farmers having breakfast in their kitchen, Meru County, Kenya. The SDGs were developed as indicators to combat inequality.
Photo: ©FAO/Luis Tato

Implementing the SDGs at the local level

The United Nations want to bring the Sustainable Development Goals (SDG) to the town halls. However, the approach of implementing Agenda 2030 through politics is a major challenge in a time full of conflict and radicalisation, as Achim Steiner, Administrator of the UN Development Programme told European MPs.

In January 2018, Achim Steiner, Administrator of the UN Development Programme (UNDP) spoke to the European Parliament’s Development Committee about political implementation of Agenda 2030.

Steiner described the times as worrying, with many conflicts and extreme weather events. He said that the last few years had shown that political and social developments are no longer following regular patterns, endangering fundamental values of social cohesion. This also applies to the United Nations, which since its foundation has represented an order and structure accepted by all its member states. The EU has a lot of experience with multilateralism and should work with the UN to help implement the shared goals and values in Agenda 2030.

The SDGs from 2015 did not arise by accident, Steiner noted. After the financial crisis and the Arab Spring, they had been developed as indicators to combat inequality and deficiencies in democracy, a counter-manifesto for the economic development of the world community. The SDGs are more indicators for the complex of social justice, sustainability, environment protection and universality, which can improve living conditions and promote social cohesion.

Local SDG offices have been set up in over 100 countries, and local politicians are using the goals for their local policies and trying to access resources outside public aid. In mid-February, for example, a donor conference had estimated the cost of reconstructing Iraq at USD 88 billion, a sum which public funding alone could never bring together.

Africa needs massive investment and private funds. One trillion US Dollars in African bank reserves are parked on the New York stock exchange and with banks in Zurich, Steiner explained. The UN wants to found so-called innovation laboratories to mobilise these reserves. There, parties, companies, NGOs and universities will work across ministerial boundaries to implement Agenda 2030 through preventive strategies to avoid hunger and poverty.

Another speaker was Musa Amul Nyassi, head of a delegation from the Gambian National Assembly, where free elections were held for the first time last year, after 22 years of dictatorship. As a guest at the European Parliament, Amul Nyassi said that Gambia has been working on a development plan since the Millennium Goals. The emphasis of the new plan was on strengthening women’s rights and preparing the country for communications technology. The new constitution is to abolish repressive laws and create committees to combat corruption and illegal trading. Trade agreements are planned with China and Turkey. The government looked to the EU for advice and technical support, and aid in repaying loans.