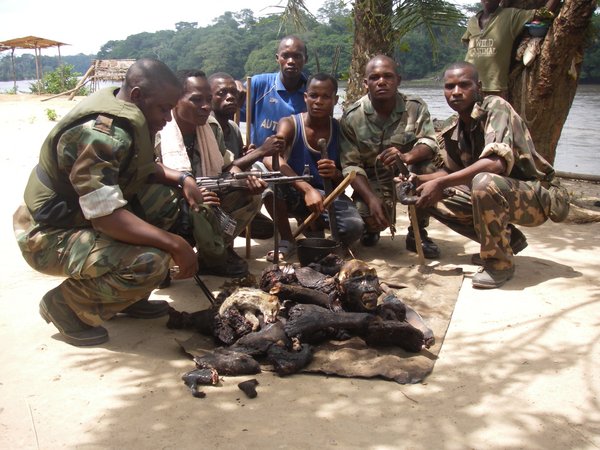 Hunting pressure on forest animals in Africa is on the increase

Scientists have predicted hunting pressure for the Congo Basin, and their prediction foresees severe to very severe hunting pressure across 39 per cent of this area. In January 2016 they published a detailed map which should help in regional planning.

Nowadays, and over the past 25 years or so, animal species in West and Central Africa are no longer being hunted solely for the purpose of local self-sufficiency, but increasingly also for sale in urban areas several hundred kilometres away. As a consequence, many animal populations have dramatically decreased or even disappeared altogether. A team of European researchers led by the Goethe University Frankfurt (Germany) has predicted hunting pressure for the Congo Basin and produced a detailed map which could help in regional planning. They published their results January 2016.

The hunted species are mostly mammals, but also some reptile and bird species. In many areas, they are the only cheap and easily available source of animal protein for the rural community. However, the commercialisation of the bushmeat trade has meanwhile led also to the “Empty Forest Syndrome” in forest ecosystems throughout Africa.

„Empty Forest Syndrome” threatens the existence of the rural population

The sale of bushmeat allows the rural community to purchase products or services which go beyond simple self-sufficiency. This practice has far-reaching ecological consequences, which, ultimately, also threaten the existence of the rural population. For example, with the disappearance of the herbivorous animals which serve as seed carriers, the forests disappear in the long term too.

The research team analysed reports published between 1990 and 2007 relating to bushmeat on sale on markets in the Congo Basin (Cameroon, Central African Republic, Democratic Republic of the Congo, Equatorial Guinea, Gabon and the Republic of the Congo). On the basis of the number of carcasses openly on sale and the catchment area of the markets, they calculated the annual harvest rates of bushmeat per square kilometre. They then correlated these figures with socioeconomic variables, such as population density, the density of the road network and the distance of the markets to the nature reserves. In a further step, they defined different classes of potential hunting pressure.

For a quarter of the total area, the researchers calculated a level of hunting pressure which was somewhat lower. However, their prediction foresees severe to very severe hunting pressure across 39 percent of the area of the Congo Basin. This is the case above all in areas with a very dense network of traffic routes, often in proximity to nature reserves. Thus the internationally famous Virunga National Park and the Okapi Wildlife Reserve in the east of the Democratic Republic of the Congo also lie in such areas.

The map produced by the researchers could help to support sustainable regional planning by ensuring that - as far as possible - roads do not carve up areas rich in wildlife. The map also identifies neuralgic points where the potential for hunting pressure is particularly high. Anti-poaching measures should concentrate on these zones.

The report stemmed from a joint project between Goethe University Frankfurt, experts in remote sensing at the University of Würzburg, and conservationists from WWF Germany.