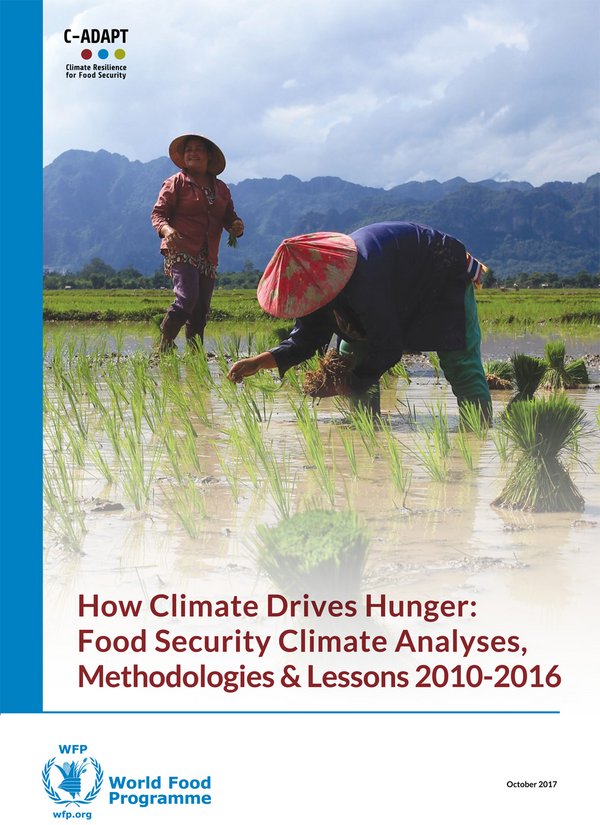 The report „How Climate Change Drives Hunger – Food Security Climate Analyses, Methodologies & Lessons 2010-2016“ was launched by the United Nations World Food Programme (WFP) in partnership with the Government of Sweden in November 2017.

The risk of hunger could increase by up to 20 per cent due to climate change by 2050 unless increased efforts are made to enable the world’s most vulnerable communities to better adapt to extreme weather events such as drought and flooding.

Drawing on such findings by the Intergovernmental Panel for Climate Change, the report offers a review of multiple analyses into the impact of climate change on food security by WFP and partners.

Gernot Laganda, Director of WFP Climate and Disaster Risk Reduction Programmes, noted at the launch of the report that humanitarian organisations need to change their way of operation in the future due to the impacts of climate change.

„Understanding the way climate risks play out at country level is critical for effective response planning, but also helps us anchor community-based prevention and adaptation activities in country strategic plans. If countries remain stuck in a pattern of repetitive crisis response, but lack the planning and financing tools to take a more forward-looking approach to risk management, we will never achieve the Sustainable Development Goal of a world with zero hunger by 2030,” Lagenda said.

Research for the report was undertaken by WFP under the Climate Adaptation Management and Innovation Initiative (C-ADAPT), launched in 2013 and funded by the Swedish Government. The assembled material provides an overview of major climate-change and food-security challenges, while outlining key policy and programming options available to governments and their partners. Country-specific analyses focuses on 15 nations that are particularly vulnerable to the effects of climate change.