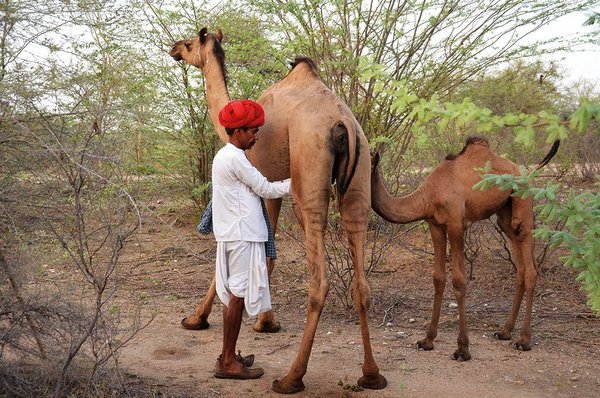 Local breeds can be important in decentralised value chains, as in camel dairy development in Rajasthan/ India.
Photo: Ilse Köhler-Rollefson

How can we make the livestock sector more resilient?

Livestock is a crucial link between people and the environment that can have both positive and negative effects. For a One Health approach, we need to re-balance the relationship between animals and land and weigh efficiency against resilience, our author maintains.

During the height of the COVID-19 lockdown, short and local livestock value chains remained relatively unscathed, while production systems depending on international inputs or on global markets for their output were heavily impacted and faltered. This was the message that came out loud and clear from the satellite regional meetings which preceded the latest meeting of the Global Agenda for Sustainable Livestock (GASL), a multi-stakeholder platform administered by the UN Food and Agriculture Organization (FAO), which was held in early September and centred on the impact of COVID-19 on the livestock sector. Furthermore, East Africa, West Africa and South/East Asia reported that pastoralism and local breeds had done remarkably well.

These observations underline the vulnerability of global livestock value chains and should urge us to restructure the livestock sector towards more reliance on local resources. What are the principles of resilient livestock economies that minimise the risk of disease outbreaks, including zoonoses, and that can both prevent and withstand such catastrophic events as the ones we are experiencing in 2020?

The advantages of local breeds

A resilient livestock sector begins with indigenous breeds that are adapted to local climatic and ecological conditions. These animals may have less output than the high-yielding breeds that have been promoted so heavily in recent years but they bear the huge advantage of being able to sustain themselves on locally available feed. They are not dependent on the obtainability of concentrate and feed mixtures whose supply may be interrupted. In case of feed shortages, they can even slow down their metabolic rate and ride out the crisis, as they have been selected for coping with such events for hundreds of years.

Indigenous breeds are resistant to diseases. Consider the Nari cattle, a long-horned dual-purpose breed from the Thar Desert in Rajasthan/India. Their breeders, the Raika pastoralists, profess that this breed does not suffer from any diseases whatsoever. Only when prodded repeatedly do they admit that their Nari cows might be affected by Foot and Mouth disease, but only in a very mild form that does not require any treatment.

By contrast, the improved breeds are much more susceptible to diseases. They are genetically programmed for quick growth or for yielding enormous output. As all their energy is channelled into meat, milk and egg production, they have no ‘bandwidth’ left to resist diseases. They cannot slow down their metabolism, and if their regular supply of high-quality feed is disrupted, they stop producing and perish.

The animals that are raised for meat production in industrial systems have to be slaughtered at a pre-ordained age for value chains to function. Broilers not culled at the right age put on so much weight that their legs can no longer carry them, while pigs become too big to fit into the standardised slaughtering processes. Having been intensively selected for maximum yields, the animals bred for such systems are genetically very homogeneous, and this creates ideal conditions for viruses to increase their potency.
By contrast, in pastoralist systems, herds consist not only of very disease-resistant animals, but are genetically diverse. As a risk minimising strategy, their owners purposefully strive for diversity in their holdings. They select for a large number of traits, including the ability to walk, obedience and maternal instincts that are not considered in scientific breeding programmes. Because of this genetic diversity, their animals make it much more difficult for viruses to spread, infect and multiply.

Another dangerous aspect of maintaining large numbers of high-yielding animals is that they tend to require frequent, or even routine, dosing with antibiotics to keep infections at bay. This in turns promotes antimicrobial resistance (AMR), culminating in the emergence of superbugs that cannot be controlled with existing drugs.

Disease-causing organisms, whether viruses or bacteria, have a field day where large numbers of animals are kept together in tight spaces. They really have a walk-over when the immune system of livestock is compromised, as happens in industrial systems where animals have no opportunity for physical exercise and are stressed from being crowded together.

At the other end of the livestock production system, in pastoralist systems, movement and dispersal are inherent characteristics. In order to harvest scattered biomass, the animals have to walk and disperse. As research by animal nutritionists has shown, on their daily grazing rounds, they select their own individual ‘menus’ which differ seasonally. Having plants to choose from stimulates their appetites and reduces stress caused by boredom.

Of course, conditions for pastoralism do not exist everywhere, but providing animals the opportunity to move already helps. Nor are pastoralist herds free of diseases – latent infections with brucellosis and tuberculosis are to be reckoned with. But because animals are resilient and genetically more diverse, they present much less of a breeding ground for viruses and other disease-causing organisms.

Networks of smallholder farms keeping a limited number of animals belonging to local breeds have much to recommend them epidemiologically over large holdings of genetically identical animals. This would pertain to regions such as Southeast Asia, from which many dangerous epidemics such as avian influenza, swine flu and Nipah virus have emerged. Researchers attribute this to its transition from smallholder poultry and pig farming to industrial production. The exponential growth of the livestock sector here was made possible by a concurrent rise in feed imports. Take Vietnam as an example: Over the last 20 years, its feed imports grew from less than 1 million tons/year to 26 million tons/year. Corn and soy beans are grown in gigantic monocultures in one part of the world (the Americas) and then shipped to industrial livestock production units in Europe and Southeast Asia, where high-yielding animals transform it into meat, eggs and milk. This has increased the size and density of livestock holdings, creating ideal conditions for disease outbreaks.

Over the last several decades, smaller slaughter houses and dairies in North America and Europe have been eliminated to the extent that only a very limited number of giant processing units are now in operation. This set-up has been our undoing during the COVID-19 crisis. The cramped working conditions and humidity in slaughterhouses made workers prone to infection and led to the closure of many such facilities. As a result, millions of animals could not be slaughtered at the time they were meant to be and had to be ‘euthanised’ and disposed of in landfills. By contrast, the village-based slaughtering systems in countries such as India, where animals are slaughtered on demand, were not at all impacted.

If we want to foster resilient food production, we need to invest into networks of small processing units, be it dairies or slaughter houses. Such investment would create local jobs as well as bring gains in terms of animal welfare and reduce the use of fossil fuels by avoiding long transportation.

For a One Health approach, it is necessary to look not only at the quantity but also at the quality of livestock products, including their nutritional density. Fast-growing and high-yielding animals have higher water contents in their meat and milk. Livestock diets influence other aspects of their products as well, such as composition of saturated versus unsaturated fatty acids. Animals that are fed on concentrate produce different products than those feeding on a bio-diverse diet with health-enhancing phytochemicals, which are non-nutritive components present in plants that influence our body processes and can protect us from diseases, such as heart problems and even cancer. There are at least a thousand different phytochemicals, and so far only a few of them have been explored. The lack of such micro-nutrients and certain trace elements in fast-grown food makes it less satiating and therefore leads to overconsumption and obesity.

Resilience, conservation of biodiversity, rural livelihoods and high quality, tasty food are all part of the same package. Our drive for livestock efficiency has resulted in high yielding, but sensitive breeds, large livestock holdings but elimination of local livelihoods, over-supply of cheap meat and dairy, but loss of nutritional density and taste.

We can reverse the trend by creating decentralised value chains that build on local breeds and networks of small processing units. This is also the approach taken for camel dairy development in Rajasthan/India by the NGO Lokhit Pashu-Palak Sansthan (LPPS) and the local Camel Breeders Association. According to local knowledge, camels feed on 36 ayurvedic plants which makes their milk especially healthy. So with support from two NGOs in Germany (Misereror and the League for Pastoral Peoples), an effort has been on since 2016 to maintain the traditional nomadic system, rather than go for stall-feeding, and enable milk collection through a network of micro-dairies set up in the camel breeding area. This will ensure that the milk retains its much sought after health-enhancing qualities, the camels are kept happy in a herding system, the camel breeding community retains its livelihoods, and the landscape and its tourism value is enhanced by the presence of camels. It is a win-win situation for people, animals and the environment and personifies the One Health approach.

Ilse Köhler-Rollefson is a German veterinarian who has been based in India for the last 30 years. She is co-founder of the League for Pastoral Peoples and consults widely for FAO and other UN agencies.
Contact: ilse.koehlerroll@googlemail.com