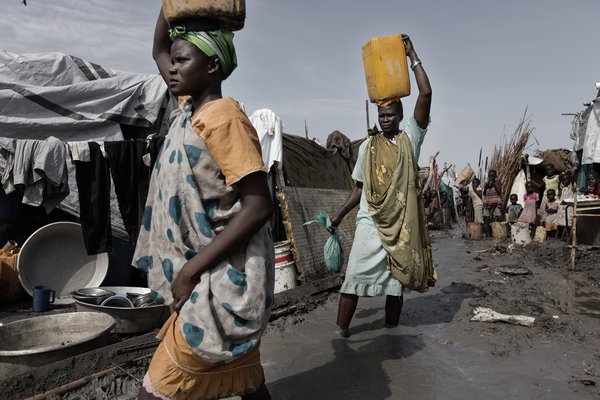 Women in a refugee camp in Malakal in South Sudan.
Photo: © Welthungerhilfe/Rosenthal

Help where politics has failed

Humanitarian crises are also playing an increasingly important role in the activities of Welthungerhilfe. Presenting the 2014 Annual Report, the organisation’s President, Bärbel Dieckmann, called for greater political influence in the crisis regions in order to give people there a long-term perspective.

Welthungerhilfe is becoming increasingly involved in countries hit by humanitarian crises. A major share of project funds flowed into countries like Syria, South Sudan, Congo and the Central African Republic last year. “More and more often, we have to take action where politics has failed,” said Welthungerhilfe President Bärbel Dieckmann, presenting the Welthungerhilfe Annual Report 2014 in Berlin, Germany. "But considering the complexity of conflicts nowadays, political influence is needed to give the people affected prospects for the future.”

With a total of 30 million euros, Syria was the country receiving the largest amount of project funding last year. “There, we are witnessing the most extensive displacement of people and the biggest humanitarian crisis in post-war times,” Dieckmann maintains. “This crisis is going to stay with us for years.” The latest United Nations estimates put the number of people now requiring survival aid in the country at around 12.2 million people. About two thirds of the inhabitants – there was a population of 18 million before the civil war started – have been internally displaced, while five million people have fled to neighbouring countries, 17 million of them (officially) to Turkey. Welthungerhilfe assumes that the country has lost 30 years of development; over the last five years, average life expectancy has dropped by 20 years.

The situation is hardly more encouraging in South Sudan. In this country, where, after decades of civil war, political events are now being dominated by a power struggle between different ethnic groups, 90 per cent of the population are living below the poverty line. Around 2.1 million people have been driven away from their homes, more than half a million of them to neighbouring countries. Experts are reckoning with about 4.6 million people being affected by food insecurity, which would amount to 40 per cent of the population. In 2014, Welthungerhilfe was active in the country with a project volume of 16 million euros.

Last year, Welthungerhilfe ran a total of 385 overseas projects in 41 countries, reaching out to 12.7 people. At 120.4 million euros, around two thirds of the funds flowed into projects in Africa, and 51.6 million euros to Asia. Projects in Latin America/the Caribbean were supported with 7.6 million euros; here, activities focused on the reconstruction and rehabilitation programme after the earthquake in Haiti.

At more than 70 million euros (just under 40 per cent of funding), “Rural and Regional Development” was the most imported funding area. Increased activity in countries with armed conflicts has also lent more importance to emergency relief projects, which were supported with a volume of 65.3 million euros.