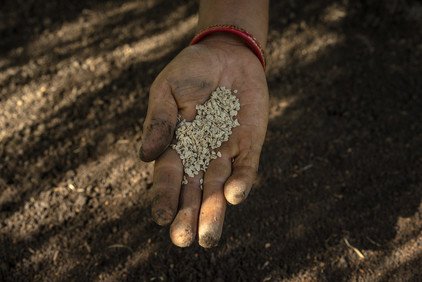 A farmer holding a handful of tomato seeds. Small-scale farmers in developing countries could suffer particularly from concentration of market power in the seed market.
Photo: ©IFAD/Sanjit Das/Panos

Growing concentration in the seed market

If all three planned mergers in the seed market come to fruition, the new major corporations would have a dominant market share, giving them great influence on the structure of the agricultural and food system.

The mergers of Dow-DuPont and ChemChina-Syngenta and the planned takeover of the US Monsanto group by Bayer could mean that three megacorporations would in future control almost two-thirds of the worldwide market for seed and agricultural chemicals. This would give them great influence on the living and working conditions and on the food of billions of people.

In a public letter to the European Commission in March 2017, almost 200 NGOs warn that the three resulting corporation groups would control some 70 per cent of the world agricultural chemicals market and over 60 per cent of the seed market.

The NGOs fear that less competition and greater market domination would further reduce the diversity of the available seed. Farmers’ options in choosing seed and their right to replicate and further develop their own seed could be infringed, and their dependency on chemical inputs increased.

The three major corporations could expand control of intellectual property rights, force out remaining smaller seed companies and increase prices to farmers – all of which would have adverse consequences for the local economy and smaller food companies.

Small-scale farmers in developing countries in particular would suffer from price increases, limited choice of seed and pesticides and injury to health from the use of agricultural chemicals. According to FIAN, small-scale farmers currently produce 80 per cent of food worldwide.

The NGOs warn that the consequences of a concentration of power could hinder achievement of the UN Sustainable Development Goals, and particularly the second goal: “End hunger, achieve food security and improved nutrition and promote sustainable agriculture”