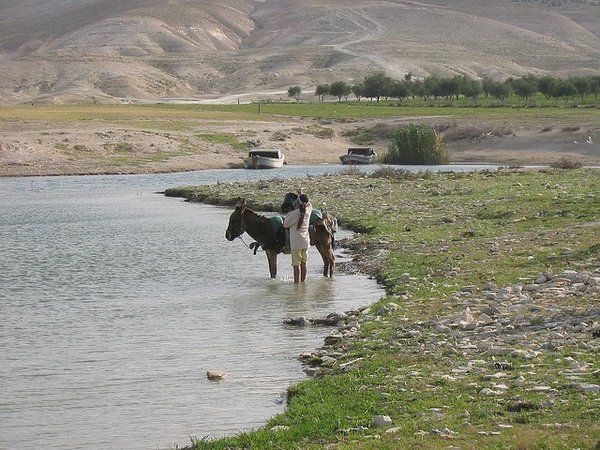 A girl taking water from Lake Assad, a reservoir on the Euphrates River in Ar-Raqqah Governorate, Syria.
Photo: flickr.com

Grim prospects for the “cradle of agriculture”

Mesopotamia has seen seven thousand years of sustainable agriculture. But now, steeped in war and suffering from environmental hazards and climate change, the region could be facing a bleak future. “What will happen is that agriculture is going to die in the land where it was born,” says Azzam Alwash, an Iraqi hydraulic engineer and environmentalist, and founder of the “Nature Iraq” NGO. Alwash won the prestigious Goldman Environmental Prize in 2014 for his efforts in restoring southern Iraq’s salt marshes, an area drained by Saddam Hussein’s regime in a bid to quell the resistance of the Marsh Arabs and prevent dissidents from seeking refuge in the reeds.

Alwash maintains that the new Illisu dam represents a major threat to Iraq’s agriculture. It is one of 22 water barriers in south-eastern Turkey, the area which the region’s two main rivers, the Euphrates and the Tigris, originate from, fed mainly by rainfall and melting snow. Much of this water is now filling up the Illisu reservoir, and increasing amounts are also being used for irrigation, reducing the flow in the Iraqi section of the Tigris. The decline in water supply prompted Iraq and Islamic State (IS) to lodge complaints with Turkey, although Alwash notes that IS itself has been “wreaking havoc with the water of the Euphrates”.

Water as a weapon

Explaining the role of water for IS, Tobias von Lossow of the German Institute for International and Security Affairs (SWP) states that it is now in control of various strategically important water resources in Iraq and Syria and has also used water as a weapon to subdue the population and blackmail it into support. For example, in 2014, it closed the locks of the Falluja dam in central Iraq and used an irrigation canal to have the city of Abu Ghraib standing four metres deep in water. Nearly 10,000 houses and 200 square kilometres of farmland as well as an entire harvest were destroyed in the region, and up to 60,000 people were forced to flee. In eastern Iraq, IS contaminated water with crude oil, and similar methods were employed in Bagdad and cities in Syria. Flooding and damming was also applied to stop advancing enemy troops or create access to the enemy.

Von Lossow paints an apocalyptic scenario for the region should IS be forced to beat a full retreat. He warns that in a last ditch attempt to demonstrate its power, the organisation could resort to blasting the major dams in Iraq, which would flood vast areas and kill hundreds of thousands. However, if IS does not want to lose its credibility in terms of establishing a caliphate, an Islamic state, it has to carefully dose such measures to ensure that the population it seeks to garner support from are supplied with essentials like water and hydropower. Moreover, von Lossow argues, water plays a key role in the IS economy, not only via revenue from water rates but also in processing crude oil, one of the militia’s most valuable assets.

Alwash explains that crop-growing in Iraq used to rely on an abundance of water. Up to 1980, flood control had always been the big challenge, and he believes that this was also the reason why agriculture was “invented” there so long ago. But then Turkey started building the dams harnessing the water of the Tigris and the Euphrates, putting an end to the floods. Iraq relies on rain falling outside its borders for more than half of its water. According to the United Nations Food and Agriculture Organization (FAO), climate change and water storage projects in Turkey, Syria and Iran have already caused discharge rates in the Euphrates and the Tigris to fall to less than a third of normal capacity, and they are set to drop further in coming years.

Salinity has long been underestimated

Alwash has advised the Iraqi government to help farmers switch to more suitable ways of irrigation and agriculture to limit water wastage, and he recommends that farmers plant vegetables since they need less water than crops like wheat, barley or rice. However, this can only be part of the solution to the crisis agriculture is facing.

“The biggest problem is the increased salinity of the Tigris and the Euphrates,” Alwash maintains, complaining that scientists have so far given this aspect little attention. He explains that more land traditionally fed with rainwater is now being irrigated, causing irrigation salinity. In 2014, water salinity where the Euphrates enters Iraq was already 1,200 parts per million higher than the 1,000 parts per million prescribed by the World Health Organization (WHO) for safe drinking water. “Just imagine the salinity by the time the water gets to the southern Iraqi city of Nasriyah,” Alwash comments.

Together with the devastation caused by IS and other armed conflicts, the combined effect of climate change and the rise in saline groundwater looks set to drive a country into further ruin which could be the “breadbasket for the entire region” according to Alwash. He sees practical solutions such as Iraq providing Turkey with oil and gas in exchange for water and even a “friendship treaty” with Turkey and Iran, brokered by the USA, as possible options. But various agreements between the governments of Turkey, Iraq and Syria in the past have so far failed to take effect. And being at the source of Mesopotamia’s two rivers, Turkey holds the reins in the area.