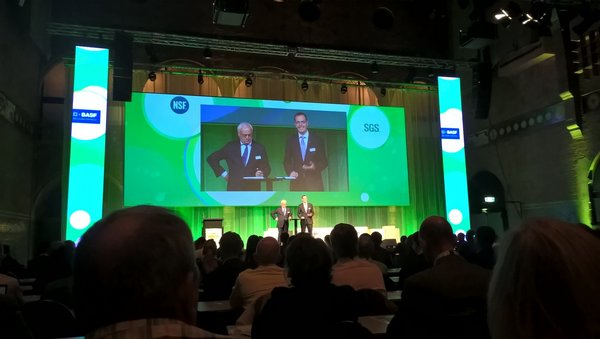 (v.l.n.r.) : Guy Callebaut, Chairman, GLOBALG.A.P. Board, and Kristian Moeller, CEO, GLOBALG.A.P at the opening session of the summit in Amsterdam.
Photo: © FriederikeMartin

GlobalG.A.P.: Food safety on the rise

The GlobalG.A.P. Standard invited to its bi-yearly summit in Amsterdam to celebrate 20 years of GlobalG.A.P. Partnership and 15 years of good agricultural practices certification.

Since 1999, GlobalG.A.P. has organised a bi-yearly summit for its members to present the latest developments in food safety and sustainability as well as good agriculture and aquaculture practices. This year’s summit was under the scope of its twentieth anniversary, and thus the focus was on the achieved results as well as the future vision and mission of quality assurance and certification of good agricultural practice.

GlobalG.A.P. is a voluntary business-to-business standard with a focus on safe and sustainable agriculture.  In 2015, it had 399 members and more than 160,000 certified producers.

The Summit went for 1.5 days and covered topics such as climate resilient future, using big data in certification, the metrics of improvement and how to bring governments on board.

GlobalG.A.P. has announced that it is planning to align its work more closely to the United Nations’ Sustainable Development Goals. In order to tackle environmental and social challenges in the supply chains, GlobalG.A.P. members are able to design and implement add-ons on climate relevant issues to the general GlobalG.A.P. Standards, such as coop, one of the largest Swiss retail companies, who have introduced an add-on to support producers in improving their water management and resilience to climate change.

Trust in food safety by the consumer remains a top priority and was identified as the core competence of the GlobalG.A.P. Standard. However, social and environmental standards have received much more attention over the last few years. An analysis of the impact of the GlobalG.A.P. social standards (GRASP) shows that incomes of certified farmers have increased, working hours have been reduced, and the relationship between the management and the workers has improved. At the same time, however, the administrative costs of monitoring compliance with the standards have risen. These increased costs have often been attributed to the incomes and wages of workers and farmers, among whom they have ultimately led to a reduction of incomes in several cases.

The benefits of compliance with social standards need to be further developed and propagated among the producers. The interest of a stronger integration of social standards, especially regarding the topic of child labour and income-securing income, were expressed by many members. In addition, it was pointed out that GlobalG.A.P. should focus on its core competences in food safety and seek strong partners for compliance with social standards. Above all, the GlobalG.A.P. Standards need to remain accessible and affordable for the producers.

The future role of “big data”

Another important subject during the summit was the topic ‘big data’ and digital disruption. Technologies are going to play a major role in future food security, and big data will help to make processes more transparent and efficient. This is also likely to change the auditor's activities and reduce the price of certification. Data management systems are expected to simplify farm management and farm examinations. While at this point in time, it is not clear what all this data can be used for, it would also be important to push the debate towards the question which data will provide relevant information rather than just collecting any data.