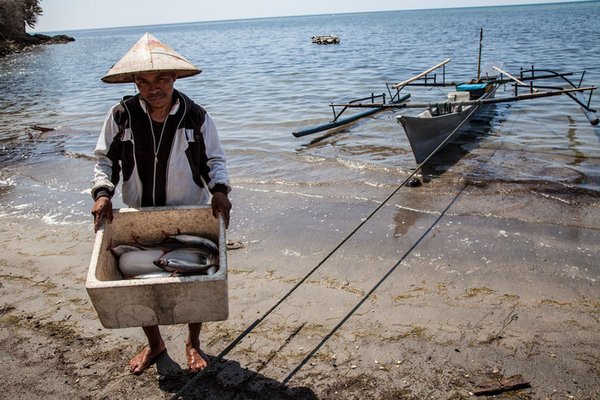 Global warming is destroying fish stocks in the Pacific

As global warming proceeds, the catches of fishers in the Pacific are falling drastically. Even if the Paris Agreement is complied with and average global warming does not exceed 2°C, fish catches will decline – although much less so than if warming exceeds 3.5°C.

A year ago, nations agreed in Paris to do their utmost to limit global warming to significantly below 2°C, compared to levels before the industrial revolution. Ideally, average temperatures globally should not increase more than 1.5°C.

Scientists at the ETH Zurich and the University of British Columbia have now applied the Paris climate goals to a concrete example, global fishing. This shows what the goals could mean for this important industry.

According to the researchers’ calculations, fishing would benefit enormously if average global warming stays below 2°C. The potential maximum catch is roughly 3% higher for each degree of reduction in warming (based on the FAO’s calculated global catch of around 88 million tons in 2014).

The researchers also predict that the tropical Pacific in particular will benefit from compliance with the Paris Agreement, as catches there will drop by 12% even if the 1.5°C goal is met, while they will fall by 47% if warming exceeds 3.5°C.

Tropical fish, which currently live in regions with water temperatures between 27-29°C will in future face water up to 2°C, depending on the climate scenario. However, many species are unable to adapt to this change, not least because warm water contains less oxygen, with the result that they will have seek new living areas in cooler waters.

Nordic fishers could increase their catch temporarily by one-fifth for each additional degree. This is because warming has a positive effect on fishing in the Arctic, as the disappearing sea ice allows more light (and heat) to reach the ocean, encouraging the growth of vegetable plankton. The result is an increase in fish stocks, which in any case also benefit from the invasion of species of fish from warmer latitudes.

If the Paris goal of 1.5°C is met, Arctic fishers would increase their catch by 30%, rising to 55% for 3.5°C. However, after a given point the system will flip, and warming will have a negative impact on the Arctic Ocean. For example, an increase of over 3.5°C in average temperatures will lead to a decline in fish stocks in the North Sea, as higher water temperatures will lead to greater stability of the ocean layers, with lower growth in vegetable plankton.