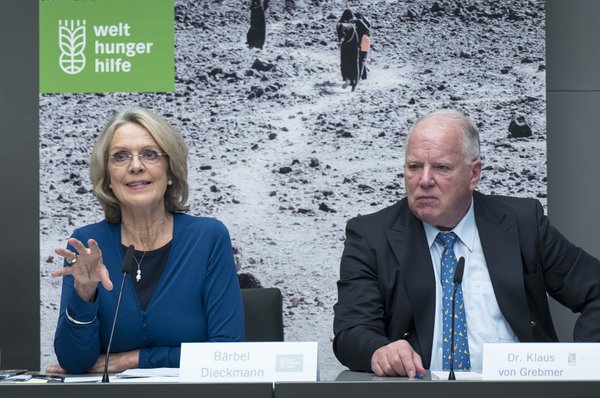 Global Hunger Index 2017 casts light on the inequality of hunger

Progress has been made in combating hunger. However, some of it is being nullified again by wars and the impact of climate change. And also by inequality, which is tending to rise rather than to decline in many world regions. This is demonstrated in the Global Hunger Index (GHI) 2017, which was presented by Welthungerhilfe and the International Food Policy Research Institute to mark World Food Day in Berlin, Germany.

As in past years, the Global Hunger Index has good news and bad news. The good news is that progress has been made in reducing hunger world-wide. Global hunger levels have fallen by more than a quarter since 2000. The bad news is that more recent rising hunger scores of several countries underline how uneven this progress has been and how precarious it is to maintain. Largely, this is owing to wars and the impact of climate change, but also to inequality in living conditions. And if no substantial progress was made in combating hunger, the goal of zero hunger that the international community of states had set itself for 2030 would not be attained, said Klaus von Grebmer of the International Food Policy Research Institute (IFPRI) presenting what is now the 12th Global Hunger Index (GHI) in Berlin/Germany in mid-October.

The level of hunger in developing countries had decreased by 27 per cent since 2000. During the same period, GHI scores (see Box) of 14 countries, including Azerbaijan, Brazil, Senegal, China, Panama and Peru, had improved by 50 per cent or more. Angola, Ethiopia and Rwanda – each experienced violent conflict in recent decades – were among 72 countries which had improved their GHI scores between 25 and 49.9 per cent, making progress from “extremely alarming” levels to “serious levels”.

However, declines in average hunger at the regional or national levels obscure some grim realities. Nowhere is this more evident than in Africa South of the Sahara, where revised data place the Central African Republic in the “extremely alarming” category – the first time a developing country has fallen into the report’s highest category since the 2014 report. The country has the same score today as it did in 2000, suggesting any progress made in recent years has been subsequently reversed. Several other countries, including Sri Lanka, Mauritania, and Venezuela, also have higher GHI scores in 2017 than in 2008, after witnessing falling scores in the previous two decades.

The averages can mask lagging areas where millions are still hungry, demonstrating the need to hold governments accountable not only for investments in timely data but also for building resilience in communities at risk for disruption to their food systems from weather shocks or conflict, the report states.

The Near East region, for example, has an average score at a “moderate” hunger level, but there are deep inequities within the region.  At an “alarming” 36.1, Yemen, for example, has the sixth highest GHI score. Other places highlight inequality within countries. In Nigeria, an overall hunger level at a “serious” 25.5 does not fully reflect the wide inequality within its borders: child stunting – an indicator of child undernutrition – ranges from 7.6 per cent to 63.4 per cent by region. And Latin America’s ‘low‘ hunger scores do not tell the story of Venezuela, where political turmoil and ensuing food riots caused hunger to rise by 40 per cent from 2008 levels, pushing the country into “moderate” from “low” levels of hunger.

“World-wide, we are witnessing glaring injustice as far as the distribution of opportunities in life and income is concerned,” said Welthungerhilfe President Bärbel Dieckmann at the presentation of the report. “The ‘poor remain poor, rich become richer’ cycle has to be interrupted.” Dieckmann referred  to the example of India, a country in which there is considerable wealth on the one hand and 200 million people are going hungry on the other.

The Welthungerhilfe President stressed the importance of education as a core element in combating inequality. Basic social security systems and fair economic and tax systems were just as important as the establishment of equality of men and women in issues such as inheritance law, co-determination and participation – especially in Africa. Dieckmann also reminded those present that by 2050, 150 million young people would be entering the labour market in Africa. “We need a competitive economy at local level that can absorb these young people,” Dieckmann stressed. This also required that the local value chains had to be further developed. In addition, smallholders had to have the opportunity to stay in farming.

The authors of the GHI 2015 had already pointed out the link between hunger and armed conflicts. “A famine among children is looming on the horizon in Mali. The early warning system has already been sounding the alarm for around a year, but even so, nothing is happening,” von Grebmer and Dieckmann declared unanimously. Left to their own devices, many countries could not act. It was all the more important to draw attention to the crisis situation in public again and again, in order to thus force the international community of states to take action.

The GHI ranks countries based on four key indicators: undernourishment, child mortality, child wasting and child stunting. The 2017 report ranked 119 countries in the developing world, nearly half of which have “extremely alarming” (1), “alarming” (7) or “serious” (44) hunger levels.

The average GHI score for the developing world is 21.8, which is in the low end of the “serious” category. Regionally, South Asia (30.9) has the highest levels of hunger, followed closely by Africa South of the Sahara (29.4). Of the countries for which scores could be calculated, the top 10 countries with the highest level of hunger are Central African Republic, Chad, Sierra Leone, Madagascar, Zambia, Yemen, Sudan, Liberia, Niger and Timor-Leste.

Roughly half of the populations of Central African Republic, Haiti and Zambia are undernourished –the highest in the report. In South Sudan, Djibouti, India and Sri Lanka, one-fifth to one quarter of the children under five weigh too little for their height due to nutritional deficiencies. More than half of children under age five are too short for their age in Burundi, Eritrea and Timor-Leste. In Angola, 15 out of every 100 children do not survive beyond the age of five.

Efforts to reduce malnutrition and end hunger are marred by lack of complete data for calculating index scores for 13 countries. Yet the countries with missing data may be the ones suffering most. Nine of these countries have indicators like stunting, wasting and child mortality that raise significant concern for having high hunger levels. Two of them (South Sudan and Somalia) were included in the UN’s declaration of famine and warning of risk of famine. Ongoing conflicts in many of these countries were a factor inhibiting the collection of data necessary for calculating GHI scores.