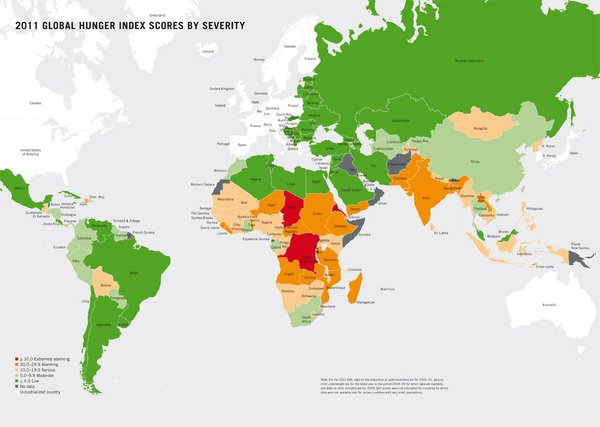 As the hunger crisis in the Horn of Africa has demonstrated this year, food security continues to be threatened for millions of people throughout the world, a trend that is reflected in the Global Hunger Index (GHI) 2011. This is the sixth time that the GHI has been published jointly by Welthungerhilfe (WHH), the International Food Policy Research Institute (IFPRI) and Concern Worldwide. The GHI is a multidimensional tool for calculating the global hunger situation. By raising awareness and understanding of regional and country differences in hunger, the GHI aims to trigger actions to reduce hunger.

Although the global GHI score has dropped by more than a quarter since 1990, now, in 2011, there are still 26 countries in which the hunger situation is referred to as alarming or even extremely alarming (see chart). The countries with the poorest hunger scores all lie in sub-Saharan Africa: the Democratic Republic of Congo, Burundi, Eritrea and Chad.

Among the countries with the worst GHI scores, the Democratic Republic of Congo stands out. Not only has the country scored the highest GHI value of all countries in 2011, but it has also had to accept the clearest worsening of the hunger situation since 1990 and has therefore been the only country to slip down from the category “alarming” to the poorest category, “extremely alarming”. The country has recorded the largest share of undernourished people (70 percent) and one of the highest child mortality rates world-wide.
A positive example from this region is Ghana. During John Kufuor’s period of office, the government’s investment in agriculture, rural development, education and health enabled Ghana to officially join the medium-income countries in 2007 and figure among sub-Saharan Africa’s politically most stable countries and fastest growing economies. The region with the poorest GHI score world-wide in 2011 is, once again, South Asia. The low status of women in the region is one of the primary factors contributing to a persistently high prevalence of child undernutrition, which in turn has impeded progress in reducing GHI scores. In this region, the trend is chiefly determined by India, by far the largest country in South Asia.

As was already the case in 2007/08, it is once again the rising and increasingly volatile food prices that are threatening food security for many people in developing countries. The Global Hunger Index refers to three key factors that are crucial in this context: increasing use of food crops for biofuels, extreme weather events and climate change, and increased volume of trading in commodity futures markets. In order to counter a deterioration of the global hunger situation, the reasons for rising and more volatile food prices have to be combated while people in developing countries also need to be supported in adapting to the new situation.