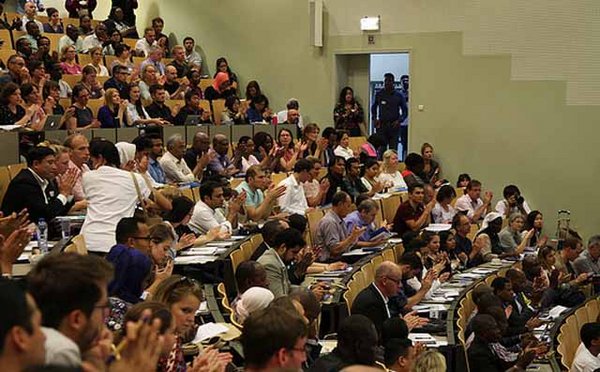 Global food security and food safety – the role of universities

The 20th Tropentag took place at the University of Ghent in Belgium in mid- September. The Tropentag is an annual interdisciplinary conference on research in tropical and subtropical agriculture, natural resource management and rural development conference hosted by a European agricultural university.

Around 630 participants, 59 countries, 320 posters and 80 presentations in three days – this year’s Tropentag, the 20th event of its kind, was organised by the University of Ghent in close co-operation with the Catholic University of Leuven (KU Leuven) and the University of Antwerp University, all of them in Belgium, and took place in Ghent in September. The international conference of agricultural researchers was entitled “Global food security and food safety: the role of universities”.

Nowadays, 35 billion US dollars is spent each year on food imports to Africa. According to UN Food and Agriculture Organization (FAO), this sum is set to rise to 110 billion US dollars by 2025, depending on Africa’s population growth. In this context, food security and safety will become more and more relevant. The current research focus to tackle this development lies on youth and jobs, trade, dietary transition, as well as private sector and agribusiness.

Franҫois Stepman of the Platform for African, European Partnership in Agricultural Research for Development (PAEPARD), Belgium, remarked that that the Tropentag provided a unique venue for companies, NGOs and research institutions to discuss the impacts of research findings on policy-making.

Emile Frison, IPES Food, Italy, opted for agroecological farming. Productivity would remain the same, and income would increase, while resilience and ecological stability levels would triple compared to the baseline scenario, Frison stated.

Do we need more drought for better nutrition?

The session "soil and soil fertility" included a presentation from the project Healthy Land with the controversial research title Do we need more drought for better nutrition? – Water stress on nutrient content of food. Thomas Hilger (University of Hohenheim/ Germany) pointed out that with increasing extreme weather events, sudden drought periods could affect plant growth, bioavailability of nutrients and the quality of produced food. The study was conducted in 2016 in two regions in East Africa (Kapchorwa, Uganda and Busia, Kenya) in order to identify whether droughts have an impact on the nutrient composition of food produce.

Land degradation and livelihoods for the Sahel

The Sahel region faces the highest population growth in Africa with a growth rate of three per cent. In addition to human population growth, livestock numbers are on the increase, leading to overgrazing and land degradation in the long run. Keynote speaker Barron Orr of the United Nations Convention to Combat Desertification (UNCCD) presented the Land Degradation Neutrality (LDN) scheme. Orr explained that human wellbeing, food security and healthy ecosystems could be better configured through a system approach that could be applied to carbon and biodiversity, although not to land degradation. Monitoring LDN at global level comprises land cover, land productivity and soil organic carbon complemented by locally relevant indicators as well as process and outcome indicators. Furthermore, LDN was central to achieving Sustainable Development Goal target 15.3, Life on Land, Orr said.

Emmanual Olatunbosun Benjamin of the Technical University of Munich presented his findings on a public-private co-operation in extension services and its impact on agricultural development in Nigeria. Fertiliser use in Nigeria was 7 kg/ha, while in other Sahel countries, it amounted to 30 kg/ha. In 2011, the Nigerian government introduced e-vouchers for mobile phones enabling the farmers in remote areas to receive subsidies for fertiliser directly. The e-voucher system substantially increased fertiliser application nation-wide.

Science networking – the role of universities

The co-production and sharing of knowledge is an important approach to create awareness, improve social-economic conditions and find appropriate technologies in different places. The challenges and barriers are numerous, as Kristina Roesel of the International Livestock Research Institute in Kenya emphasised: long distances, difficulty of communication, poor infrastructure and cultural differences. All of these make university partnerships a complex task.

These programmes show how to find effective solutions to complex interdisciplinary problems. Camilla Adelle of the Centre of Excellence for Food Security at the University of Pretoria, South Africa, stressed the role of academics in such processes. “The gains are surely brighter, and the fruits harvested at the end of this hard work are singularly tasteful,” Adelle noted. “Continued research with a strong basis and efforts on both sides can lead to the development of important capacities – it is not just important, but imperative.”

The next Tropentag takes place in Kassel (18th to 20th September 2019), co-organised by the Universities of Kassel and Göttingen in Germany, and is to focus on “Filling gaps and removing traps for sustainable resources management”.

The Tropentag is a development-oriented and interdisciplinary conference addressing issues of resource management, environment, agriculture, forestry, fisheries, food, nutrition and related sciences in the context of rural development, sustainable resource use and poverty alleviation world-wide.

The Tropentag is jointly organised by the German universities of Berlin, Bonn, Göttingen, Hohenheim, Kassel-Witzenhausen and Hamburg, as well as ZALF e.V., ETH Zurich (Switzerland), the Czech University of Life Sciences Prague (Czech Republic), the University of Natural Resources and Life Sciences Vienna (Austria) and the Council for Tropical and Subtropical Research (ATSAF e.V.), and in co-operation with the GIZ Advisory Service on Agricultural Research for Development (BEAF).