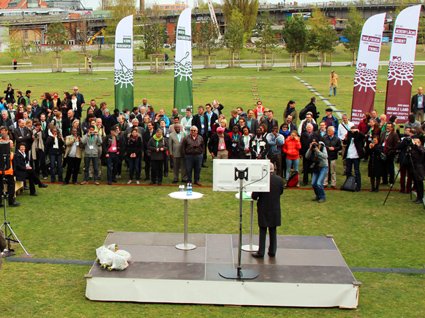 Awareness raising is key: Participants of the Global Soil Week at the opening of the "ONE HECTAR" exhibition in Berlin.
Photo: © IASS

Give soil a voice!

It remains a challenge to set the often forgotten resource soil on the political agenda. With the declaration of 2015 as the International Year of Soils, the United Nations has taken a step in this direction. In Berlin, Germany, the participants of the third Global Soil Week demonstrated the close links between soils, the Sustainable Development Goals and negotiations on climate change.

The third Global Soil Week, organised by the International Institute for Advanced Sustainability Studies – IASS (Potsdam/Germany) and partners, was held under the motto “Soil. The Substance for Transformation” in Berlin in late April 2015. More than 600 participants from 80 countries around the globe met to discuss ways to attain sustainable soil management and responsible land governance. Around 300 case studies on the topics of a “Land degradation neutral world”, “Land governance”, “Sustainable Land management and soil rehabilitation”, “Transformation through Transdisciplinarity?” and “Awareness raising and soil communication” were discussed.

SDGs put too much pressure on natural resources

The effectiveness and sustainability of the SDGs with regard to demands on natural resources formed a focal topic at the meeting. Twelve of the proposed SDGs address the sustainable use of natural resources, and several of them depend on the use of additional land resources, including the Goals regarding food security (Goal 2), energy supply (Goal 7), production and consumption (Goal 12) and sustainable use of ecosystems (Goal 15). “The 17 SDGs are inherently inconsistent. They put a much greater demand on biomass and soils than what is actually available,” IASS Executive Director Klaus Töpfer noted. Already, 12 per cent of Germany’s cropland is being used for biomass production, with a rising tendency. At the same time, every day, 70 hectares of soil is lost. Therefore, Töpfer believes that clear priorities have to be set in terms of the implementation of the SDGs, for example with regard to the goal of food security.

In his analysis of the economic interrelations, positive side-effects and conflicts of the 17 SDGs with regard to the land, food and water resources, Michael Obersteiner, Programme Director of Ecosystem Services and Management at the Austria-based International Institute for Applied Systems Analysis (IIASA), arrives at a similar result. “We are about to go beyond the planetary boundaries,” Obersteiner said. Referring to biodiversity, he added: “We do not know whether we have enough water resources to protect biodiversity globally.” For if more land is designated as nature reserves, the water demand for the irrigation of the available cropland will rise. Similar conflicts also apply to the production of biomass. And then there is the issue of food. As food production increases, pressure builds up on cropland, resulting in higher food prices and lower consumption.

To Ernst Ulrich von Weizsäcker, until recently Co-Chair and now a member of the International Resource Panel (IRP) of the United Nations Environment Programme (UNEP), divergent targets are an inbuilt feature of the system. “When it comes to the SDGs, it is only natural for the ecological goals to meet with firm limits, whereas the social and economic goals demand more and more growth.” Since the globe was finite, something had to change in terms of distribution. Sustainable consumption and sustainable production had to go hand in hand. The technological options to enhance resource efficiency were already there, such as better water management through drip irrigation. In the industrialised countries, it was above all vital to cut environmentally harmful subsidies, Mette Wilkie, Director of the UNEP Division of Environmental Policy Implementation, added. They were often several times higher than subsidies for sustainable land management, she criticised. While politically unpopular, a CO2 tax suggested itself as a very effective instrument.

IASS Executive Director Klaus Töpfer summed up the most important conclusions from the Global Soil Week at the end of the conference: