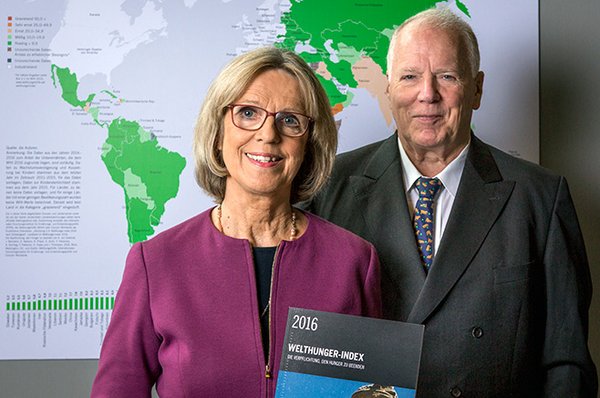 The 2016 Global Hunger Index report shows a decline in hunger levels across the developing world by 29 per cent since 2000. But if the international community fails to step up efforts to combat hunger, it won't reach the goal of zero hunger set in Agenda 2030.

Major steps forward have been taken worldwide in the fight against hunger. But the situation remains serious in 43 countries and even alarming in seven countries. If efforts to reduce hunger continue at the present pace, the “zero hunger” challenge enshrined in the Sustainable Development Goals will not be achieved. It would mean that, by 2030, the hunger situation in some forty countries will still be severe or alarming, as Klaus von Grebmer of the International Food Policy Research Institute (IFPRI) pointed out when presenting the latest GHI report in Berlin, Germany.

Taking the year 2000 as the baseline, this year's value for the overall level of hunger in the developing world (see Box) shows a 29 per cent decline (from 30.0 to 21.3). Twenty-two countries have even succeeded in reducing scores since 2000 by 50 per cent or more. They include Cambodia, Myanmar and Ruanda. Nevertheless, as many as 795 million people are still undernourished worldwide, and enormous differences exist between regions. In particular, there is ongoing concern about sub-Saharan Africa (GHI 30.1) and South Asia (GHI 29.0), where the hunger situation is rated “severe”. For East and Southeast Asia, the Middle East, North Africa, Latin America and the Caribbean as well as Eastern Europe and the Commonwealth of Independent States, the GHI values range between 7.8 and 12.8, signifying a hunger situation of “low” or “moderate”.

However, as von Grebmer explained, average hunger index values sometimes hide very substantial variations within a country. In Mexico, for example, the data gives an overall value for stunting among children under five of 13.6 per cent, yet in the southern state of Chiapas, with its high levels of food insecurity, inadequate sanitation and widespread disease, this figure stands at 31.4 per cent. Within Zambia and Sierra Leone – two countries that fall into the hunger category of “alarming” – we again find very wide variations in the scores for the individual GHI indicators.

Armed conflicts, natural disasters and poor governance are identified by the study's authors as key drivers of hunger. This becomes clear when we look at the two countries ranked at the very bottom of the scale: the Central African Republic and Chad. The Central African Republic (GHI: 46.1) has been afflicted by violence and mass displacement due to a four-year-long civil war, making it difficult to sustain food production there. In Chad (GHI: 44.3), which has also suffered long-running civil wars, the food security situation is exacerbated by an influx of refugees and extreme weather events. Other countries with hunger indicator values in the “alarming” range include Haiti (GHI 36.9), Madagascar (GHI 35.4) and Yemen (GHI 35.0). In addition, there are a number of countries that cannot be scored as part of the overall evaluation because the data is lacking – although we can assume in all these cases that the situation is alarming. In his presentation, von Grebmer referred to the case of Burundi, where stunting among children is put at 57.5 per cent, which is twice the average value for all children covered in the index.

“Too many people are still being left behind – above all women, children and people living in remote areas. If we want to achieve zero hunger by 2030, greater efforts must be made by actors in the fields of policy, business and civil society. It is above all essential that politicians in the countries affected show greater commitment. And we need more reliable data," concluded von Grebmer. According to IFPRI calculations, the scale of investment required to reach the 2030 zero hunger target would have to be around 60 billion US dollars a year.

In her speech, Welthungerhilfe President Bärbel Dieckmann raised the point once again that precisely those countries that cannot be included in the GHI ranking faced a disastrous situation due largely to violent conflict and poor governance – such as Libya, Somalia or Syria. “If we don't succeed in containing wars we won't eradicate hunger in the world,” said the Welthungerhilfe President. Some 65 million people currently faced displacement and, she noted, a large proportion of them were seeking refuge in neighbouring countries – countries which for the most part already had difficulties feeding their own population. “We have to give more support to these countries,” was Dieckmann's message. This support should include investment in agriculture, efforts to strengthen civil society and improvements to the education system. But, she said, the private sector also had an obligation to align investments in the relevant countries to the wellbeing of the people – and not focus exclusively on profit maximisation. Although exploitative raw material extraction had been criticised for decades, such practices remained a bitter reality in many countries of the South.

The Global Hunger Index (GHI), jointly published since 2006 by IFPRI, Concern Worldwide and Welthungerhilfe, ranks countries in accordance with a 100 point scale. Values up to 9.9 signify “low” levels of hunger, values from 10 “moderate”, values from 20 “serious”, values from 35 “alarming”, and values from 50 signify “extremely alarming” hunger. Four factors are fed into the index: the proportion of undernourished people as a percentage of the population, the proportion of children under the age of five who are wasted (that is, have low weight for their height, reflecting acute undernutrition), the proportion of children under the age of five who are stunted (that is, have low height for their age, reflecting chronic undernutrition) and the mortality rate of children under the age of five. The 2016 GHI has been calculated for 118 countries for which data on all four component indicators are available and where measuring hunger is considered most relevant. It presents data from 2010 to 2016. For some countries, such as Burundi, the Comoros, the Democratic Republic of the Congo, Eritrea, Papua New Guinea, South Sudan, and Syria, GHI scores could not be calculated due to lack of data.