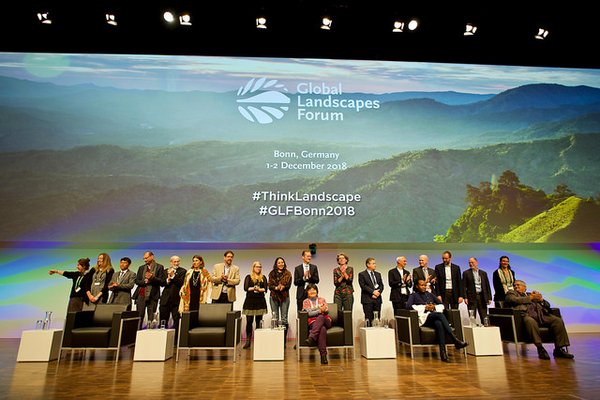 From commitment to action

For the second consecutive year, the Global Landscapes Forum has held its annual summit in Bonn, Germany. The event, held in early December, centred on accelerating action towards achieving major internationally agreed goals.

Landscape approaches are increasingly seen as a viable concept to reconcile socioeconomic with global environmental challenges. The Center for International Forestry Research (CIFOR) has defined ten principles characterising landscape approaches that refer to aspects such as adaptive management, clarifying rights and responsibilities, increasing the resilience of landscapes through recognising and reducing threats they are vulnerable to and a people-centred orientation in integrating agricultural and environmental priorities. CIFOR belongs to the CGIAR global partnership of research organisations focusing on reducing rural poverty and ensuring a sustainable management of natural resources. CIFOR is also the lead organiser of the Global Landscapes Forum (GLF), an international movement that centres on landscapes and the communities in them.

Under the motto “Connecting for impact – From commitment to action”, around a thousand participants from a wide range of areas, backgrounds and countries came to Bonn, Germany, in early December 2018 to discuss progress towards international agreements on climate change and other issues, while millions followed the event online world-wide.

Addressing the meeting, Stefan Schmitz, Deputy Director-General and Commissioner of the “One World – No Hunger” Initiative run by the German Federal Ministry for Economic Cooperation and Development (BMZ), highlighted the threat of land degradation and deforestation. Every minute, forest covering an area of 20 football pitches was lost. Forest loss accounted for eleven per cent of greenhouse gas emissions. Land productivity had seen a 20 per cent decline over the past 15 years, with small farmers bearing the brunt of degradation. Addressing land-use issues required an approach connecting ecological, socioeconomic and institutional issues, Schmitz concluded, backing the GLF approach. “Investing in rural development means investing in the future,” he noted.

While referring to the GLF as a master plan for sustainable development, Jochen Flasbarth, State Secretary at the German Federal Ministry of Environment, Nature Conservation, Building and Nuclear Safety (BMUB) warned that the world was still “galaxies away from sustainable development”, with the biggest problem, unsustainable land use, remaining un-tackled. Forty per cent of the world’s population were affected by land degradation, which itself was causing ten per cent of GHG emissions. Flasbarth complained that participants in international events had been experiencing “the same speeches, sentences and assessments” in what he referred to as a “lost decade for biodiversity”, and he proposed that the international community consider a “decade for ecosystem restoration”.

Indonesia’s Minister of Environment and Forestry, Siti Nurbaya, was able to report some progress made in restoring landscapes and rural livelihoods in her country. Efforts were being made to balance social issues with the environment, to move towards sustainable forest management and to align policies with international commitments regarding the environment. A peatlands restoration agency had been set up, and regulations were being imposed on the use of peatlands while their management was being entrusted more to the local communities, the aim being for locals to become economic actors.

“Degraded landscapes are plunging people into poverty,” Karin Kemper, Senior Director for the Environment and Natural Resources Global Practice at the World Bank, told the meeting. Kemper stressed that healthy landscapes were a vital prerequisite for achieving the World Bank’s goal of eliminating poverty by 2030. While natural capital formed the foundation of prosperity, it only represented nine per cent of wealth globally. The key to sustainable development was to develop human capital and decouple natural resource use from growth. Kemper warned that biodiversity loss was causing as great a danger as climate change. In particular, the world was heading for a collapse of its global insect population. It was therefore vital to focus on landscapes, which offered a key opportunity to bring about change.

In his keynote address, Yacouba Sawadogo, a farmer from Burkina Faso, told participants how he had combatted desertification by applying simple methods to keep rainwater from flowing away and using manure following a severe drought in the 1980s. Sawadogo, who received the Right Livelihood Award for his efforts to resist soil degradation, also started planting trees and has created an almost 40 hectare forest with a wide variety of trees and bushes on what used to be barren and abandoned land. Today, the farmer, who is also known as “The Man Who Stopped the Desert”, demonstrates to visitors how soil can be made fertile again.

Tony Rinaudo, a natural resources management specialist with World Vision, focused his keynote address on Farmer Managed Natural Regeneration (FMNR) of degraded soils and making use of things that were already in the ground. Rinaudo maintained that vast areas of unused land existed that contained living stumps, roots and other living material. Restoring vegetation cover in such areas was an approach that was now being adopted by millions and represented a low-cost, people-driven way to revitalise degraded land. FMNR has already proved to be a viable approach to raising food security in the Sahel region, and it is now being promoted in East Timor, Indonesia and Myanmar.

A wide range of issues were addressed in side-events held in parallel during the two-day meeting. For example, one session focused on sustainable wood energy production in Sub-Saharan Africa in the context of the Global Bioenergy Partnership, set up to promote bioenergy for sustainable development. Further topics featured at the meeting included youth involvement in landscapes initiatives, private-sector contributions to landscape restoration and sustainable trade.