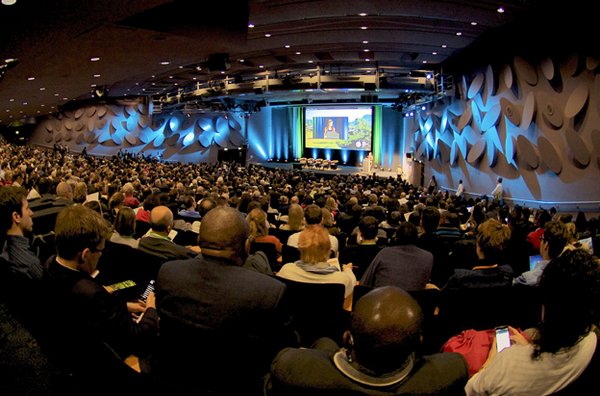 On the fringe of the World Climate Summit, stakeholders from different land-use sectors met in Paris at the Third Global Landscapes Forum to share knowledge and to find pathways towards sustainable land use.

Land use is one of the key sectors in achieving global climate and sustainability goals. On the fringe of the World Climate Summit, stakeholders from different land-use sectors met in Paris, France, early in December at the Third Global Landscapes Forum to share knowledge and to find pathways towards sustainable land use. The event was organised by the Center for International Forestry Research (CIFOR) and a consortium of partners who presented their initiatives on the panel and at thematic pavilions at the two-day meeting. In more than 30 plenary sessions and discussion forums, some 3,000 participants discussed four key areas related to an integrated land management approach: ‘Landscape restoration’, ‘Rights and tenure’, ‘Finance and trade’ and ‚Achieving climate and sustainable development goals’.

Who is under obligation to invest?“

Actually, we know what we have to do. Only doing it is difficult,” said Laura Tuck, Vice President for Sustainable Management at the World Bank, welcoming the participants of the opening plenary with words heard at many an event. The same applies to the facts that are supposed to call for action. According to the UN Food and Agriculture Organization (FAO), one third of all agricultural landscapes are degraded, and this amount grows by an annual twelve million hectares. If climate change is not halted, its impacts could push a further 100 million people into poverty by 2030, a World Bank survey states. Even though they are largely the result of people fleeing from crises, the migration streams of the past months have given a taste of what happens when the natural habitats of humans are destroyed. And the impacts above all affect the smallholders in the developing countries, whose survival depends directly on the natural resources. None of this is new. Neither is the fact that the measures needed cannot be taken without massive investments. So where should the money come from?

“Shall the money come from rich donor countries? Yes. Will it? No,” answered Ngozi Okonjo-Iweala, an economist and former Minister of Finance of Nigeria, drily. Quoting a recent report of the New Climate Economy Project, she said that 250 billion US dollars a year was necessary for landscape conservation and restoration measures in developing countries in order to “increase rural productivity, resilience and mitigation simultaneously.”  But a mere 25 billion was in fact made available, with 60 per cent coming from domestic budgets. Without levering more private investment, long-term support required for sustainable land management cannot be raised, Ngozi Okonjo-Iweala is convinced. But here, de-risking measures were also needed, for investors had to have security if they were to commit to the long-term investments associated with land use, she stated.

Linking smallholders, companies and the environment

Representatives of the private sector describing their motives to co-operate with smallholders at the forum also focused on triple win. Many companies had long realised that the conventional supply chain model had become obsolete. This was for a very simple reason, as Pascal de Petrini, Executive Vice-President strategic resource cycles at Danone, explained: “If the farmers aren’t resilient, our future will also be at stake. We depend on sustainable agriculture and clean water cycles.” 140,000 farmers from 40 countries annually supply the company with 7.5 million litres of milk, and 80 per cent of them are smallholders.

The Mars corporation procures its more than 100 raw materials from around one million farmers in 50 countries. “If farmers are not successful, they will try to do something else, and this is not good for our business,” said Mars chief sustainability officer Barry Parkin. Together, the two companies founded the Livelihoods Fund for Family Farming early this year. The Fund is to implement projects that will restore the environment and put degraded ecosystems back on track while improving the productivity, incomes and living conditions of small farmers in developing countries. At the event, in addition to Veolia, the Swiss fragrances and flavours company Firmenich officially joined the Fund. Why is this family enterprise opting for partnerships with the suppliers? “In 50 years’ time, we still want to be sure that we can have specialties such as cardamom or agarwood in our range of articles,” said Dominique Roques, head of naturals sourcing at Firmenich.

Small is good, upscaling is better

There are a wide range of examples of successful soil restoration at local level. However, to have an impact on climate change adaptation and mitigation and transform the current food system to more sustainability, a territorial approach is needed. But how can large-scale soil restoration really be achieved, especially in a smallholder farming context in the Global South, where some of the most severe issues with land degradation are experienced? For Ravi Prabhu, Deputy Director General of the International Center for Research in Agroforestry (ICRAF), there are two ways: the ‘hard way’, which means actively rehabilitating billions of hectares, or the ‘easy way’ – removing the problems that smallholders have in management. “We are sitting here and planning for the people, setting out from the assumption that all poor smallholders are passive. Let’s include them in our plans and share decision-making with them!” However, smallholders were interested neither in restoration nor in the issue of greenhouse gas emissions. “If they are to take appropriate measures, they have to see clear benefits,” Prabhu maintained.

What may sound good in theory is not quite so easy in practice, said Andrew Wardell, Senior Manager of Research Capacity and Partnership Development at CIFOR. How is knowledge formulated in a language that is understandable for smallholders in remote areas? “I am not certain if we already know this,” Wardell said. “It is clear that all necessary transformation processes will be knowledge-intensive and that the capacity of knowledge generating must be increased”, maintained Patrick Caron, Director of Research and Strategy at the French Agricultural Research Center for International Development (CIRAD). Stefan Schmitz, head of Division Rural Development and Food Security at the German Federal Ministry for Economic Cooperation and Development, believes that large-scale land restoration will only be feasible if the soil aspect is mainstreamed in research, education and vocational systems. Concluding the round, Wardell stressed the need to address the “fundamental problem of land appropriation”, referring to the surveys of the LandMatrix initiative according to which, between 2000 and 2014, nearly 32 million hectares of land was appropriated world-wide – with South Sudan, the Democratic Republic of the Congo, Papua New Guinea, the Republic of Congo and Indonesia being the chief target countries. Crops were only grown on 2.7 million hectares. “Is this investment or speculation?” Wardell asked hypothetically.

In addition to the discussion forums, a multitude of new initiatives were officially launched in the context of a “Launchpad”. For example, representatives of the African Union and the New Partnership for Africa’s Development (NEPAD) presented the African Resilient Landscape Initiative, which commits to bring an estimated 100 million hectares of degraded and deforested land under restoration in Africa by 2030. Fourteen African countries have declared their commitment and are to receive investments of one billion USD from the World Bank and another 600 million USD in private sector investment over the next 15 years.

While small, the Nakau Programme, the “first and only Pacific Islands regional ‘Payment for Ecosystem Services’ (PES) programme for rainforest & mangrove protection”, is no less ambitious. The Pacific island nations are suffering considerably from the impact of climate change. Only last May, for example, Cyclone Pam wrought immense destruction in the island of Vanuatu, resulting in this small state losing 65 per cent of its GDP, as Thomas Laken, Minister for Climate Change of Vanuatu, reported. Eighty per cent of the 200,000 inhabitants live in rural areas, and the natural resources, and especially forests, are extremely important for their livelihoods. But it is these resources that are particularly threatened. A major share of the indigenous people live in remote places far away from markets, infrastructure and communication. Often, the only way for them to earn a livelihood is to sign contracts with logging companies or clear forests for agriculture. The initiators of the Nakau Programme – owned by the charities Live&Learn and Ekos – seek to protect the forest by helping indigenous landowners sell carbon offsets, thus generating income for rural communities. In addition, people can find employment as forest rangers or in new activities such as nurseries or bee-keeping. Thus over 6,500 hectares of forests in Vanuatu, Fiji and the Solomon Islands is to be placed under long-term protection, and 65,000 tons of greenhouse gas emissions is to be avoided each year. Certification will be carried out in accordance with Plan Vivo Foundation’s international standard. “The programme can help the people to log their forests financially instead of physically,” said Robby Henderson, one of the trustees of the Nakau Programme.

Definitions
“The little sustainable landscapes book”, which was presented in Paris as part of the “Launchpad”, provides the following definitions:

Landscape: a socio-ecological system that consists of natural and/or human-modified ecosystems, and which is influenced by distinct ecological, historical, economic and socio-cultural processes and activities.

Landscape approach: a conceptual framework whereby stakeholders in a landscape aim to reconcile competing social, economic and environmental objectives. It seeks to move away from the often unsustainable sectoral approach to land management. It aims to ensure the realisation of local level needs and action (i.e. the interests of different stakeholders within the landscape), while also considering goals and outcomes important to stakeholders outside the landscape, such as national governments or the international community.