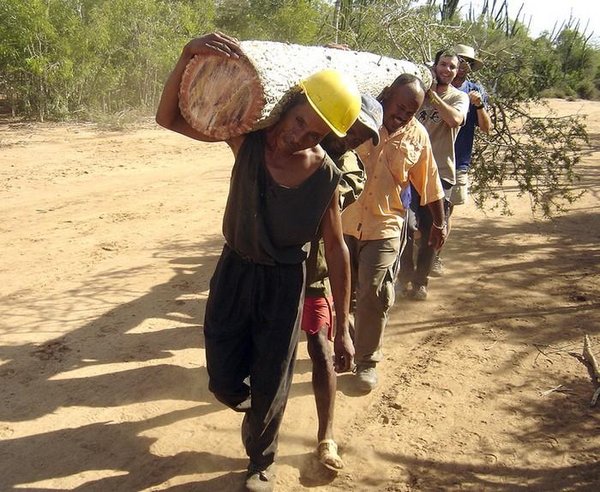 A tree cut from a dry forest in Madagascar to measure its wood density.
Photo: © Cirad/G. Vieilledent

Forest carbon stocks have been overestimated for 50 years

A formula used to calculate basic wood density has recently been corrected. Basic density is widely used to compute carbon storage by trees. French researchers estimate that the error in the initial formula resulted in an overestimation of forest carbon stocks by almost five per cent.

It may be a small correction, but it is far from negligible as far as forest ecologists and carbon cycle specialists are concerned. The error lays in a formula established almost 50 years ago (in 1971) for calculating basic wood density. Given that basic density is used to assess the amount of carbon stored in a tree, the fact that the formula had to be corrected meant that forest carbon stocks may have been overestimated by four to five per cent.

"This new formula should enable us to determine more accurately the role of forests in the carbon cycle and the impact of deforestation on climate change," , says Ghislain Vieilledent, an ecologist with the French research centre CIRAD in Montpellier who was the corresponding author of the work published in the journal American Journal of Botany on the 16th October.

For more than 70 years, CIRAD has had a database on 1,300 wood species and almost 4,500 trees. It was when they came to promote this resource that Ghislain Vieilledent and his colleagues at CIRAD and at Paul Sabatier University in Toulouse, also in France, discovered an incoherence in a conversion factor: the one used to compute the basic density of a tree based on wood density at twelve per cent moisture, which corresponds to the average wood moisture content in temperate regions.

Since this technical characteristic is widely available in wood technology databases, ecologists only have to apply a conversion factor to it in order to establish the basic density of a tree species. However, it was precisely that conversion factor that did not tally with the researchers' new calculations. They took another look at the data in CIRAD's historic database in order to determine a new formula for establishing basic density based on density at twelve per cent. The new conversion factor will be used to calculate the basic density of woods in forest ecology databases. In particular, it will serve to update the global wood density database on which Jérôme Chave and Fabian Fischer are working at CNRS-Paul Sabatier University in Toulouse, who were co-authors of the publication. The correction will make it possible to estimate carbon forest stocks more accurately and understand more clearly the role played by forests in climate regulation.

A database of 70-years' standing

CIRAD measures the technological characteristics of tropical woods and inputs them into a database launched in the 1940s. The data includes characteristics such as physical, mechanical, chemical, durability and processing properties. This information on the intrinsic properties of tropical woods comes from several thousand tests and series of trials, and now includes data on more than 1,250 tropical tree species. This priceless tool is currently being updated and supplemented by Jean Gérard, a co-author of the publication, and his colleagues at CIRAD's BioWooEB research unit.