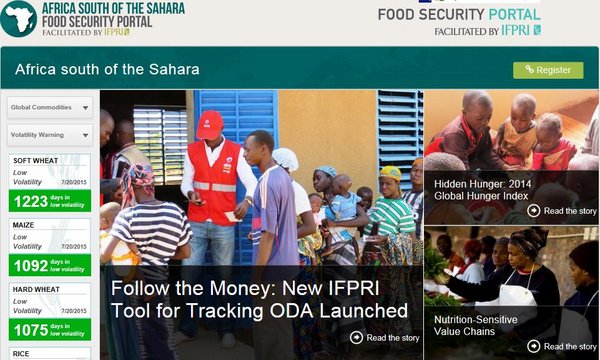 The International Food Policy Research Institute (IFPRI) provides an open data web portal on food and nutrition security in Sub-Saharan Africa. The site is meant to be a hub for researchers, stakeholders, the private sector, and policymakers to alleviate the effects of food price and climate shocks.

While Africa south of the Sahara has made substantial improvements to its food security in recent years, one in four people in the region remains undernourished. IFPRI, based in Washington, D.C., USA, has launched a new web portal that focuses on agriculture, food security, and nutrition in Africa south of the Sahara has been designed to strengthen capacity for timely food security information, policy research, and analysis to ensure the continued improvement of the region’s food and nutrition security.
“The portal will host a broad set of open data related to food and nutrition security and early warning mechanisms, as well as opportunities for dialogue among policy-makers, researchers, the private sector, and other stakeholders,” says Maximo Torero, Director of the Markets, Trade and Institutions Division at IFPRI.

The blogs on the portal provide detailed summaries of recent research on a variety of topics related to food and nutrition security, including food access, input markets, and risk and resilience. IFPRI hopes that this environment of open information-sharing and dialogue will help to increase the resilience of the region’s poor to possible food-related crises, including price and climate shocks.

According to IFPRI, the portal also hosts a series of interactive maps tracking important economic and agricultural indicators throughout the continent, including cereal yields, harvest times, and soil composition. But as Torero points out, the portal’s major innovation will be its people.
Interaction will include virtual dialogues to be hosted on the site beginning this summer. The dialogues will feature both a live panel discussion with experts in the field of food and nutrition security as well as an open online discussion forum and will discuss such topics as climate change adaptation, women’s inclusion and using value chains for enhanced nutrition.
Earlier this year IFPRI already opened a similar food and nutrition security web portal for Central America.