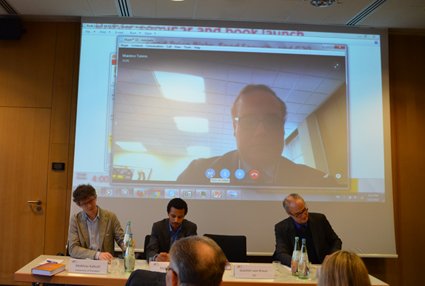 The participants of the seminar warned of a new era of protectionism that could stifle much needed investment in agriculture.
Photo: © Center for Development Research

Food price risks were discussed at a seminar in Bonn, Germany marking the launch of a book covering research conducted by ZEF and IFPRI on the issue.

Considerable price swings on global agricultural markets that set in with the 2007/08 financial crisis have caused concern over the stability and reliability of the global food system. The 1974 world food crisis triggered public investment in agricultural innovation and prompted the founding of the International Food Policy Research Institute (IFPRI) as well as the International Fund for Agricultural Development (IFAD). In comparison, however, the 2007/08 food crisis saw no quick response on the part of the United Nations, and institutions were slow to implement reforms or left them incomplete, Joachim von Braun, Director of the Center for Development Research (ZEF), told a public seminar on “Food Price Risks, Food Security and G20 – Policy lessons from a new book” held in Bonn, Germany, in mid-February. Von Braun also contrasted the slow progress made in addressing the 2007/08 food crisis with the fast pace of developments in trade policy. Deregulation was gaining momentum, while Donald Trump’s election in the USA could be ushering in a new era of increased protectionism.

The event highlighted the new publication “Food Price Volatility and its Implications for Food Security and Policy”, authored by Matthias Kalkuhl, Joachim von Braun and Maximo Torero. The book sums up the results five years of intensive collaborative research conducted by Bonn University’s ZEF and IFPRI focusing on the stability dimension of food security, the causes and consequences of extreme events in food markets and what can be done to counter them.

Matthias Kalkuhl, a Professor on Climate Change, Development and Growth at the University of Potsdam, discussed various new drivers of food price volatility such as financialisation, real-estate transactions, cross-asset spill-overs and futures. Speculation, while accounting for 20-30 per cent of price increases, does not appear to have such an impact on price volatility. Global commodity prices appear to affect domestic food prices to a varying extent. Over longer periods, higher prices lead to more investment and more jobs. Food prices impact on consumption in various ways, and may also affect non-food prices. In 2008, the price of Afghan wheat rose by 50 per cent, reducing consumption by 40 per cent, although poorer people nevertheless remained above the minimum caloric intake level.

Co-author Mekbib Haile, a senior researcher at ZEF, told the seminar that the 2006–2010 period had seen huge food price increases as well as a greater level of volatility compared to the previous 20 years, and noted that unlike price increases, volatility was not an incentive for investment. Furthermore, global food supply responded positively to food prices increases, but not to price volatility. In the wake of the 2008 food crisis, volatility more than cancelled out growth in global wheat production brought about by price increases. Farmers needed better access to information on prices to reduce forecasting errors. The research had shown that this above all applied to relatively young farmers and those living far away from the markets. Coping with volatility thanks to better information could generally enhance food security.

Attending the seminar via a video link with Lima, Peru, Maximo Torero, Executive Director for Southern American Countries at the World Bank and former IFPRI Division Director, referred to some general international development trends. He warned that big climate shocks could exacerbate price volatility, the potential risk being not only temperature rise but also climate variance. The frequency of famines appeared to be on the increase. The world economy was set to grow two- or even threefold up to 2050, with 60 per cent of the global poor then living in fragile states. Torero stressed that access to food was paramount, while food sovereignty came second, and he warned that import tariffs could put a heavy burden on the poor. He welcomed the internationalisation of food markets and pro-trade policies improving food availability, although he also cautioned that trade openness was creating greater inequality. Furthermore, instruments like AMIS, the Agricultural Market Information System, but also insurances, could boost resilience.

Stefan Schmitz, Deputy Director General of the German Federal Ministry for Economic Cooperation and Development (BMZ), called for better infrastructure and more innovation in the food sector. Germany’s G20 Presidency was focusing on youth employment, and Development Minister Gerhard Müller was campaigning for more investment by the private sector, although this generally required better functioning markets.

The discussion centred above all on whether the world was now better prepared to respond to food crises. Kalkuhl maintained that there had been improvements such as the setting up of AMIS, although developing countries had to expand their safety nets, which in turn required more funding. Haile held that countries were now better prepared and were also responding better and giving more attention to the food sector. Torero was less optimistic. “We’ve just been very lucky,” he remarked. “Countries aren’t really prepared for a world of uncertainty. Food resilience must be increased.” This was backed by Schmitz. “Resilience has to be at the centre of development co-operation,” he noted. “We have to help countries cope with uncertainty.”

Coming back to price volatility, von Braun noted that while speculation did not matter in normal circumstances, it acted as a spike booster when spikes occurred. He also noted that immediately after US President Donald Trump’s signing of a directive aimed at reversing the Dodd Frank Act, passed by US Congress to protect consumers from bad investment, “fishy financial instruments” were emerging again that disturbed food and other markets. Furthermore, von Braun warned of looming protectionism that could stifle much needed investment in agriculture.