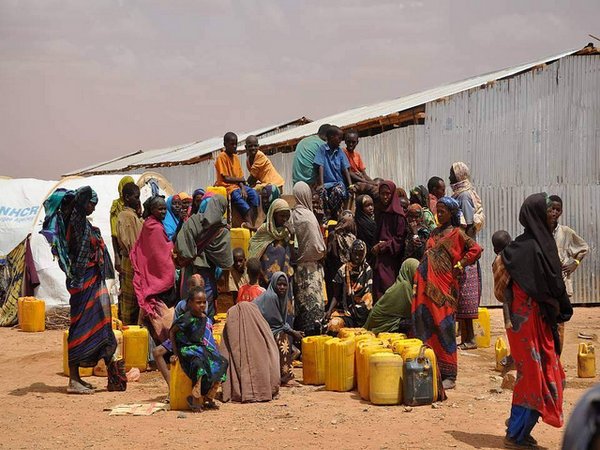 Once the Ethiopians in Dolo Ado have been registered, they are able to get access to an allocation of 8-10 litres of water per person per day. This has to meet all of their needs, for drinking, cooking and washing.
Photo: © Cate Turton / Department for International Development

The number of people in the world facing severe food insecurity has risen again during the last year, according to the Global Report on Food Crises. Conflicts and climate are the key drivers of food insecurity.

Some 124 million people in 51 countries were affected by acute food insecurity during 2017, 11 million more people than the year before, according to the latest edition of the Global Report on Food Crises published in March 2018.

The increase is largely attributable to new or intensified conflict and insecurity in Myanmar, north-east Nigeria, the Democratic Republic of Congo, South Sudan and Yemen. Prolonged drought conditions also resulted in consecutive poor harvests in countries already facing high levels of food insecurity and malnutrition in eastern and southern Africa.

It finds that food crises are increasingly determined by complex causes such as conflict, extreme climatic shocks and high prices of staple food often acting at the same time.

Conflict and climate disasters are main drivers of food insecurity

Climate disasters, mainly drought, were also major triggers of food crises in 23 countries, two-thirds of them in Africa, and were responsible for pushing some 39 million people into acute food insecurity.

Conflict will likely remain a major driver of food crises in 2018, affecting Afghanistan, Central African Republic, Democratic Republic of Congo, north-eastern Nigeria and the Lake Chad region, South Sudan, Syria and Yemen as well as Libya and the central Sahel (Mali and Niger), according to the report.

Yemen will mostly likely continue to be the largest food crisis by far. The situation there is expected to deteriorate, particularly because of restricted access, economic collapse and outbreaks of disease.

Meanwhile, the impact of severe dry weather on crop and livestock production is likely to heighten food insecurity in pastoral areas of Somalia, south-eastern Ethiopia and eastern Kenya, and in West African and Sahel countries including Senegal, Chad, Niger, Mali, Mauritania and Burkina Faso.