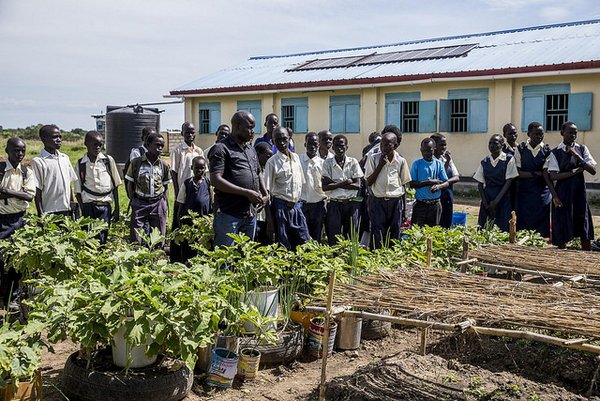 Owing to on-going civil war, South Sudan has been plagued by a major humanitarian crisis for several years. More than half of the population are suffering hunger. With the support of the Swiss Agency for Development and Cooperation (SDC), the United Nations Food and Agriculture Organization (FAO) launched an urban gardening project in 2015. Around 6,500 families benefited from the project.

Having gained independence in 2011, South Sudan slid into a civil war in 2013 that has since claimed tens of thousands of lives and turned millions into refugees. As a result, the population of Juba has exploded. A semi-rural, large-scale settlement has become a city of 900,000 inhabitants; the internally displaced persons no longer have access to their fields and cannot afford the vegetables sold on the market. Food prices are soaring, above all owing to currency fluctuations and a high rate of inflation. Families lack just about everything.

In order to boost the resilience of the crisis-shaken population, with the support of SDC, the FAO launched an urban gardening project in Juba and its surroundings in 2015. People were trained in growing vegetables in order to strengthen the livelihoods of their families. They sold the share of the harvest they did not need for themselves on the local markets. With the money they earned, they were able to buy staple food such as sorghum.

Around 6,500 families benefited from the project, which finished in late 2018. They were provided with a selection of local vegetable seeds, tools such as watering cans, kettles, shovels and rakes. They attended courses to learn how to raise their yields and make efficient use of water resources. In addition, they were given basic apiary equipment with modern beehives, honey jars and smokers.

In order to restart food production and create new prospects, small urban enterprises were set up too. Around 200 women and young producers learnt how to sell their food produce. Training included both marketing and drawing up business plans and aspects such as preserving and packing, in which solar driers and coolers are now being used.

Training also incorporated fish workshops in which participants were able to acquire useful knowledge about the nutritional value and cost efficiency of this food. Furthermore, they got to know about various fish species as well as drying and smoking methods. Now contracts with supermarkets and hotels are to follow for the distribution of the products.

The impact of the prolonged conflict
According to the UN, around 7.1 million people in South Sudan require emergency support in the areas of food supply and agriculture. An estimated 1.1 children under the age of five years are threatened by acute malnutrition, while more than 260,000 are already seriously undernourished. The prolonged conflicts are having a devastating impact on agricultural production. Restricted access to health services and a lack of sanitation are making the situation even worse. In addition, there is the migration of people. The country has 1.84 million internally displaced persons. And then there are 2.5 million people who have fled to the neighbouring countries of Ethiopia, Kenya, Uganda, Sudan and DR Congo.

This article is an abridged version of “Urbaner Gartenbau gegen den Hunger” by Zélie Schaller, which was published in the journal “Eine Welt” run by the Swiss Agency for Development and Cooperation (SDC).