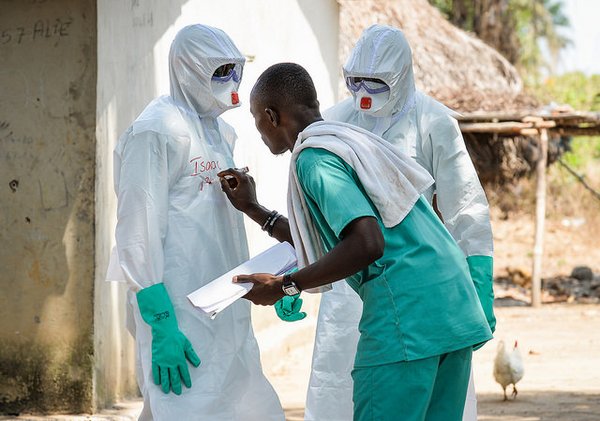 Before the team goes into a home to decontaminate it, they are carefully kitted out in their safety suits. Health management at the outbreak in Sierra Leone .
Photo: © Corporal Paul Shaw/MOD

Fighting against Ebola in DRC

The implementing of a ring vaccination is to check the outbreak of Ebola outbreak in the Democratic Republic of the Congo. The outbreak was officially declared on the 8th May 2018. So far, three health zones in the north western Equator Province have been affected.

The outbreak of Ebola virus disease in the Democratic Republic of the Congo (DRC) continues to evolve, the World Health Organization (WHO) states in its  External Situation Report 4, which was issued on the 20th May 2018.

The Report states that 51 cases of Ebola have been recorded in DRC, including 27 fatalities. The first cases occurred early in May, the outbreak was officially declared on the 8th May 2018. This is the ninth Ebola virus disease outbreak in the Democratic Republic of the Congo over the last four decades, with the most recent one occurring in May 2017.
Three health zones in the north western Equator Province of DRC have been affected: Bikoro, Iboko and Wangata. Bikoro, a remote rural town, remains the epicentre of the outbreak, accounting for 56.9 per cent of all reported cases and 81.5 per cent of all deaths. But urban areas are also affected. Wangata, a city of nearly 1.2 million people, is one of the three health zones of Mbandaka.

Currently, the WHO considers the public health risk to be very high at national level. This is due to the serious nature of the disease, insufficient epidemiological information and the delay in the detection of initial cases, which makes it difficult to assess the magnitude and geographical extent of the outbreak. At global level, the risk is currently considered low.

Based on currently available information, the WHO advises against the application of any travel or trade restrictions to Democratic Republic of the Congo.  As of the 18th May 2018, 20 countries have implemented entry screening for international travellers coming from Democratic Republic of the Congo, and currently, no restrictions of international traffic are in place.

The WHO Report points out that information about the extent of the outbreak remains limited and investigations are on-going.

The Government of the DRC, with the support of the WHO and partners, is preparing to vaccinate high risk populations against Ebola virus disease in affected health zones. They are implementing a ring vaccination with the yet to be licensed rVSV-ZEBOV Ebola vaccine, whereby the contacts of confirmed cases and the contacts of contacts are offered vaccination.
A ring vaccination strategy relies on tracing all the contacts and contacts of contacts of a recently confirmed case as soon as possible. Teams on the ground have stepped up the active search and follow up of all contacts. More than 600 had been identified to date, the WHO reported on the 21st May 2018.
The vaccine was shown to be highly protective against Ebola in a major trial in Guinea in 2015. Among the 5,837 people who received the vaccine, no Ebola cases were recorded nine days or more after vaccination.

While the vaccine is awaiting review by relevant regulatory authorities, the WHO’s Strategic Advisory Group of Experts on Immunization (SAGE) has recommended the use of the rVSV-ZEBOV Ebola vaccine under an expanded access/compassionate use protocol during Ebola outbreaks linked to the Zaire strain, such as the one on-going in the DRC.