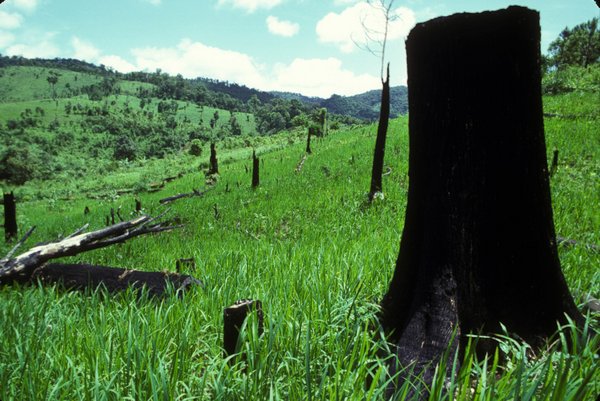 Deforestation in Thailand: The great forests of Thailand are being rapidly destroyed by people desperately in need of land for cultivation.
Photo: © FAO/Florita Botts

Feeding the world without further deforestation is possible

It is possible to feed the world without recourse to further deforestation, according to scientists. This is all the more probable if there is a reduction in consumption of animal-based foods.

Deforestation is necessary to feed the growing global population – this is a common belief that has now been disproved by researchers of the Institute of Social Ecology, Vienna. In a study published in April 2016 they present results that reveal that it is possible to produce sufficient food for the globe in 2050 while at the same time maintaining the world’s current forests.

The researchers have conducted comprehensive calculations to assess the options for feeding the global population in the year 2050 in a hypothetical world of zero-deforestation. Taking a variety of key factors into consideration - including agricultural technology (e.g. yields, land-use intensity), various livestock systems, the extent of land as cropland or as grazing land, as well as human diets (vegan, vegetarian, modest consumption of meat, etc.) - they discovered that some 60 per cent of the 500 calculated scenarios would be feasible options.

The preservation of forests becomes more difficult, the more animal products are consumed

According to the researchers, human nutritional behaviour is the most important component. If the world’s population followed a vegan diet, all combinations of parameters, even those with lowest yield levels and low cropland expansion, would be feasible. With a vegetarian diet, 94 per cent of all of our calculated scenarios would be feasible.

The results clearly indicate that the preservation of forests becomes more difficult, the more animal products are consumed. In the case of a diet that involves a high percentage of meat, only 15 per cent of the 500 original options would permit the preservation of the forest areas. And these scenarios are based on intensive levels of agricultural management as well as massive expansion of cropland into areas now used for grazing.

Organic farming to feed the global population - a possible scenario

Based on a mainly vegan or vegetarian lifestyle it would be even conceivable to supply the global population by means of more extensive agricultural forms, such as organic farming, and simulta-neously preserve forest areas, according to the researchers.

At the same time, livestock farming and using areas as grazing land would also have positive ef-fects. Certain areas, for example, that cannot be used for cropping would contribute to food pro-duction as grazing areas. A major prerequisite to ensure food security, say the authors of the study, is to reduce the amount of goods wasted and to ensure a global fair trade in foodstuffs.

The aim to provide sufficient food for the entire global population leads to an important trade-off, say the researchers: this either means that land use will have to be ramped up and extended to areas such as natural grasslands – areas that are currently used, e.g. for subsistence agriculture, and host a considerable fraction of the global biodiversity. Alternatively, this might result in a massive rise in global food trade flows, as many regions will not be able to feed their population domestically, even in a world where global production would be sufficient on the average.

This is a potential thread for food security for regions with low purchasing power that already today rely on food imports, such as large parts of Sub-Saharan Africa. Shaping these global trade interrelations in a sustainable manner poses a considerable challenge, however, because institutions that would be able to govern the balance between supply and demand at the global level are currently absent or only barely developed.