The debate on sustainability also has to reassess the issue of ethics and the economy: acting in solidarity versus the accumulation of capital in one hand. As a basic principle of acting in solidarity in economics, the notion of cooperatives is becoming ever more relevant in days of unfettered financial markets. Organised farmers’ self-help based on the principle of solidarity contributes to overcoming the feeling of being powerless among the underprivileged rural population, both in the South and the industrialised North. 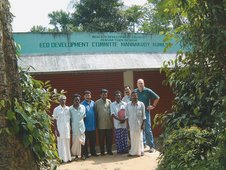 In analogy to politics, managing in solidarity appears as a fundamental democratic concept for economic activities, with equal rights and equal responsibilities for everyone involved, equal participation in the profits gained in solidarity, democratically shared powers with a members’ assembly as the respective organisation’s sovereign and legislative, and elected executive boards and elected supervisory boards as regulatory bodies. Another crucial fundamental principle is that voluntary participation observing the independence of each participant is ensured, that membership can be resigned at any time, as opposed to forced collectivisation, as was the rule in the former socialist-state capitalist systems, to the detriment of the notion of cooperatives.
The legal framework for managing in solidarity is provided by the basic model of the statutory cooperative. However, in countries in which the influence of the state or big business is too dominant, democratic managing in solidarity may also take place in the legal form of economic associations or partnerships, or in joint stock companies, provided that the basic principle is established in the respective constitution.  A further basic principle is that each member’s personal property always has to be safeguarded and protected from asset losses, and members must always be entitled to their share of what managing in solidarity yields.

Frequently, well-meant models of managing in solidarity fail when they are implemented. In the author's experience, absolute transparency within the organisation is essential if the “powers that be” are to practice the notion of solidarity rather than enriching themselves. Furthermore, the organisation has to be ready to enter into obligations. Many farmers’ associations suffer from only the profit from passing on members’ products to consumers being distributed among the producers. But this is the wrong approach, and it will not lead to the necessary level of market efficiency. The actors of managing in solidarity always have to be aware that they are expected to be more efficient on the market than the rest of the economy. Here, entering into an obligation means that the organisation guarantees its members that their produce is sold at the correct price and payment is performed at the date fixed. In return, the members have to observe their responsibilities regarding quality and a neutral control of production. Only in this manner can managing in solidarity make sense. To participate with fair prices in the value added chain, the individual member has to be able to gain value added vis-à-vis the private sector.

The basic tendency of free capital markets results in rural societies becoming underprivileged. This phenomenon occurs not only in emerging economies but also, and in particular, in the highly industrialised centres of the Western world. Farmers are the economic losers, earning only a rudimentary share of the product's price when it reaches the consumers. The lion’s share remains in trading, and the value added chains are dominated by corporate market power. The largest food corporations world-wide, such as Nestlé or Unilever, operate with a shareholder value of well over 15 per cent of their billions worth of turnover, with the original producers working at subsistence level. Farmers’ self-help and managing in solidarity has to result in a reversal of value added.

Managing in solidarity in the exchange of economic goods also ought to be given the status of a fundamental principle in an international context. Fair prices and producer groups from different continents dealing with one another on a partnership basis, at eye level, result in an elimination of economic inequality, whereas technical cooperation often merely treats the symptoms.

Farmers’ self-help organisations become the key force in regional development as well as in political participation, both in the countries of the South and here in Central Europe. Only too often, though, development is defined via industrial growth; what is needed is a recollection of “Integrated Rural Regional Development” models, which guided technical cooperation in the 1970s and 1980s.